As pope waits on deck, Phillies staff prepare for his visit 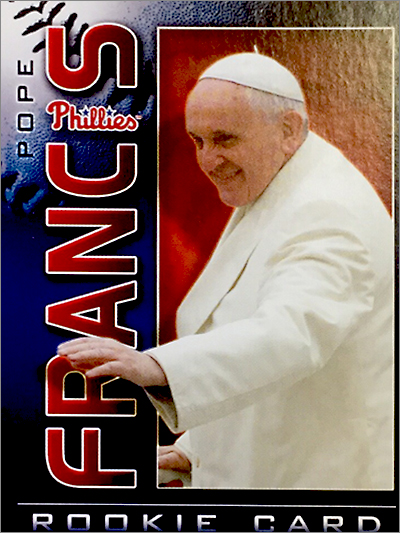 The contrast of tranquility could not have been more palpable.

On the field at Citizens Bank Park Wednesday night, Sept. 16, the Phillies were fumbling, stumbling and no doubt mumbling amidst a 12-2 blowout and three-game sweep by the Washington Nationals.

Meanwhile, inside the vast media area that is directly in back of home plate and along the first-base line, several different Phillies employees wore calm smiles and enlightened frowns, the kind that indicate trying to find the right words to describe something complex, yet simple, and definitely meaningful.

That’s what talking about Pope Francis can do … turn an eminently lousy, forgettable baseball game played by the team with the Major League’s worst record into a spirited, memorable, enjoyable conversation among traditional Catholics.

It was giveaway day at the park, and this keepsake was more creative than ever. The Phillies had provided Pope Francis “rookie cards” to the 15,753 in attendance.  Phillies employees had already been given one the night before, but many wanted a few more.

In charge of distributing those suddenly high-in-demand souvenirs to the media was Ed Deal. A 1963 Roman Catholic High School graduate from St. Dorothy Parish in Drexel Hill and retired from his 32-year career in the federal government, Deal has worked part time for the Phillies since 2000. A press-box steward who supplies security, assists the public relations department and gives occasional ballpark tours, Deal was occasionally approached by several media types. Their goal was to snatch an additional card or two, ostensibly to give to family, friends, etc. 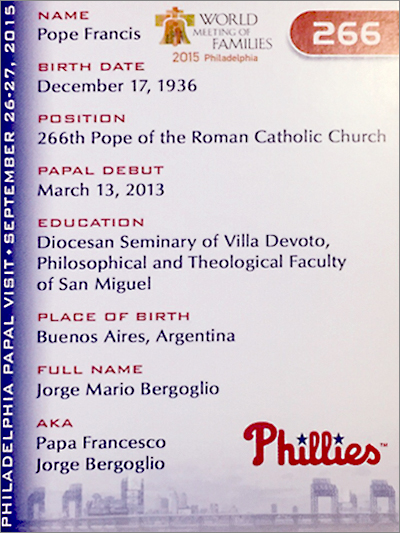 The back of the keepsake card shows Pope Francis’ “statistics.” He is only the 266th person at his position in the history of the league, i.e., the universal Catholic Church.

Before acquiescing, Deal good-naturedly asked if they had been to confession lately. Armed with an extra memento, they walked away grinning.

Providing Catholic evangelization, it would appear, is not rocket science.

“It’s interesting,” said Deal, 69, a married father of two and grandfather of six (another is on the way) whose wife Maureen is an Archbishop Prendergast alum. “You can tell that everybody loves this pope.”

On Sept. 26-27, Pope Francis will grace Philadelphia with his presence. His agenda is obviously packed to the hilt, but the coup de grace will be celebrating Mass near the Art Museum. More than a million people are expected to attend, and countless more who either couldn’t acquire a ticket or were unable/unwilling to brave the elements will worship from afar.

A 40-year daily communicant, Deal will not be one of them.

“Let the younger people go,” he said. “I’ll be with them in spirit as I watch from my television set.”

When St. John Paul II celebrated Mass in Philadelphia in October 1979, Deal and his family were in attendance. They had taken the bus along with other St. Dorothy parishioners, but smartly, Deal had dropped off his car near the Art Museum the night before.

So when Mass was over, Deal quickly headed toward the Overbrook train station on City Line Avenue. Because the pope was staying at St. Charles Borromeo Seminary, Deal assumed that the Holy Father’s entourage would eventually have to drive back home. Deal’s pre-planning paid off handsomely when the pope passed by.

Stating that he didn’t want to dwell too much on politics and how the city of Philadelphia needs to start voting for candidates who embrace a Catholic Christian philosophy, in particular pertaining to the pro-life movement, Deal said that while it is “great” that Pope Francis is beloved, people need to focus on whom the man represents.

“For a variety of reasons, Philadelphia has welcomed this since it was announced,” said Deal. “Some consider him like a rock star because he is nice and kind and has great messages. Hopefully, they recognize that Pope Francis is the Vicar of Christ. That’s what makes something like this so special.”

About 15 yards away, Deacon Frank Urmson took his seat inside the press elevator. After serving as a Phillies host from 2003 to 2013, he is now the first person journalists see as they ascend to the media area adjacent to the Diamond Club at the park.

But being an elevator operator doesn’t mean his responsibility, is, ahem, an up and down challenge.

If anyone knows about meeting a pontiff, it’s Deacon Urmson. A 1970 graduate of since-closed St. James High School and a longtime theology teacher at since-closed Cardinal Dougherty and, since 2010, Archbishop Wood, he was ordained a permanent deacon in 1999. He currently serves his parish, St. Helena’s in the city’s Olney section, where he and his wife Regina raised four children now aged between 21 and 31.

Before choosing marriage as his vocation, Deacon Urmson studied to be a priest and was slated to graduate from St. Charles Seminary in 1985. When St. John Paul II visited the seminary during his 1979 trip to Philadelphia he met with priests and seminarians, and Deacon Urmson shook the pope’s hand.

Amazingly, this was the second time that Deacon Urmson had met the pope. Three years earlier, in 1976, the pope was then known as Cardinal Karol Jozef Wojtyla, and he was a close friend of the late Cardinal John Krol, then the Archbishop of Philadelphia. At the Eucharistic Congress hosted by Philadelphia, Cardinal Krol had organized a Mass for people of Polish descent, and Deacon Urmson attended as special guest escort.

After Mass he drove Cardinal Wojtyla back to the seminary. Little did he know the spiritual journey that awaited his passenger. Deacon Urmson vividly recalls what Cardinal Wojtyla said before departing.

“He asked me, ‘What can you do to change the church in Philadelphia?’” Deacon Urmson said. “I said that there wasn’t a heckuva lot I could do. I remember that he looked at me and said, ‘Pray about it.’”

Fast forward to 1979 and the aforementioned handshake. When the pope faced Deacon Urmson, he firmly cupped the young man’s hand with both of his own. The Holy Father looked directly into Deacon Urmson’s eyes, and said, ‘So this is how you decided to change the Church in Philadelphia.’”

A part of Deacon Urmson’s stunned internal countenance remains as still now as it was 36 years ago. How in God’s good name had Pope John Paul II remembered having met Deacon Urmson, let alone recall what he had said, several years earlier?

So when broadcast legend Walter Cronkite announced on the airwaves that Cardinal Wojtyla had been elected pope in 1978, Deacon Urmson was “absolutely startled” when he heard the news.

“I attribute many things in my life to him,” said Deacon Urmson, who, like St. John Paul II, has persevered through the years despite potentially debilitating physical ailments. “It’s something that I have thought about many times.”

Deacon Urmson will join numerous deacons and priests at a Pope Francis-led Mass inside the Cathedral Basilica of SS. Peter and Paul. Perhaps just a bit less star-struck by the incredible honor of attending the celebration — only because of his past experiences with St. John Paul II — Deacon Urmson said the timing of Pope Francis’ visit to Philly is significant.

“There’s been a lot of concerning things going on in and around the church, and for the Vicar of Christ to come here now, it’s almost as though God is stepping in and intervening,” Deacon Urmson said.

Now in her 20th year as a theology teacher at Little Flower High School, Maureen Gillespie could have chosen to take the World Meeting of Families events and subsequent papal visit as a personal vacation. Instead, she will be traveling daily from her home near St. Bridget Church in East Falls to center city Philadelphia.

“I got tickets for all the ticketed events,” said Gillespie contentedly. “Opportunities like this don’t come around very often.”

For the past 11 years, Gillespie has been employed part time for the Phillies in both the suite box area and pressroom dining room. The 1991 Cardinal Dougherty High School graduate who grew up in Lawncrest’s St. William Parish has seen her share of giveaway goodies, but none like the Pope Francis rookie baseball card.

“A lot of people are talking about it,” Gillespie said. “It’s neat. I’m lucky because at school, obviously we are all talking about the pope’s visit. It’s a great source of conversation.”

Gillespie considers herself “blessed by the communities I work with.” She said her longevity at both Little Flower and the Phillies is inspired by those around her.

“Terrific people at both places,” said Gillespie. “Really good people. I’m asked why I stay so long at one place … why would I ever want to leave?”

In 1979 Gillespie, her brother Bill (a 1995 graduate of St. Joseph’s Preparatory School and now a guidance counselor at his alma mater), and her parents did not attend the papal Mass on Logan Circle, but they did return shortly thereafter and had a picture taken at the makeshift altar that still remained.

“At least we were able to see a part of it,” she said. “This time will be even more special.”

On Oct. 4, on the last day of baseball’s regular season, the Phillies will honor Alex Sermarini for his 25 years of service. His wife and daughter in law will be on the field with him while his five children, 13 grandchildren and seven great-grandchildren will undoubtedly beam with pride wherever they are.

After a career in construction from the age of 18 to 65 as a bricklayer, Sermarini has epitomized loyalty as an employee of the Phillies, whether in clubhouse security (year round), as a public relations assistant in the media room, or a security aid.

“In 25 years, if I missed five games, that would be a lot,” he said. “I love it. It gets me going. They’re going to have to carry me out of here. It’s a good group to work with. The owners, (former general manager) Ruben Amaro, who was always to nice to me … it’s a great organization to be a part of.”

Sermarini’s mother died when she was only 41 and he was in sixth grade. In 1953, he graduated from St. Agnes School in West Chester and, 18 years later, from St. Joseph’s College (now University).

Classifying the pope’s visit as a “great thing,” Sermarini has been annoyed at what he labels “the nonsense of putting up fences” and preventing people from attending because of exorbitant security fears.

“Of course safety is important, but so is giving access for everyone to share in the event,” Sermarini said. “Everyone wants to be a part of it. Catholics. Protestants. This pope speaks to everyone.”

As the papal Mass is being celebrated, Sermarini will join several of his fellow parishioners from St. Dominic Parish in Northeast Philadelphia in the parish auditorium.

Asked what he thought about the Pope Francis rookie card, Sermarini shared an idea that would undoubtedly be extremely profitable.