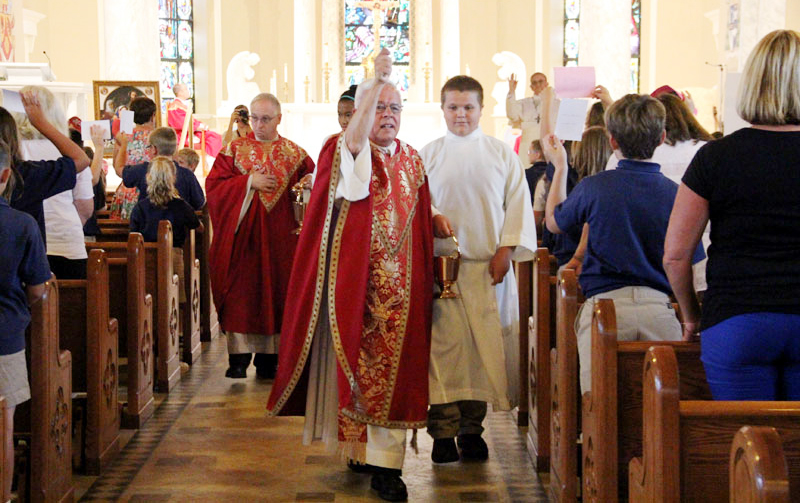 Fr Mike Davis and Msgr. John Marine walk through the aisles and bless as students hold up pictures of their families

The first Mass of the school  year at St. Katharine Drexel School in Holland was a family affair, a theme prompted by the upcoming World Meeting of Families and the visit to Philadelphia by Pope Francis. The Mass, held on Sept. 9 at St. Bede the Venerable Parish, where St.Katharine School is located, brought students and families together for a special blessing by Msgr. John C. Marine  and Parochial Vicar, Father Michael Davis. Posters and collages showed students’ families at celebratios, vacations and other special events.

The liturgy also marked the unity of the three schools that became on in 2012, when St. Bede the Venerable, St. Vincent dePaul, and Assumption BVM schools merged as one, and took a new name to honor St. Katharine Drexel, the Bensalem nun who founded the Bensalem-based Sisters of the Blessed Sacrament to serve blacks and Native Americans around the country.

Msgr. John Marine sprinkles holy water to bless the students of St. Katharine Drexel School and their families, represented by pictures held up by each child. 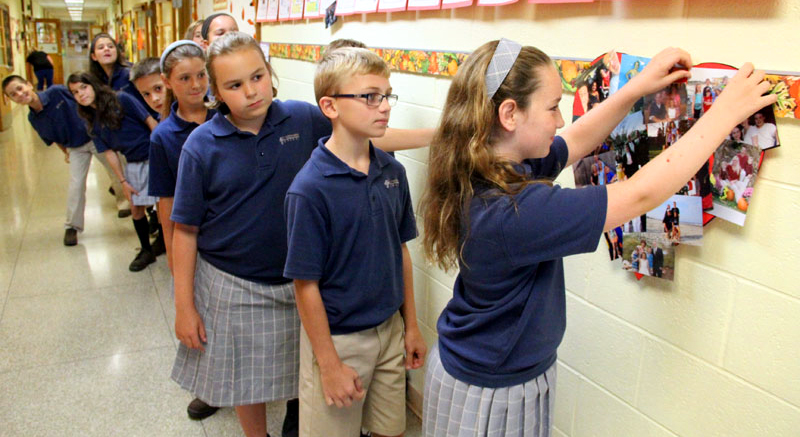 Carolyn Connolly puts the finishing touches on her fifth-grade class’s “Heart of Families,” one of the projects that St. Katharine Drexel School students worked on to mark the World Meeting of Families. 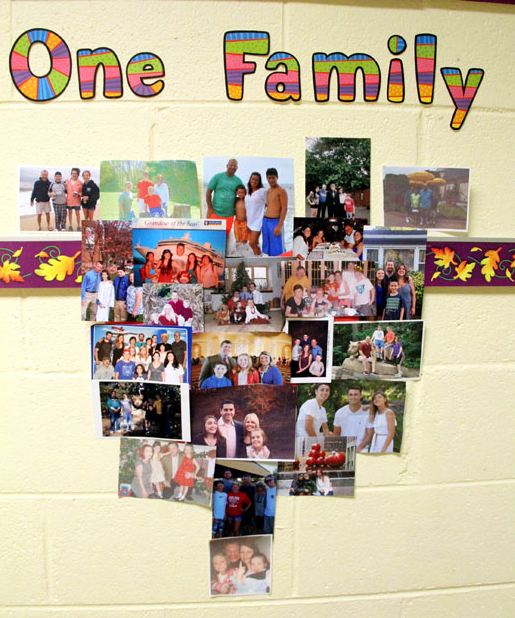 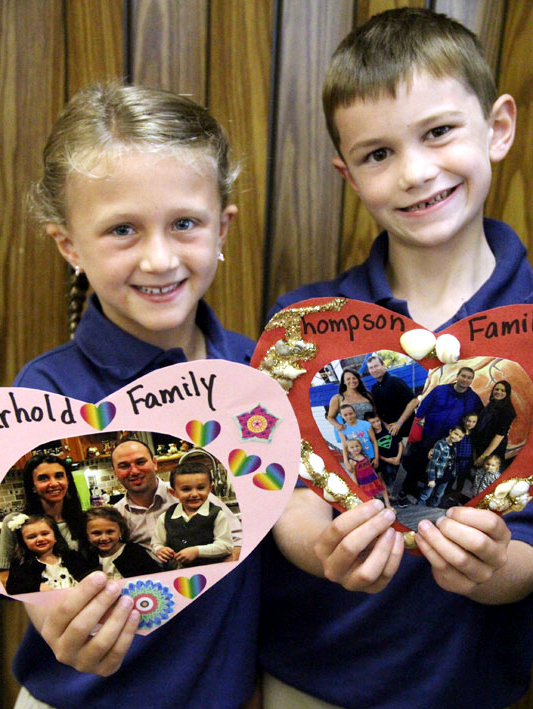 The smiles on the faces of Olivia Weatherhold and JM Thompson reflect the happy expression on their families’ faces.. 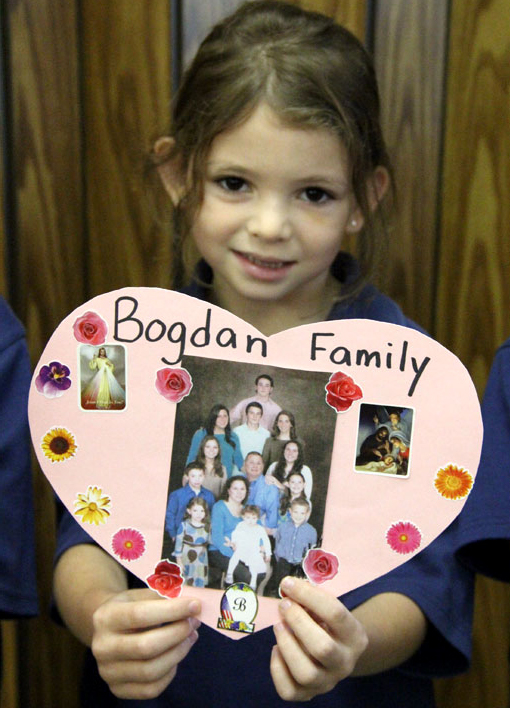 Love, faith and family is the message Sara Bogden portrays in her heart-shaped collage. 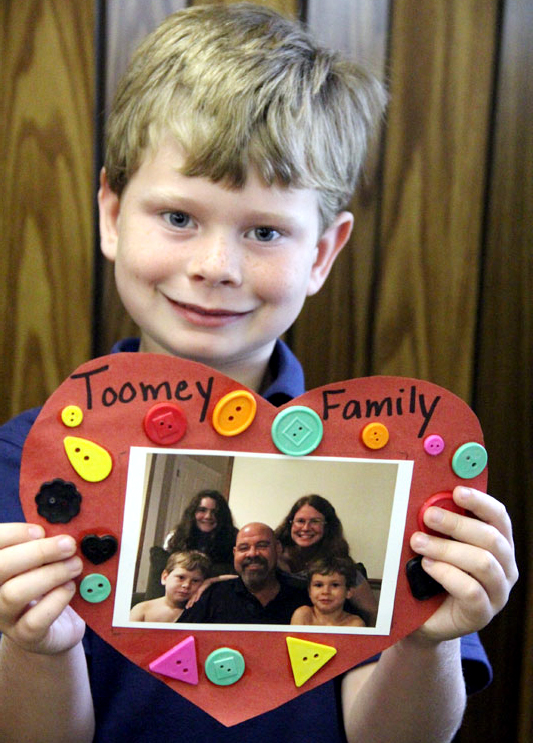 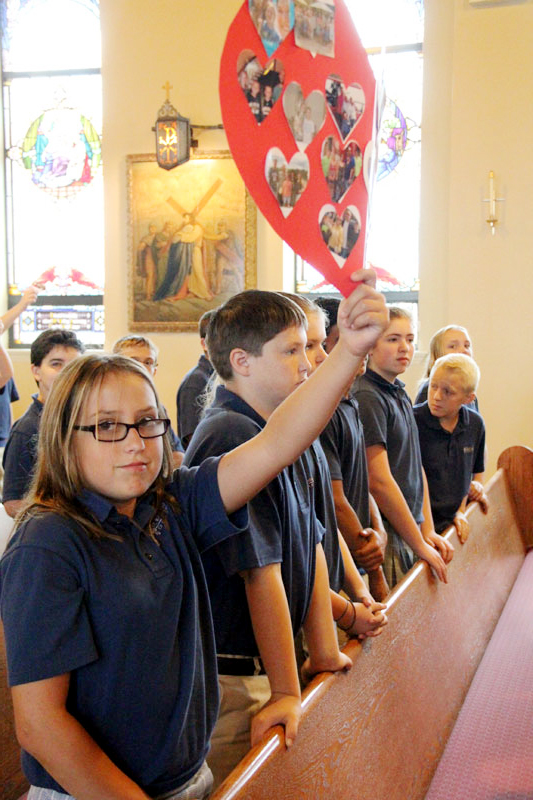 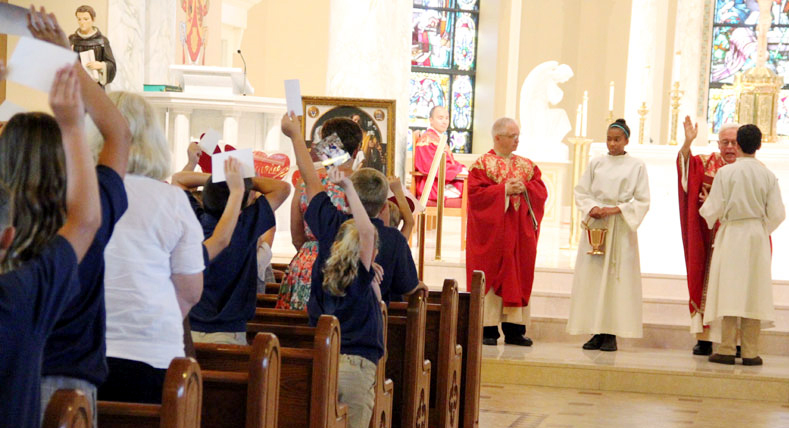 Msgr John Marine blesses students and their families who were at the Mass or were represented by their pictures held aloft. 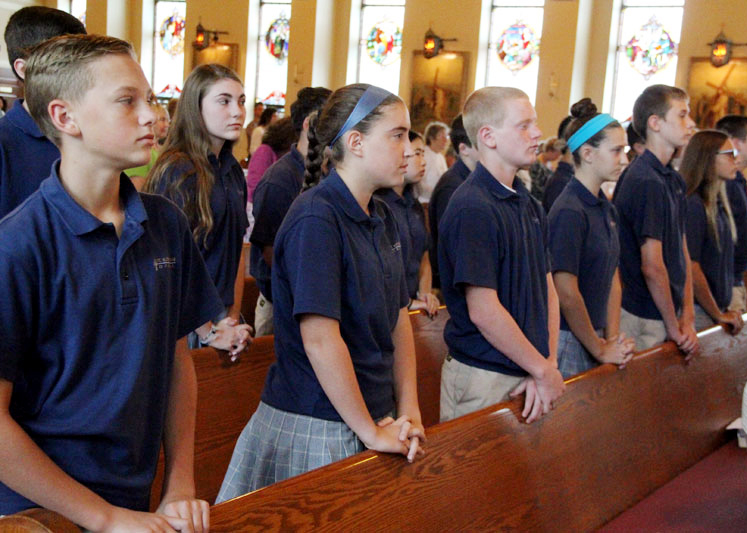 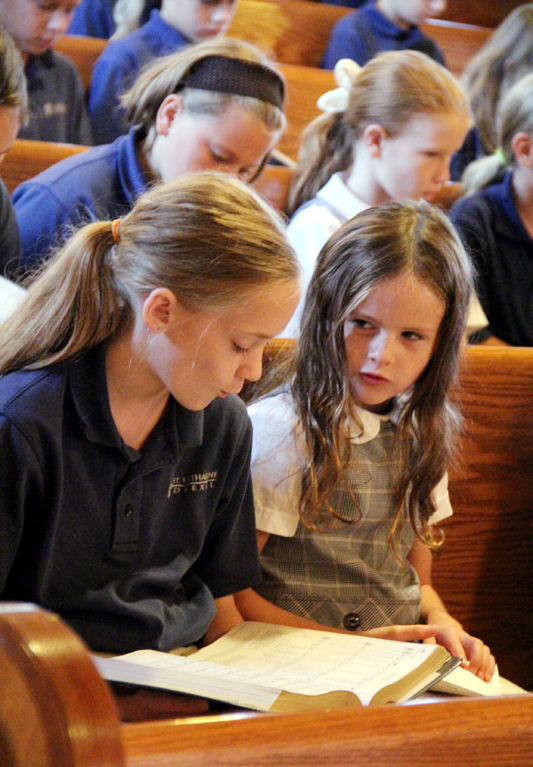 Fourth graders Abby McGrody and Kaitliyn Holloran contemplate one of the liturgical readings. 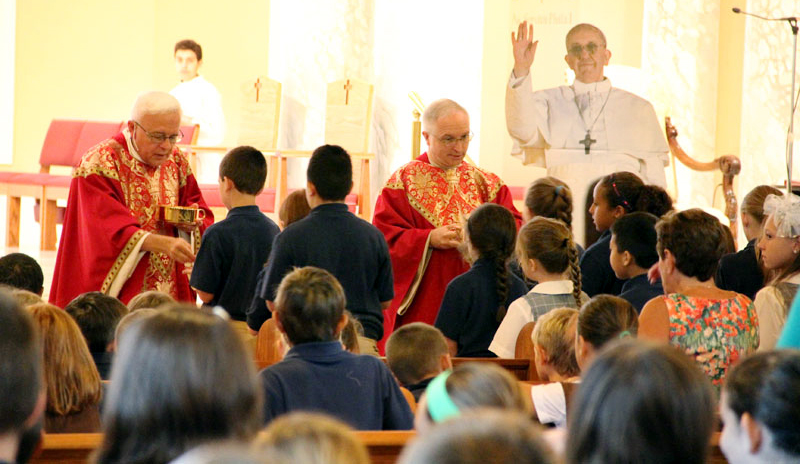 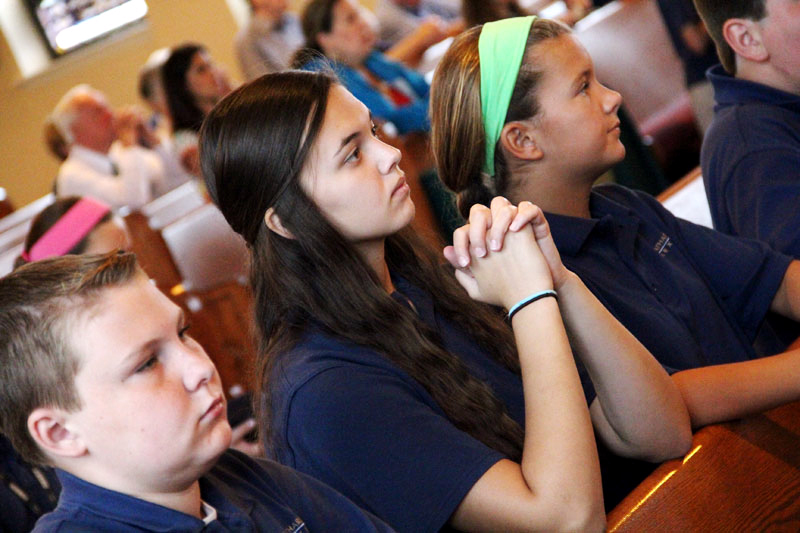 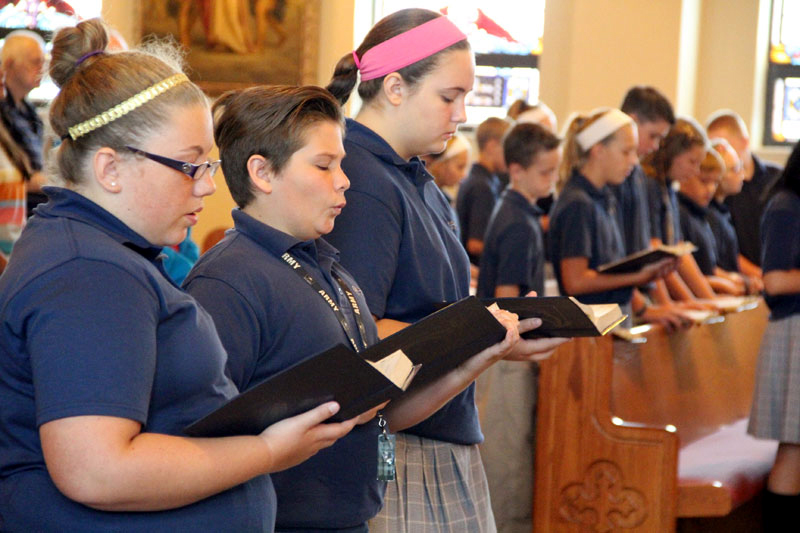 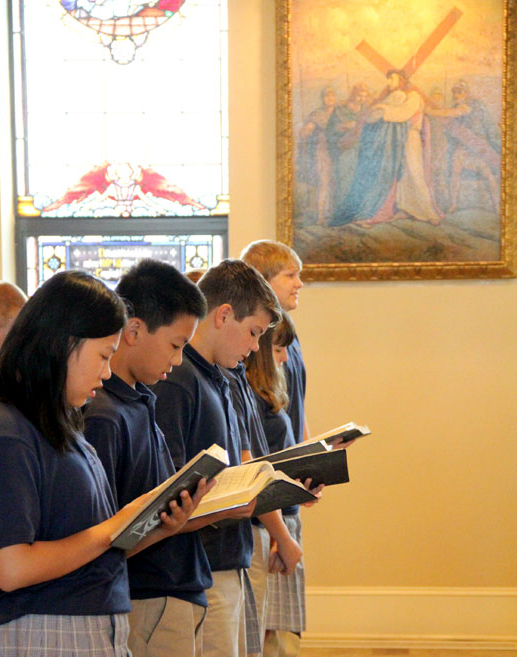 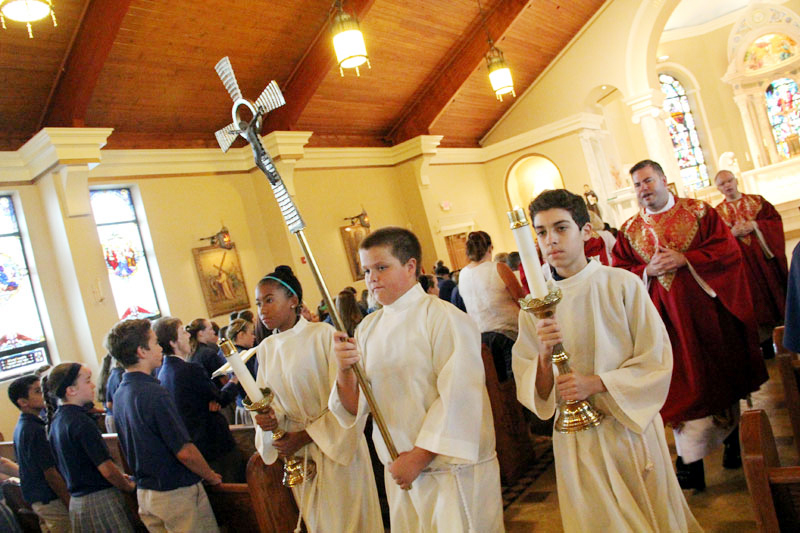 Altar servers and celebrants pr0cess out of church at then end of the Mass.

NEXT: ‘Community Table’ event feeds and challenges its attendees