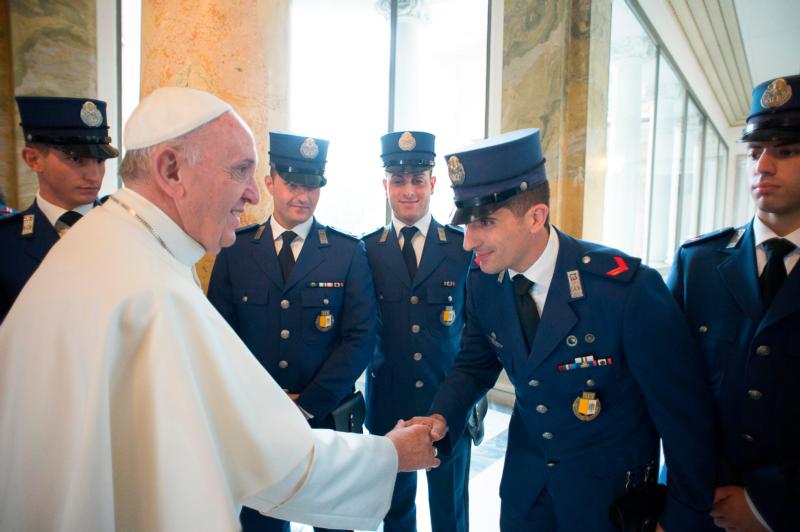 VATICAN CITY (CNS) — Every day, the devil tries to trick and seduce people with promises of riches, grandeur and power, Pope Francis said.

Satan “sows snares and is a seducer. He seduces with charm, with diabolical charm, he leads you to believe everything. He knows how to sell with this charm, he sells well, but he pays badly in the end,” the pope said in a morning homily.

Pope Francis celebrated Mass Oct. 3 for the Vatican gendarmes, the police force that works together with the Swiss Guard to protect the pope and provide order and security at papal events. The Mass was celebrated in honor of the gendarmes’ patron saint, St. Michael, the Archangel, whose feast day was Sept. 29.

In his homily, Pope Francis told the gendarmes that the future battle St. Michael is envisioned to lead against Satan is a war that is being waged everyday throughout history — in the hearts of men and women, Christians and non-Christians.

“There is a war between good and evil where we have to choose which we want: good or evil,” he said.

Unfortunately, the devil is constantly at work, trying to trick or seduce people into choosing evil, he said.

There are three steps in the strategy the devil employs to pull people along — the same three steps he used when tempting Jesus in the desert, the pope said.

By tempting a fasting Jesus to turn stones into bread, he said, the devil shows how he first tries to play on people’s desire to have and accumulate material things.

“Wealth slowly brings you toward corruption, and this corruption isn’t a fairy tale, it is everywhere,” he said. So many people sell their soul, their lives, their happiness for just “two cents.”

Once the first step is taken of acquiring money and wealth, “you feel important,” which leads to “the second step: vanity.” The devil tempted Jesus this way by telling him to make “a great show” and perform a great miracle to prove to everyone he was the Son of God, the pope said.

The third and last step is appealing to a person’s desire for power and their arrogance and pride, like when the devil told Jesus he could give him all the power in the world.

“This also happens to us, always, in little things. Being too attached to wealth, we like it when we are praised, like a peacock,” he said.

But “vanity makes you become ridiculous,” he said, and power makes people believe they are God, “and this is a great sin.”

The pope told the Vatican gendarmes they had a difficult job, where they had to face many disputes, make things right and prevent theft and crime.

He asked that they, too, be defended by St. Michael from every temptation, including from “corruption for money, for wealth, vanity and pride.”

The pope added that the only way to fight the devil is with the Word of God.

Jesus responded to each of the devil’s three attempts to tempt him by citing Scripture and “this teaches us that you cannot dialogue with the devil.”

When temptation strikes, the pope said it’s best to tell the devil, “I will not talk to you, just with the Word of the Lord.”

PREVIOUS: Christ plays in 10,000 places, and many times that, in Phila.

NEXT: Experience and rejoice in God’s mercy, pope says at Mass