Pope: God feels compassion for everyone, sent his son to heal humanity 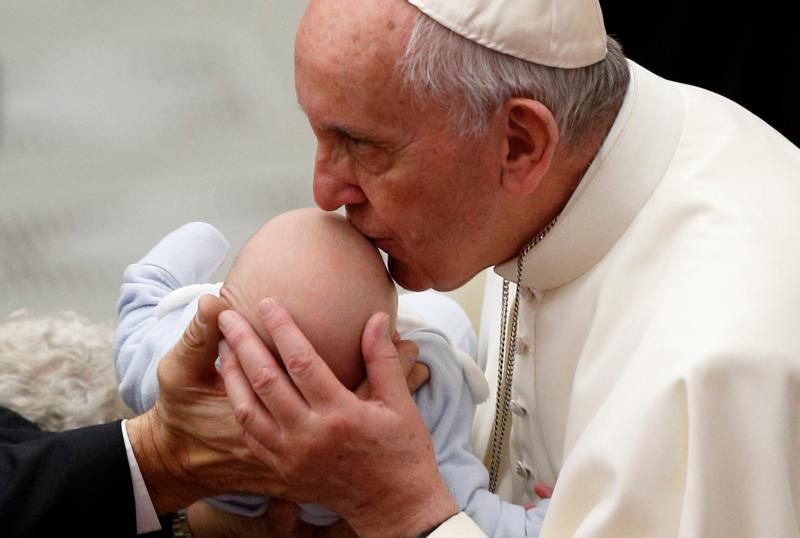 Pope Francis kisses a baby during an audience with Roma, Sinti and Irish Travelers and other itinerant communities in Paul VI hall at the Vatican Oct. 26.(CNS photo/Paul Haring)

VATICAN CITY (CNS) — God has compassion for everyone, which is why he sent his only son to heal and renew humanity, Pope Francis said in a homily.

There is a difference between compassion and pity, he said at the Mass in the chapel of his residence Oct. 30.

“I can feel pity for a dog that is dying,” he said, but compassion, especially God’s compassion, is a whole different thing. It is putting oneself in the other’s place “with the father’s heart.”

That is why God sent his only son to live and dwell among humanity — to be close to them and their problems, he said.

“Jesus healed people, but he was not a ‘shaman.’ No. He healed people as a sign, as a sign of God’s compassion, to save them, to bring the lost sheep back” to the fold, the pope said.

God puts his heart into it, into each and “every one of us. And when God forgives, he forgives like a father and not like a courthouse clerk who reads out the sentence and says: ‘Acquitted for insufficient evidence.'”

From his very own heart, God forgives because that is where he holds the person, he said.

He sent Jesus in order to bring the good news, “to free those who feel oppressed,” he said, to put himself in each person’s situation, “freeing us of our sins, of our evil and to carry us.”

“This is what a priest does,” the pope said.

Like Jesus, a priest is moved and becomes involved in the lives of the people, he said.

“How many times — and then we have to go and confess — do we criticize those priests, the ones who are not interested in what is happening in their congregation, who are not concerned?”

“No, that is not a good priest. A good priest is the one who becomes involved” in all the “human problems” out there, he said.

PREVIOUS: Marked with the sign of faith, we’re bound in life and death

NEXT: Gospel readings shouldn’t be edited at will