Saint’s relics travel to Philadelphia on ‘pilgrimage of mercy’ 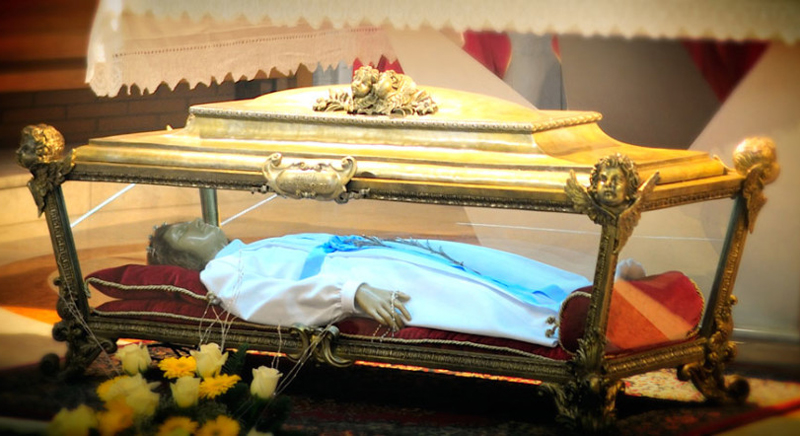 St. Maria Goretti was an 11-year-old Italian child in 1902 when she was repeatedly stabbed while defending her virginity from a 20 year-old-attacker, Alessandro Serenelli. As she lay dying the next day, she received the Eucharist and forgave him, saying, “I want to see him in heaven forever.”

Serenelli, who repented his crime while serving 27 years in prison, later entered a monastery. He was present for Maria’s canonization by Pope Pius XII in 1950, at which time she was presented to youth as a model of chastity.

In this particular tour of Philadelphia, in keeping with Pope Francis’ declaration of the upcoming Year of Mercy, she was presented as a Patroness of Mercy.

Fittingly, the first stop on the Pilgrimage of Mercy for her remains was at Sing Sing Correctional Facility in New York on Sept. 20, followed by Newark, N.J., on Sept. 21.

After Philadelphia the pilgrimage will visit cities around the country, possibly into next year while her major shrine in Netunno, Italy, is under renovation. The relics consist of virtually all of the skeletal remains of St. Maria, encased in a lifelike wax effigy within a glass-sided casket.

“It is a most wonderful thing to see a parish, a school, a prison renewed after an exposition,” said Father Carlos Martins, who is leading the pilgrimage. “This is the basis for this ministry’s existence, and I cannot wait to see where St. Maria will take it.”

At St. Maria Parish in Hatfield, Father Andrew Brownholtz credited Director of Adult Education Angela McClellan with having the tour stop at the parish. Exposition and veneration lasted the entire day and included at least 25 priests coming for the celebration of Mass.

Over the course of the day he estimates thousands of people visited the church to venerate the relics of the parish’s patron saint.

As for the papal Mass, Father Brownholtz said three busloads of people went as a group and a large number served during the World Meeting as volunteers, especially at the Youth Congress.

St. Rita’s on South Broad Street in South Philadelphia was the first to agree to host the pilgrimage. Reverencing the relics began after the noon Mass at the shrine and continued into the evening on Wednesday, Sept. 23, according to Augustinian Father Joseph Genito, the parish pastor.

Meanwhile visitation at the St. Rita Shrine picked up noticeably during the World Meeting, including a busload of visitors from Australia with an archbishop and bishop celebrating Mass.

Toward the end of that week the St. Rita Shrine was booked solid for tours, and on Sept. 27 the papal Mass was shown on a large screen in the church for those members of the congregation who could not attend in person.

Because St. John the Evangelist Church is in center city, in addition to hosting the St. Maria Goretti relics for two days, the parish was booked solid with bishops, archbishops and a cardinal celebrating Masses for their pilgrims, according to Capuchin Franciscan Father John Daya, the pastor.

In addition to those guests, on Sept. 24 a new oratorio, “The Wedding Feast of the Lamb,” was presented in the church, and the following day Gianna Emanuela Molla, the daughter of St. Gianna Molla, gave a presentation.

NEXT: Speaker at Festival of Families had link to Philadelphia saint