Speaker at Festival of Families had link to Philadelphia saint 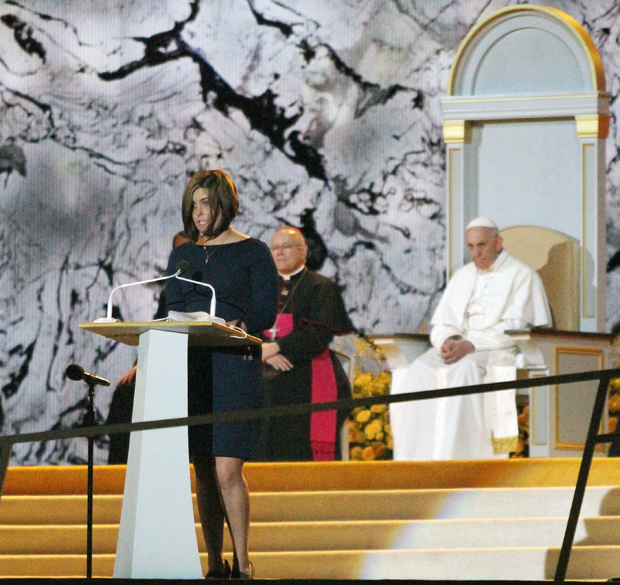 Amanda "Amy" Wall, recipient of a miracle attributed to the intercession of St. Katharine Drexel, reads a passage from the Bible at the Festival of Families Sept. 26 in Philadelphia, as Archbishop Charles Chaput and Pope Francis look on. (Photo by Sarah Webb) 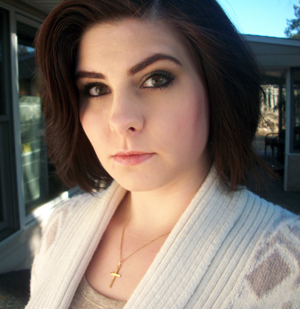 Amanda Wall wears the small gold cross that belonged to her deceased mother and which was blessed by Pope John Paul II during the 2000 canonization ceremony of St. Katharine Drexel.

As part of the Festival of Families celebration Sept. 26 on the Benjamin Franklin Parkway in Philadelphia, Amanda “Amy” Wall, a young adult from St. Bede the Venerable Parish in Holland, delivered a Bible reading from Hosea 11:1-9, which speaks of God’s unwavering love and forgiveness of Israel, despite its many transgressions.

The passage is relevant to the world, to America and to the human family today because of how we so often stray from the ways of God.

In a way, Wall is an odd choice to deliver this particular message. Her own first experience in the loving mercy of God goes back to when she was 2 years old, an innocent toddler with no personal sins in need of forgiveness.

Born with profound hearing impairment, she was completely cured through prayer to then-Blessed Katharine Drexel for intercession before the throne of God. Her cure was the authenticated miracle cited for the 2000 canonization of St. Katharine.

Wall was presented to Pope John Paul II during the canonization ceremony and she still cherishes the memory of him kissing her on the head. Now she has the memory of being in the presence of another pontiff, Pope Francis.

Wall credits the faith of her own family for the miracle. Her older brother Jack learned about miracles while studying for his first Communion, and he suggested they pray. Her sister Jeannie declared, “if Amy can’t hear I want to be deaf too.”

That scared their mother, Connie. Shortly before that the family had seen a television presentation of the life of Mother Katharine Drexel and they began to pray for her intercession. In just a short time a teacher in an early intervention program for deaf children noticed that Amy was actually hearing.

The trip to Rome for the canonization was really a highlight for the family and in a way, the lives of the three Wall children were altered forever. Drexel University, which was founded by Katharine Drexel’s uncle, Anthony Drexel, awarded all three kids full college scholarships when they came of age.

Jack and Jeannie are already graduated and Amy is looking forward to graduation and perhaps a career in the human resources field.

Their mother, who was the spiritual core of the family, did not live to see this, and Amy believes without the scholarships probably none of them would have been able to go to college.

At times Wall feels a little bit of guilt about the miracle.

“Why me?” she asks herself. “Why not other people?”

Yet in her studies she has reveled in sound, learned French and Korean and developed a love for music. She is also studying American Sign Language so perhaps she can assist others who have not received the miracle of hearing.

Hearing is a gift that Wall appreciates, recalling a quote she heard: “God gave us two ears but only one mouth. It is more important to listen than to speak.”

Before her reading at the Festival of Families, Wallsaid she expected to be a little nervous because Jack and Jeannie were not standing beside her.

“We always did things together,” she said.

But she was wearing the little cross that belonged to her mother and that had been blessed by Pope John Paul II. It was given to her by Jack when she graduated from high school.

“It’s like my mother will be there with me,” Wall said.

PREVIOUS: Saint’s relics travel to Philadelphia on ‘pilgrimage of mercy’

NEXT: Sister teaches course for inmates, students at city prison visited by pope