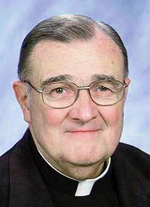 Born in Norristown, he was the son of the late James and Helen (Kauflie) O’Brien in a strong Catholic family of seven children that produced three religious vocations. He attended St. Stanislaus School in Lansdale and Lansdale Catholic High School before entering St. Charles Borromeo Seminary.

He was ordained May 22, 1965 by Archbishop John J. Krol at the Cathedral of SS. Peter and Paul.

A former pastor of St. Columba Parish in Philadelphia and Epiphany of Our Lord Parish in Plymouth Meeting, he was appointed pastor of Immaculate Conception Parish in 1995 and was named pastor emeritus in 2006.

Father John Hutter, who served his pre-deacon year with Msgr. O’Brien at Epiphany of Our Lord, remembers him as a very humble, soft-spoken man, very much like St. Francis of Assisi. He drove around in an old heap of a car until a group of parishioners chipped in and bought him a new one.

He loved his assignments as pastor, especially his first, St. Columba (now St. Martin de Porres). On the other hand, being vicar in South Philadelphia was extremely difficult for him, according to Father Hutter. Because of parish and school closings, some people could be very hurtful and he took it to heart.

He loved to decorate the church with flowers but would suffer for it because of severe allergies.

A brilliant man, he loved music and was an accomplished musician on both the organ and guitar. He would treat the parishioners by playing contemplative preludes before the weekday Masses, Father Hutter said.

When Father Frank Giuffre was ordained, his first assignment was to Immaculate Heart of Mary Parish where Msgr. O’Brien was a huge mentor to him.

“He was never haughty, very good to people,” Father Giuffre said. “He had a great sense of humor and as a young priest you make mistakes and he had a way to lighten you up, to not get the wrong kind of seriousness. He would teach you in a very loving and lighthearted way.”

“He lived a very, very simple life and he gave so much away to priests and anyone around, with the sense he didn’t need much,” he said. “He had a spirituality that was very uncomplicated.”