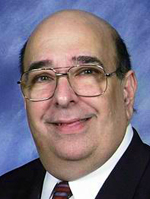 The son of the late Albert W. and Selma B. George, he was a graduate of St. John Neumann High School in Philadelphia and attended Temple University.

He was retired from Boeing Corporation where he was a photo specialist. Married for 39 years to the former Geraldine Pinto, he was the father of two: his daughter, Danielle; and son, Christian.

He entered the permanent diaconate program and was ordained June 4, 2000 by Bishop Robert P. Maginnis at the Cathedral Basilica of SS. Peter and Paul. He was assigned to ministry at his home parish, Holy Spirit, which has since merged into St. Richard.

Although he had serious health issues including diabetes for a number of years, he was nevertheless faithful to his vocation as permanent deacon.

“He assisted at the Mass and was joy-filled,” said St. Richard’s pastor, Father Michael Reilly. “He served to the best of his abilities and nothing deterred him. He was especially active with the St. Vincent de Paul Society.”

Deacon George also served as an instructor of homiletics at St. Charles Borromeo Seminary from 2003 to 2014 and was of member of De Soto Council 315, Knights of Columbus.

Father Dennis Carbonaro knew Deacon George well for many years as a personal friend long before he entered the diaconate program, first through a huge prayer group that met at Holy Spirit.

“We were kindred spirits,” he said. He remembers early in life that Deacon George had considered the priesthood and had studied for a time with the Benedictines.

After discerning that was not his vocation he became a very active layman alongside his wife, Gerry.

“People lived his preaching, and he was very compassionate, he did a lot of work with grieving families at funerals,” Father Carbonaro said.

He well remembers the solid marriage Deacon George had with Gerry. They had a saying posted on their refrigerator, “Each for the other and both for the Lord.”

During Deacon George’s final day as he was being wheeled into the operating room, Gerry was holding his hand before and they parted, said, “Each for the other.” He responded, “Both for the Lord.”

“He went into a coma, those were his last words,” Father Carbonaro said.

Deacon George’s funeral Mass was celebrated Oct. 3 by Bishop Michael J. Fitzgerald at Holy Spirit Church. Father Carbonaro was the homilist. Deacon James Stewart assisted at the Liturgy of the Word and Deacon Salvatore Bianco assisted at the altar.

In addition to his wife and children, Deacon George is survived by his brother, William George. He was predeceased by his sister, Edna Abed.

NEXT: Msgr. Bartholomew O’Brien, humble and humorous, dies at 76