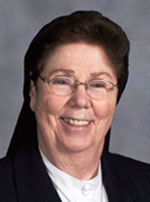 Born in Philadelphia, Sister Rose entered the Congregation of the Sisters, Servants of the Immaculate Heart of Mary in 1957 from St. Katharine of Siena Parish in Wayne and professed her vows in 1960.

Sister Rose spent most of her religious life teaching chemistry in high schools in the Archdiocese of Philadelphia and the Dioceses of Allentown and Harrisburg. While at Cardinal Dougherty High School in Philadelphia, where she taught for 20 years, Sister Rose was both director and teacher in the Medical Careers Program.

In recent years, she served in the guidance departments at Lancaster Catholic, Bishop McDevitt in Harrisburg and Villa Maria Academy High School in Malvern.

The funeral Mass was celebrated Sept. 23 at Camilla Hall in Immaculata. Father Paul Kennedy was the celebrant and homilist. The concelebrants were Fathers Neil Sullivan, Christopher Redcay, Engelbert Michel, and William Dean and Msgr. Joseph Logrip.

NEXT: Deacon Albert George of South Philadelphia dies at 66