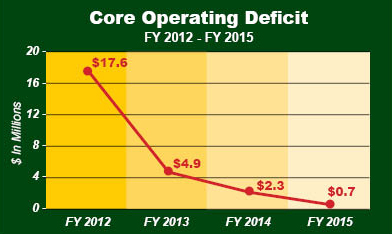 Just-released audited financial statements issued by the Archdiocese of Philadelphia’s Office for Financial Services for the fiscal year (FY) ending June 30, 2015 show continued improvement, although still not yet in the black.

“Our core operating deficit continues to improve and it’s gratifying to have more stability and predictability in our results,” said Timothy O’Shaughnessy, the archdiocese’s Chief Financial Officer. “Our 2015 result is probably better than we are realistically able to sustain.”

The deficit may increase slightly in the future, he said, due to higher seminary enrollment and increased pension costs. But O’Shaughnessy said he hoped it “won’t be worse than $1 (million) to $1.5 million.”

One reason why next year’s result may not be as encouraging as this year’s is because “the number of Philadelphia seminarians is much higher this year and we pay tuition for our seminarians.”

“That’s a terrific development obviously,” O’Shaughnessy said, “but it has an impact on our financial result that we are happy to pay for.”

The archdiocese pays the full annual cost of $34,925 (including tuition, room, board and fees) for seminarians in the Theology Division and Spirituality Year. It also pays all but $9,400 of the $32,975 annual cost for men in the College Division and Pre-Theology, the smaller figure representing the amount a seminarian may obtain in tuition assistance grants or for which his family would be responsible to pay per year.

The financial statements, audited by the accounting firm Grant Thornton, report on the Office for Financial Services, the central office managing most of the archdiocese’s finances. They do not cover financial results for the Office for Catholic Education, Catholic Health Care Services, St. Charles Borromeo Seminary, the Catholic Charities Appeal and other entities. Those audited financial statements will be released shortly.

Parishes also are not included because they are distinct entities separate from the archdiocese.

The Deposit and Loan Fund, through which parishes receive interest from deposit of funds that are in turned loaned to other parishes, was underfunded by $82 million in FY 2012. This has been reduced to $42.6 million as of June 30, 2015, and it is expected to be completely eliminated through application of funds from the Oct. 30 sale of Mary Immaculate Center in Northampton and pending sales of several other properties.

According to a supplemental narrative document released by the archdiocese along with the audited financial statements, proceeds from the sales of the properties should be “in the $35-40 million range.”

The priests’ retirement plans, which were virtually unfunded in FY 2012, now have $82 million in available assets, just $25 million short of the estimated liability. The swing is attributed mainly through funds allocated from the lease of the archdiocesan cemeteries and the sale of the archdiocesan nursing homes.

Currently every parish, ministry or archdiocesan office with an assigned archdiocesan priest is charged $11,700 per active priest for his retirement obligations. O’Shaughnessy said, “I am hopeful that we will be able to lower this (charge) slightly.”

The Risk Insurance Fund, which was underfunded by $30.4 million in FY 2012, is now fully funded.

The single most unresolved balance sheet shortfall is that of the Lay Employees Retirement Plan (LERP), which was a defined benefit plan. It was frozen in 2014 when a 403(b) defined contribution plan was established for current employees.

Although some employees near retirement opted to take a buyout from the LERP, many employees and retirees will receive future pension benefits based on earnings prior to June 30, 2014.

At the time of the recent audit, assets available for LERP benefits are approximately $477 million, which is approximately $162 million short of the estimated $639 million needed for full funding based on the current actuarial valuation. While the available funds will certainly cover pensions well into the future, the shortfall will have to be addressed ultimately.

Toward this goal, $7.5 million from the nursing homes transaction was allocated to the LERP shortly after the completion of the audit.

“We are facing our pension challenges head on and will continue to do so,” O’Shaughnessy said. “We will need to increase our funding going forward and we also need to consider using proceeds from future real estate transactions for this obligation.”

NEXT: Catholic site transforms from closed school to senior housing