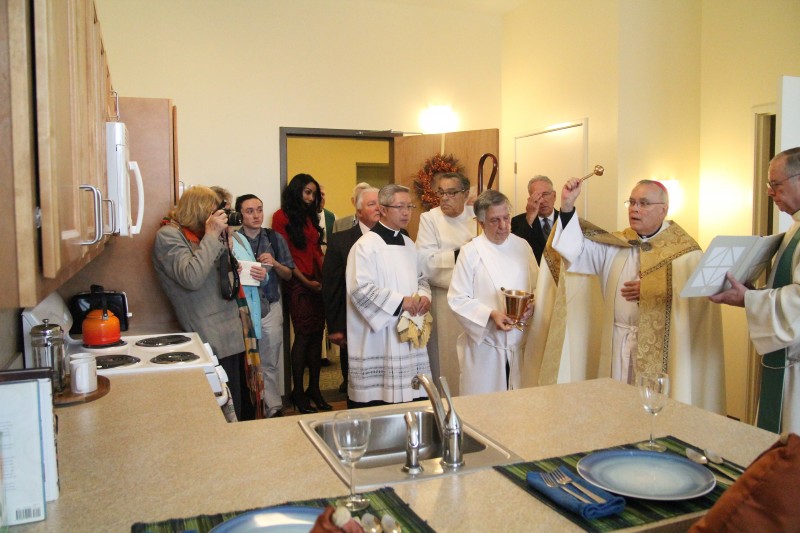 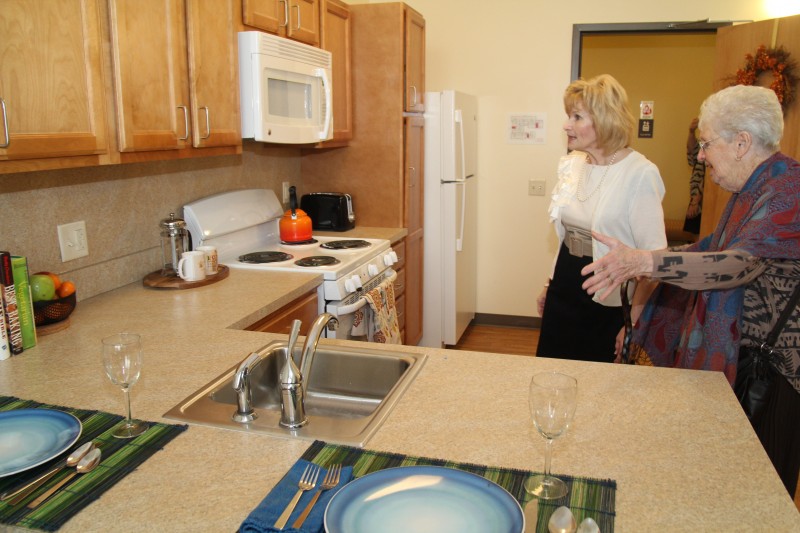 A prospective resident examines one of the efficiency apartments, rent-controlled to allow seniors to age in their neighborhood in comfort and security. (Sarah Webb)

In its heyday it educated a thousand or so elementary school kids of Nativity B.V.M. Parish in the Port Richmond area of Philadelphia. That was then, this is now.

With changing demographics, the school has been consolidated as Our Lady of Port Richmond with nearby Our Lady Help of Christians and St. Adalbert School at the St. Adalbert campus.

(See a photo gallery of the dedication festivities here.)

The entire project, which also includes community rooms, elevators and laundry facilities, cost about $12 million. It was primarily funded by the U.S. Department of Housing and Urban Development and Philadelphia’s Office for Housing and Community Development.

Residents will begin moving in shortly and no doubt will include some former students of the parish school.

“Lord, be close to us your servants who have sought your blessing of this new home today,” Archbishop Chaput prayed. “For those who reside here, we ask that You be their shelter when they are at home, their companion when they are away, and their welcome guest when they return.”

While the new facility will operate under its own separate 501c3 organization, it will report to archdiocesan Catholic Health Care Services. The project was spearheaded by the archdiocesan Office for Community Development, working with the various federal and local government agencies and officials, many of whom were present at the dedication.

“The idea of senior housing at the closed Nativity B.V.M. School was first suggested in a newspaper article by former Philadelphia Councilwoman Joan Krajewski when St. John Neumann Center opened,” according to John Wagner, deputy secretary for Catholic Health Care Services. Of course nothing happens overnight.

“It takes three things,” Wagner said, “One, identify the need; two, a community that really wants this; and three, the financing to make it happen.”

Joseph Sweeney, the archdiocesan secretary for Catholic Human Services, took special delight in the dedication because his wife attended school at Nativity and they were married in the parish.

“We have a long rich history in this area,” he said. “We are doing this for the people not because they are Catholic, but because we are Catholic. We took this building and made it a home with 63 units for people as long as they live.”

Among the most interested of those attending the dedication were a few future occupants or prospective occupants.

“I’m from K and A in Kensington,” said Lou Sponago of the lettered streets in his neighborhood. “I’ve seen one of the apartments and my wife and I are thinking about it.” Gerry, his wife, is past the thinking about it stage. “I would like to live here,” she said.

Marian McLaughlin, 84, is already signed up for one of the apartments.  She’s still working as a cook for two rectories, but “now I can retire,” she said.

Because the apartment rental fees include utilities and are subsidized at no more than 30 percent of the tenant’s income, “I can live on Social Security and still have money,” McLaughlin said, “and it is very safe.”