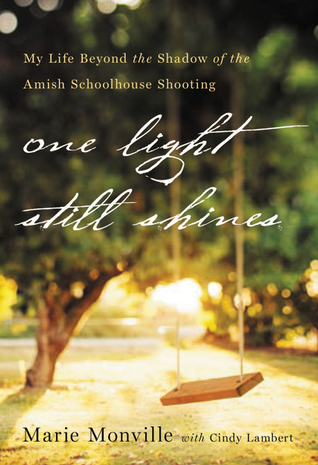 This is the cover of the book “One Light Still Shines” by Marie Monville.

Forgiveness and trust in God were the twin messages Marie Monville, author of “One Light Still Shines,” brought to St. Maria Goretti Parish in Hatfield during a Nov. 2 lecture attended by about 400 people from the parish and surrounding community.

Trusting in God sounds simple enough, but can you do it when your entire life is crashing down around you? Asking God for forgiveness for our sins is easy enough, but how good are we at granting unconditional forgiveness to those who have sinned against us?

When confronted with a terrible tragedy not of her own making, Monville relied on her deep faith in the Lord, and was eyewitness to forgiveness by victims of an unspeakable crime.

“People were amazed by her trust in God and they wished they had that same level of trust and relationship with Christ,” said Angela McClellan, director of faith formation at St. Maria Goretti, a parish named for a saint who forgave her murderer as she lay dying.

In 2006 Marie was Marie Roberts, and she and her husband Charlie lived in Georgetown, a small village in the heart of Pennsylvania Dutch country. Marie was a devout Christian raised in the United Methodist Church and the Church of God, although many of their neighbors were Amish.

Charlie was a milkman, but not in the sense city people use the term. He worked for a company founded by her grandfather, driving an 18-wheel tanker and picking up raw milk at the mostly Amish farms and delivering it to local dairies.

Not long after their 1997 wedding, Marie became pregnant, but their little girl Elise, born prematurely, lived only 20 minutes. A second pregnancy ended in a miscarriage. Marie and Charlie grieved for their lost children. Marie suggested they attend a support group for parents who lost a child; Charlie refused; “Men don’t do that,” he said. Marie’s prayers were answered and three healthy children were born to them. By 2006 Abigail was 7, Bryce was 5, and Carson was 18 months.

On the morning of Oct. 2, Marie and Charlie walked Abigail and Bryce to the bus stop for their school. Charlie kissed them goodbye and told them he loved them, and kissed his wife, told her he loved her and left, ostensibly for work, while she returned home with Carson.

Charlie never went to work. Instead, that morning he went to the Amish little one room West Nickel Mines School, and after forcing the teacher and all of the boys out, systematically shot 10 little girls, ages 6 to 13 before killing himself as police were closing in. Five children died, either at the school or in subsequent days. Of the five injured survivors two suffered permanent impairment.

In an apologetic letter he left for Marie, Charlie explained he did it out of hatred for God because of the death of their first child. She was absolutely stunned.

What was most striking was the total forgiveness by the Amish families and solicitude for the Roberts family in the immediate aftermath.

Within hours the grandfather of one of the dead children visited Charlie’s father, not to condemn, but to comfort him. Out of respect Marie did not bury Charlie until after the burials of the Amish children. On the day of his funeral all of the Amish families attended the service and when they arrived at the cemetery, a long row of Amish men stood by, deliberately blocking the view of the many news cameras, so that Marie Roberts and her children could not be photographed.

“These men whose families had been ravaged by my Charlie were concerned about me?” she wrote in her book. “The Amish could have chosen hate or blame, yet they chose love. They freely gave love in its purest form — they poured grace unimaginable and divine mercy generously into our lives.”

On that day, “at the graveside of my husband, I could not see the darkness of our loss,” Marie wrote. All I could see was the light of God surrounding my family. And it was a light so bright I felt I’d just been given a tiny glimpse of what awaits us when we stand face-to-face with God Almighty in paradise.”

Marie Roberts never suspected her husband was capable of such a terrible crime, and in the aftermath she grappled with it, turning to God for comfort.

She has since remarried to Dan Manville who already had two children and they have recently adopted a child from Africa.

In those days and months after the horrible event, “God in his bounteous grace pierced my darkest moments with his light,” she wrote. “Over and over again he broke through my pain, revealed his presence and restored my hope.”

NEXT: Hispanic families enjoy day of fun and prayer at St. Charles Seminary