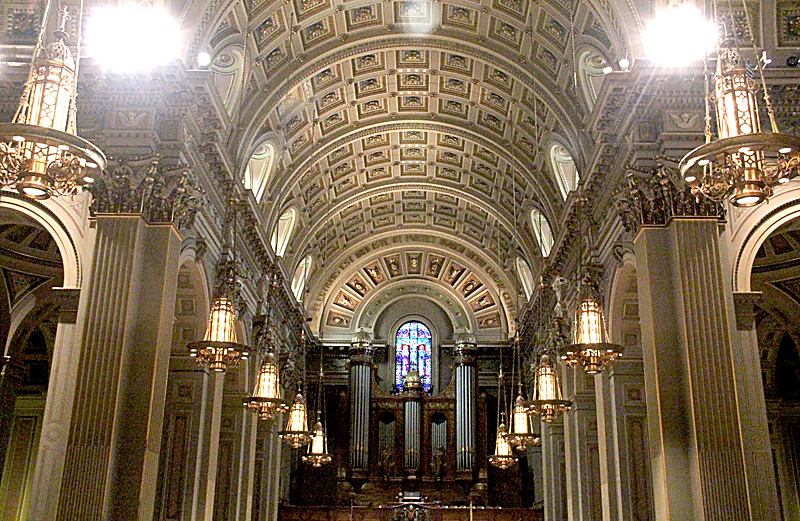 The Cathedral Basilica of SS. Peter and Paul's elaborate coffered ceiling has been credited for the unparalleled purity of its sound, showcased in the Concerts at the Cathedral series. (Photo by Sarah Webb) 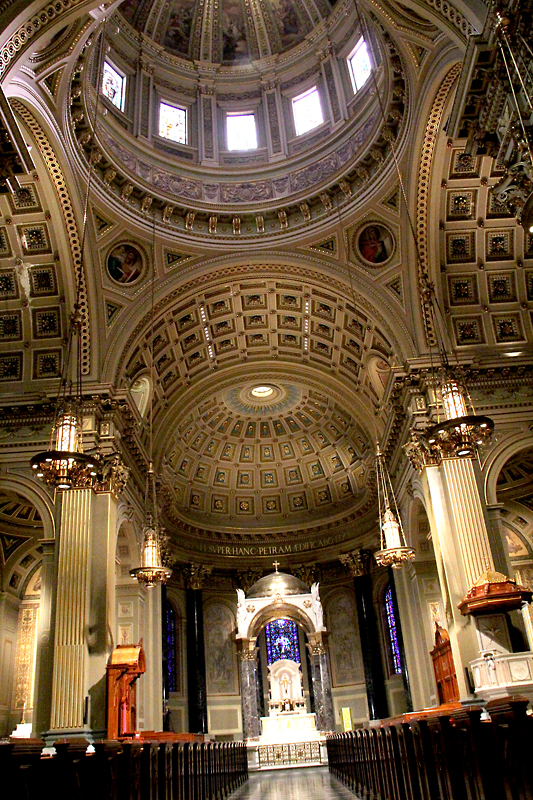 With its dome, barrel vaults and coffered ceiling, the Cathedral Basilica of SS. Peter and Paul is “an acoustical wonder” that is beautiful to the eye as well as the ear. (Sarah Webb)

If you love liturgical music that is well sung, the Cathedral Basilica of SS. Peter and Paul is the place to hear it through a series of concerts running through April.

The cathedral is of course a beautiful building to the eye, but also to the ear. “It is an acoustical wonder, a pioneer in its day,” said Michael Hogue, the executive director for Concerts at the Cathedral, who credits in part the elaborate coffered ceiling for the unparalleled purity of the sound.

He is not the first to notice it. Famed tenor Luciano Pavarotti was equally awed in 1989 when a scheduled performance at the Academy of Music had to be cancelled because of needed emergency structural repairs, and instead he headlined a concert version of Donizetti’s L’elisir d’amore at the grand old cathedral instead.

A spectacular upcoming event is this Saturday, Nov. 7, at 8 p.m. by a Philadelphia group Les Carnard Chantants presenting Spem in alim (Hope in any other), a pioneering motet written by Thomas Tallis in the late 16th century, which features eight choirs of five voices each scattered in different locations in what is considered a pre-electronics age form of surround sound.

On Nov. 21, an a capella chorus, Ancient Voices from the University of Pennsylvania led by William Parberry, will present medieval and Renaissance music, including Gregorian chant and selections from Dufay, Josquin Deprez, Gibbons, Byrd, Lassus and Ockegran.

On Dec. 4 the famed Tallis Scholars from London will usher in the Christmas season featuring Tallis’s Puer natus et nobis (A child is born to us) as well as selections from Arvo Pärt and John Sheppard.

On Dec. 18 it’s Christmas with a German twist as three local ensembles — Tempesta di Mare, Piffaro and Choral Arts — will join forces in a joyful Advent Vespers as would be celebrated in 17th-century Dresden. It features selections from Samuel Scheidt, Michael Praetorius and Henrich Schütz.

On April 10 the Williamson Voices from Westminster Choir College in Princeton, N.J., will present a program of newer works.

The following evening, April 11, the Cathedral Basilica will close out the season with a program “Washing of the Water” presented by Chanticleer from San Francisco.

Tickets for the various concerts can be ordered online through CathedralPhilaConcerts.org for the reasonable price range of $25-$40.

The program, which was begun five years ago by former Director of Liturgical Music John Romeri, has continued to flourish under Hogue. “We keep building our audience base,” he said.

In addition to the quality of the music he points to the benefits of a huge seating capacity, parking on site and walking distance to a number of good restaurants to make it an enjoyable experience.

Visit the Cathedral Concerts website for more information, and see the link to order the CD “Sound the Holy Bell,” the official recording of the music performed during the visit of Pope Francis to Philadelphia.

NEXT: Author, whose husband shot 10 Amish kids, speaks on forgiveness