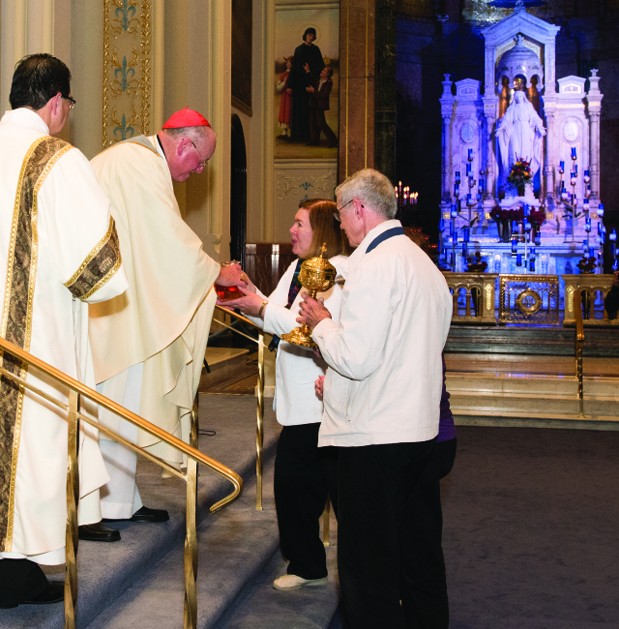 Cardinal Timothy Dolan of New York accepts the offertory gifts during Mass at the Solemn Novena at the Miraculous Medal Shrine, shown at right, which is celebrating its 100th year in Germantown. (Anne Pryce) 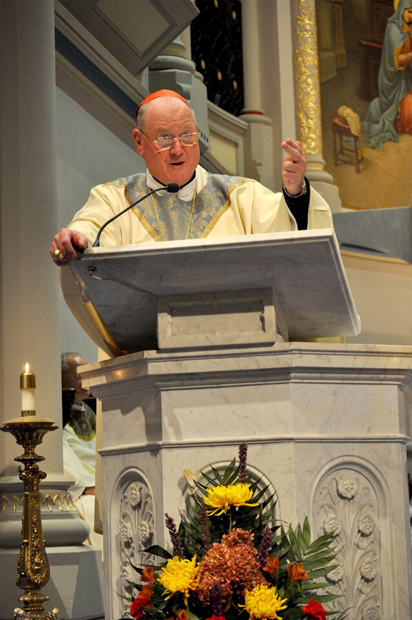 Cardinal Dolan preaches the homily at he Mass Nov. 18 at the Miraculous Medal Shrine.

Archbishop of New York Cardinal Timothy Dolan was the principal celebrant and homilist for a Mass Wednesday evening, Nov. 18 at the Shrine of the Miraculous Medal in Philadelphia.

At the conclusion of his homily Cardinal Dolan related a story he has told many times that illustrates his personal devotion to the Blessed Virgin and her Miraculous Medal. It was during his years as a St. Louis seminarian studying at the North American College in Rome. He and another St. Louis student, Father John Sheridan (now bishop of Colorado Springs), visited Paris and stopped in at 140 Rue du Bac, the Daughters of Charity convent where St. Catherine received her visions.

It was late, perhaps 8 p.m., near closing and just about the only visitors  were himself and Father Sheridan and a young Irish mother with a child of 8 or 9 who had Down’s syndrome.

On prominent display at the front of the chapel is the chair that Mary sat in during the first apparition to St. Catherine. The mother asked the sisters in the chapel if her daughter could sit in the chair and the answer was an emphatic “No.”

The sisters went about their task of putting our candles and closing the chapel for the day when the mother said to her daughter, “Go sit in the chair, the sisters aren’t looking.” The little girl went up to the chair and knelt in front of it with her head resting on it. The sisters quickly shooed her away, but Cardinal Dolan and his companion heard her mother question her, “Why didn’t you sit in the chair?”

“Mommy,” the little girl replied, “didn’t you see the beautiful woman sitting in the chair? She told me to put my head on her lap.”

In his homily Cardinal Dolan listed several other reasons for his coming to Philadelphia.

For one thing, he was a classmate of Vincentian Father Carl Pieber, the shrine’s director, in St. Louis, where both were taught by Vincentian priests during their high school and early seminary years until Cardinal Dolan continued his studies for the diocesan priesthood and Father Pieber for the Congregation of the Mission, the Vincentians.

It was during their high school freshman year that one of the Vincentian Fathers introduced them to Marian devotion.

“Fellows, make our Blessed Mother an important part of your life,” he urged the class. “She will never, ever let you down.”

“I owe her big time and whenever I’m asked to participate in her novena I won’t pass up the chance,” Cardinal Dolan said. 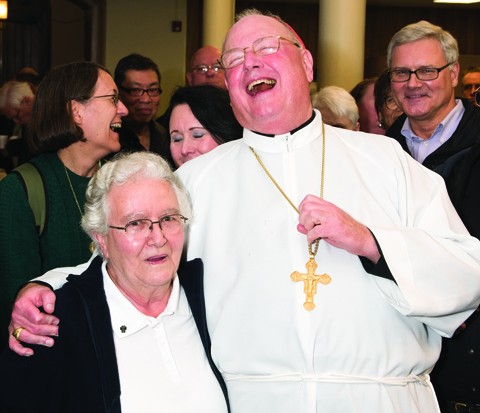 Cardinal Dolan shares a light moment with a sister of the Daughters of Charity after the Mass. (Anne Pryce)

Concelebrating along with Cardinal Dolan was Nigerian Archbishop Ignatius Ayau Kaigama; Father Pieber and other Vincentian priests including Father Michael Shea, who is conducting the novena.

For Father Shea conducting a novena reinforces his own spirituality.

“You have to verbalize what is in your heart,” he said. “You say to yourself, ‘how do I explain this’ and it becomes a more personal thing.”

The Shrine of the Miraculous Medal is in Germantown, one of the very poorest sections of the city, and something that fits perfectly with the Vincentian charism of serving the poor.

After 100 years the shrine still attracts a crowd and pews were filled to overflowing for the novena. Worshipers were both young and old, most visibly wearing the Miraculous Medal and showing their steadfast devotion to the Blessed Virgin.

Richard and Joan Teel were attending from nearby St. Helena Parish in the Olney section of the city. They have been coming to the novena for at least 20 years. “My husband’s mother used to come here,” Joan said. “I love Mary. In 2003, our son was in an accident and a coma, and I prayed and he came out of it.”

Kevin and Patty Gibson traveled about two hours from Middletown, N.J., along with their children. A great uncle of Patty had been a Vincentian stationed at the shrine. As to what favors Mary has given them, “Our four children,” Patty said.

Kristie Baker from nearby Chestnut Hill was also there with her children, and she has been making the novena for a couple years. “I pray for my kids,” she said.

More information on the Miraculous Medal Shrine can be found on the website of the Central Association of the Miraculous Medal at www.cammonline.org. The site will stream video of services of the novena every day at 9 a.m. through its close on Nov. 24, except on Monday, Nov. 23, when the video will be streamed at 9 a.m. and 12:05 p.m. The services will also be recorded for later viewing. The website also contains the complete novena schedule. 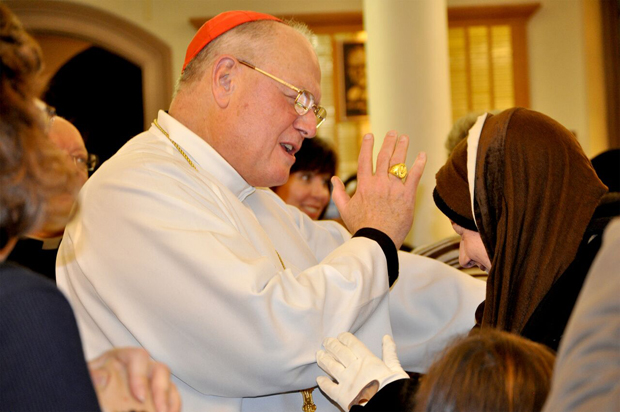 The cardinal blesses a religious sister after the Mass.

NEXT: Teens make a strong showing at annual pro-life event