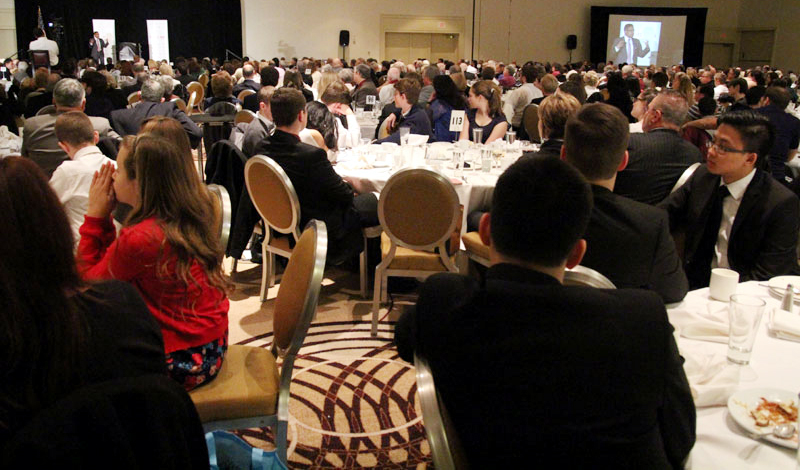 Damon Owens speaks to a packed room at the 33rd annual banquet of the Pro-Life Union of Greater Philadelphia. (Sarah Webb) 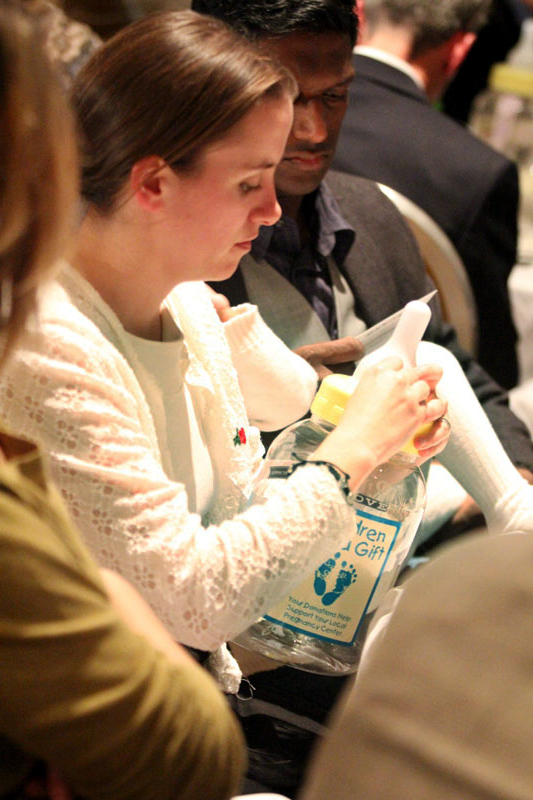 About 1,200 people attending the “Stand Up for Life” dinner did just that in support of the pro-life movement on Sunday, Nov. 22 at the Sheraton Hotel in center city Philadelphia.

Whether young, old or in between, all gathered to hear keynote speaker Damon Owens and to give public witness to the sanctity of life at the 33rd annual dinner sponsored by the Pro-Life Union of Greater Philadelphia.

Among the crowd of veteran pro-lifers were 300 high school students from across the Archdiocese of Philadelphia. Father Christopher Walsh, emcee for the evening and pastor of St. Raymond Parish in Philadelphia, acknowledged the teenagers’ presence and called them “the future of the movement.”

Joe LaPara, a parishioner of St. Pius X Parish in Broomall, agreed and said, “It is inspiring to see all generations coming together for a memorable evening.”

As a way of soliciting support for the Pro-Life Union’s advocacy work and to help women choose an alternative to abortion, oversized baby bottles were placed on each on the tables at the dinner to receive participants’ donations.

“Women need the tools to choose life and it can never be done without your support,” said Edel Finnegan, executive director of the organization.

One of the hallmarks of the annual dinner is the award ceremony, which this year recognized one Catholic working in the public policy arena and another who is a doctor.

Robert O’Hara, executive director of the Pennsylvania Catholic Conference, received the Pioneer Award for “fighting the good fight in Harrisburg,” according to the citation. He led efforts to pass the Right to Know Act in Pennsylvania, which aims to help mothers know how far along their unborn child is and to help them choose life.

O’Hara is also involved with advocacy to defund Planned Parenthood in the state, along with numerous other issues on behalf of Pennsylvania’s Catholic bishops.

Doris Fernandes, a physician from West Philadelphia, received the Be Not Afraid Award. She was fired in 2013 for refusing to issue contraceptives in her practice. With the help of Joseph Stanton, son of the late John Stanton, founder of the Pro-Life Union, Fernandes sued the city of Philadelphia for infringement of her religious beliefs and won.

“The fight has to continue until victory is won or until the end of time,” Fernandes said.

In his keynote talk Damon Owens, executive director of the Downingtown-based Theology of the Body Institute, spoke from personal experience of how God is working through him to build a culture of life and a domestic church.

“Family is where Theology of the Body and Theology of Family are interwoven as they connect to its divine origin,” Owens said.
He reflected on how after dating and finally marrying his wife Melanie in 1993 they were blessed to have six daughters. Yet they felt something was missing and experienced a “flavor of suffering,” he said.

Melanie’s seventh pregnancy ended in a miscarriage, but her husband knew God had a plan to expand the family.

He and Melanie attended a workshop at their parish and after 15 minutes into the session they knew they were called to welcome two more children into their home through adoption.

In 2009 the Owenses welcomed Olivia after her birthmother, who was considering giving up her daughter through adoption, viewed the family’s profile on an adoption agency website. A year later Damon received a call from Bethany Christian Service to care for a baby boy.

When Owens met the boy, he said, “This is my son.” He asked friends to pray for his intention and finally the boy was officially part of the Owens family.

“Family is the root of marriage,” Owens said. “The domestic church helps us to learn about being fully human and the good, bad and ugly of each person, especially ourselves, like our strengths and weaknesses. It helps cultivate a fully alive person in a culture of life.”

The key, Owens points out, is to build “a loving and caring (sense) of joy in perfection of holiness done by Jesus Christ.”

“What stood out to me about the address is how Damon was very open to his call in accepting children, even ones that are not of his own,” she said.

“His personal adoption story was so moving (and) it shows that adoption is a beautiful decision any parent can make,” Ertel said.

James Coffey, a parishioner of St. Denis Parish in Havertown, said it was “great to see so many young people committed to the sanctity of life,” a reality that “gives us great hope for the future.”

NEXT: Cursillo Movement marks 50 years in Archdiocese of Philadelphia