‘Spotlight’ on sexual abuse shows how far church has come 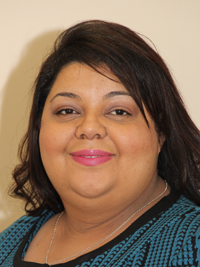 Leslie Davila, director of the Archdiocese of Philadelphia’s Office for Child and Youth Protection. (Sarah Webb)

The recent past, and what has transpired because of it, will have a bright light on it Nov. 6 when “Spotlight,” a film that chronicles the sexual abuse scandal of the last decade, hits theaters.

The movie presents the story of the investigative reporting team of the Boston Globe newspaper in 2002 that detailed the intricate cover up of prior sexual abuse of minors by clergy in the Boston Archdiocese. The scandal had been brewing since the 1990s but it was not until the Boston Globe series that the extent of the cover-up was exposed.

The newspaper won a Pulitzer Prize for the series and now the film, even before its official release, has received international awards.

At the time in many Catholic circles there was a tendency to shoot the messenger, inferring the Boston Globe was smearing the Catholic Church. That belief was true for many in Philadelphia, and anyway, so the thinking went, it couldn’t happen here. It took two Philadelphia grand jury reports (in 2005 and 2011) implicating scores of Philadelphia priests in child sexual abuse over a very long period of time, and questioning the archdiocesan response, to show how wrong we were.

That’s the past. What has been done since then?

At the heart of reforms aimed to ensure sexual abuse will never happen again is the work of the Archdiocese of Philadelphia’s Office for Child and Youth Protection and its Safe Environment Program.

Heading the office and the program is Leslie Davila, who joined the staff in 2011 but has been working with child abuse prevention and victims’ assistance and advocacy for 18 years. Prior to coming to the archdiocese she was assistant director of victim’s services with the Philadelphia District Attorney’s Office.

At this time there are about 230 safe environment coordinators in parishes and schools who are tasked with making sure all the policies for the protection of children are being monitored and implemented, according to Davila.

In addition, 35 new facilitators have been trained to join 68 already in place throughout the archdiocese. They train the people in the parishes and schools who will be working with children on how to spot signs of potential abuse and how to prevent it.

“The program is working very well,” Davila said. “We are reaching well over 6,000 people each year on how to prevent child abuse, (teaching) appropriate relationships and interaction with children and how to respond to and report the suspicion of child abuse.”

A part of the program has been ensuring that anyone working or volunteering with children has the appropriate background check prior to assuming that responsibility.

The archdiocese has been requiring this since 2002, according to Davila, but in 2014 the Pennsylvania child protection laws were amended to mandate this universally in the state. Anyone working or volunteering with children must undergo the background check including all teachers and volunteers in both public and private schools.

The process is fairly simple and can in many cases be done online through the commonwealth’s Child Welfare Portal. The cost for the background check was lowered from $10 to $8 for employees with no charge for volunteers.

Any allegations of child abuse received by the archdiocese are immediately reported to the appropriate law enforcement authorities, according to Davila.

“To some extent we are exceeding the requirements by law,” Davila said. “Hopefully the background checks will deter anyone with ill intentions or a negative criminal history from coming onto our system.”

Whether it is ferreting out suspected child abuse, reporting it or conducting background checks that can reduce the possibility of child sexual abuse, it is all pieces in a puzzle that must be assembled for an effective program.

“We are committed and we want it understood this happens in all walks of life and we want to protect the larger community,” Davila said. “This is a societal issue, not just the Catholic Church. Our aim is to protect children in our care and in the care of others.”

NEXT: How to report child abuse in Pa.