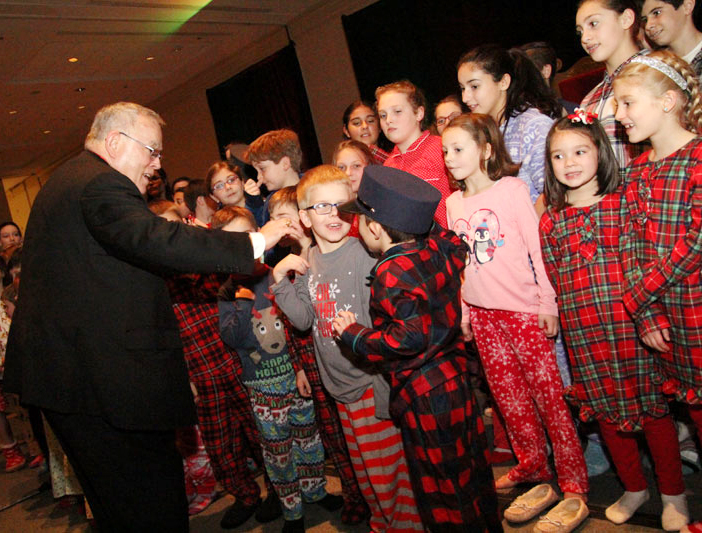 Archbishop Charles Chaput puts a conductor's cap on a member of the Catholic Community Choir, the children's group that entertained attendees of the Archbishop's Christmas Benefit for Children Dec. 17 at the Sheraton Philadelphia Center City Hotel. The theme of the event was "Polar Express." (Photo by Sarah Webb) 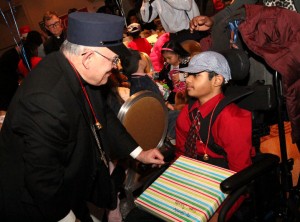 Archbishop Chaput talks with a boy attending the Archbishop’s Christmas Benefit for Children which raised $300,000 for archdiocesan outreach programs. (Photo by Sarah Webb)

It was the 59th annual Archbishop’s Christmas Benefit for Children held Dec. 17 at the Sheraton Philadelphia Center City Hotel in a tradition tracing back to Cardinal John O’Hara in the 1950’s.

(See a photo gallery of the festivities here.)

Because the theme was “Polar Express,” Archbishop Charles Chaput, who normally can be seen with a skull cap or miter, sported a train conductor’s cap.

“That’s my job as a bishop; to conduct the Church into the future, and I’m also the engineer,” he joked.

As for the benefit itself, which is also attended by donors, “it is a wonderful day,” the archbishop said. “There is a lot of enthusiasm on the part of the kids and adults here. I think the adults are more impressed than the kids. Maybe they are having a conversion to service to other people.”

Some of the donors present have a long history with the party.

Among them was Jackie Delaney, the longtime chair, who thought it was wonderful to be celebrating with so many children especially because her own are now grown.

The benefit actually raised $300,000 which will support archdiocesan outreach programs throughout the year, according to Amy Stoner, director of the Community-Based Services division of Catholic Social Services (CSS).

Some of the donors have a long history with the archdiocese. For example, Beneficial Bank, which was represented by Robert Juliano, vice president for community development, has been supporting diocesan and archdiocesan initiatives since its 1853 founding at the instigation of St. John Neumann.

Other donors have recently begun supporting the benefit. Bishop John McIntyre noted among the donors were the children from St. Denis Parish in Havertown where he did confirmation this year, and many schools throughout the archdiocese participated through fundraising and service. “It’s a wonderful thing for us to do something that is at the heart of Christianity,” Bishop McIntyre said.

Joe Sweeney, who retires at year-end as archdiocesan secretary for Catholic Human Services, said, “I would like to come back again as an observer. This is a highlight of the year; every table is filled with boys and girls who benefit from the Catholic Charities Appeal.”

What’s a party without entertainment? In this case it featured the St. Charles Borromeo Parish Choir, the All-Catholic Jazz Band and the DePaul School Spirit Dancers. It culminated with the Catholic Community Choir performing songs and scenes from the “Polar Express.”

One of the stars, of course, was Santa Claus. A perennial attraction, when he is not tied up with North Pole duties he moonlights as Pope John Paul II High School theology teacher Douglas Dunn. “Christmas is the miracle of God’s love,” he declared.

The question is, parties aside, how do the young people, those who receive and those who give, view Christmas?

Amber, a child who came with Montgomery County Catholic Social Services and received a doll from Santa, declared, “Christmas is magic.”

Andrew Rauch, a middle schooler who is a member of Catholic Community Choir, thought the party was a wonderful opportunity to see children having fun, and for him Christmas is “to be around family, enjoy the things you have and the people you love.”

Erin Rauchut, a St. Hubert High School senior filling in as one of Santa’s helpers distributing gifts, said, “I know these kids do not have all of the advantages other kids have, and it is really nice to help them out.”

For her, Christmas will mean “being with my family and giving thanks to God for all I have; going to Mass and saying, ‘Thank you, Jesus.’”

That pretty much says it all.