Pastor of St. Bridget Parish is placed on leave 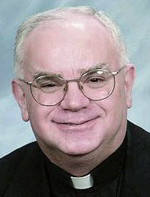 Father Steven Harris, pastor of St. Bridget Parish in Philadelphia’s East Falls section, has been placed on administrative leave because of “concerns that arose regarding his suitability for ministry,” according to a Dec. 22 statement from the Archdiocese of Philadelphia.

Spokesman Ken Gavin said there are no accusations of criminal activity involving Father Harris, but he will remain on leave while the archdiocese investigates the matter. Gavin did not disclose details, calling it a “priest personnel issue.”

The archdiocese’s “Standards of Ministerial Behavior and Boundaries” outline behavior expected of priests, deacons and lay staff and volunteers not only regarding interactions with children but with adults as well. A report of possible violations of the standards normally results in a suspension of clergy or lay persons during the period of investigation.

“There are a myriad of reasons why a priest might not be suitable for ministry that don’t involve allegations of sexual abuse of a minor, other potential criminal misconduct, or inappropriate physical contact with minors,” Gavin said. “The situation at hand does not involve any of those things.”

Father Harris has been pastor of St. Bridget’s since May 2015. He also is assigned to the archdiocesan Chancery and Metropolitan Tribunal.

The priest had been pastor of St. Isaac Jogues Parish in Wayne until he was placed on administrative leave in 2011 as part of a sweeping investigation by the archdiocese into past allegations of ministerial conduct. He was reinstated after allegations against him were determined to be unsubstantiated.

Anyone wishing to make a report of child sexual abuse may call Pennsylvania’s Child Line at 800-932-0313. For a report of a violation of the standards of ministerial behavior, contact the archdiocesan Office for Investigations at 888-930-9010. Learn more information here.

NEXT: Hearts and doors opened to Year of Mercy at Drexel Shrine