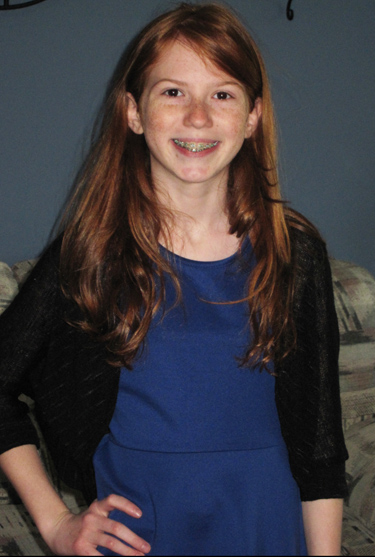 Ciara Dubeck is an eighth grader at Our Lady of Calvary School in Northeast Philadelphia.

Ciara Dubeck, an eighth grader at Our Lady of Calvary School in Northeast Philadelphia, won a $10,000 prize to develop a mobile device app for health and fitness for students. Following a national vote, Dubeck was named the national SAP Teen Innovator for her Community Wellness App, a project to help students lead healthier lives.

Dubeck will receive guidance and mentoring in the development process from technical experts at the global software provider SAP, which has headquarters in Newtown Square. The company was one of the sponsors of the Social Innovation Series, a five-city national competition presented in partnership with health and wellness nonprofit GENYOUth Foundation.

In the competition students pitch their ideas to a panel of business experts in a “Shark Tank”-style competition. Dubeck was selected from more than 200 students from 47 schools across the country.

Dubeck’s winning app encourages students to eat healthier, remain physically fit and showcase their green thumbs through a system of points and rewards. Students can track their progress via the app and receive awards throughout the year.

In addition to winning the Teen Innovator title, she also received an all-expense paid trip to Super Bowl 50 in San Francisco, where she will be recognized as the national SAP Teen Innovator in an event during Super Bowl week.