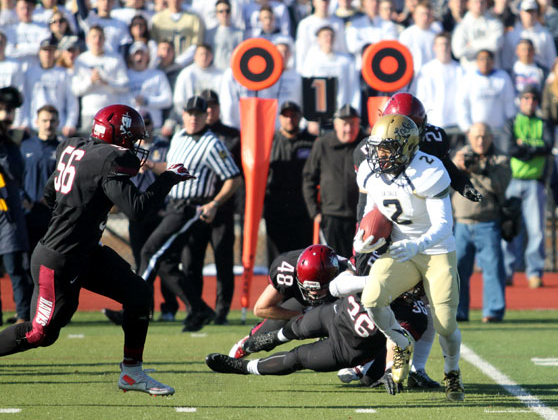 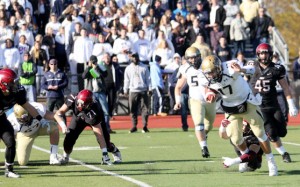 It is a play that will remain transfixed in the memories of all who saw it.

For those involved in it, even more so.

Three players from the Prep tried to make an interception, but only one person came down with the ball . . .  and he didn’t play for the Prep.

“I saw the ball coming and I reached out with my hand,” said Rinella, who tumbled backward before falling hard to the surface. “There was no way I was going to let it drop.”

In disbelief, the Prep was unable to mount a miracle comeback in the 49 seconds left on the clock, and the Explorers rushed to midfield to celebrate their 29-28 triumph, a feat that few had thought possible, largely because the Hawks had thumped La Salle, 49-24, during the regular season.

“It was definitely a different situation than we had ever been in against the Prep, that’s for sure,” Ferguson said. “The past three years we had never been in position to beat them, but in the game that mattered most, we were.”

Ferguson said he wasn’t nervous and avoided ruminating about an interception that he had thrown and was returned 95 yards by junior Richard Carr for a Prep touchdown at the first-half buzzer that gave the Hawks a 21-14 lead heading into halftime. 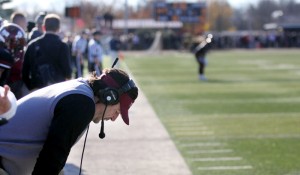 “It’s an awful feeling, but I had to forget about it and move on, and I was able to do that,” Ferguson said. “My coaches were supportive. They told me we still had 24 minutes left to make something happen.”

Trailing by 11 early in the fourth quarter, La Salle trimmed its deficit to 28-23. Then the Explorers’ defense held, and suddenly, La Salle’s fan base was imploring the Explorers to find a way to make history.

Thirteen plays and 71 yards later, they did just that.

“It really didn’t hit me that we could win the game right there,” said Ferguson, still basking in vivid reverie. “I just tried to throw a good ball and give him a chance, and he ended up making an unbelievable play. Nick deserves all the credit for that catch. He was the one who made it happen.”

The post-season is not over. After defeating Simon Gratz, 42-15, in the PIAA District 12 championship on Nov. 28, the Explorers are now involved in the PIAA Class AAAA state tournament. They take on Parkland on Saturday, Dec. 5 at 1 p.m. at Northeast High School.

Ferguson said that during the post-game handshake against the Prep, several Hawks wished him luck and asked him and his teammates to “bring home the state trophy and represent the Catholic League well.”

“They were great,” Ferguson said. “They were obviously disappointed, but they were gracious.”

La Salle, whose coach, John Steinmetz, forged himself into rare company by winning a title in his first year at the helm, has now won six of the last eight Catholic League titles and seven of the past 10.

“It was a big win for our program,” Steinmetz said. “The players have worked very hard to fix our mistakes from the first game and improve on a weekly basis. Our offense keeps growing every week and our defense has been solid, two big reasons for our success.”

According to Ferguson, the La Salle players didn’t much care about the naysayers who predicted doom after they had defeated Father Judge, 27-6, in the semifinals.

Other than Rinella’s incredible catch, La Salle’s approach was to meticulously move the ball while eating as much clock as possible.

“It was a great drive, but we had some issues to deal with – a couple of penalties, a fumbled snap,” said Ferguson. “We were trying to make plays. We weren’t actually trying to score on that particular play, but then I saw Nick in the corner of my eye, I just trusted him to find a way, and as usual, he did. It really came down to executing.”

The first day back to school waxed nostalgic. Classmates and teachers congratulated the players for an exceptional accomplishment.

“The trophy was sitting in the main office the rest of the day,” Ferguson said. “Every time I walked by it, I looked at it.

“I couldn’t help but smile.”