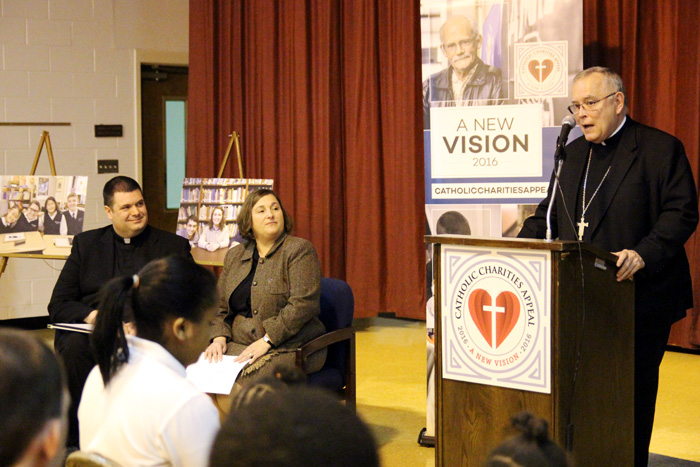 Archbishop Charles Chaput kics off the 2016 Catholic Charities Appeal Jan. 28 at St. Katherine Day School in Wynnewood. With him on the dais speaking to students and guests are Father Thomas Whittingham (left), pastor of St. Katharine Drexel Parish in Chester, and Kathleen Gould, principal of St. Katherine Day School for cognitively and developmentally challenged children. (Photo by Sarah Webb) 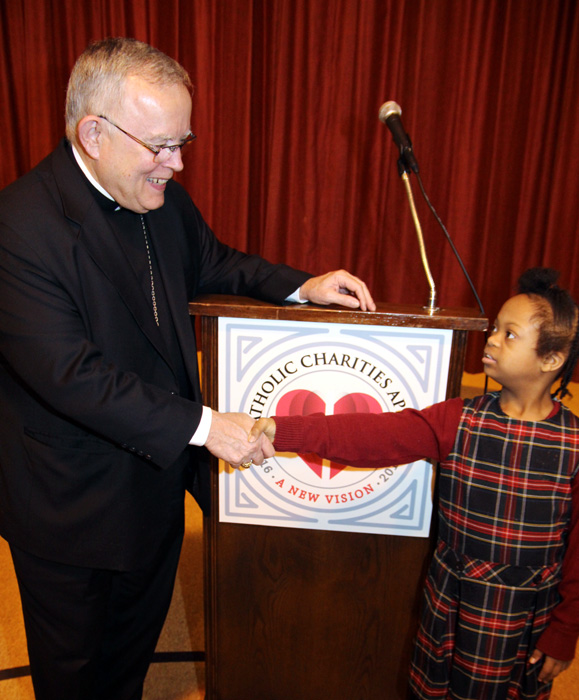 The Catholic Charities Appeal continues to be the principal fundraiser for social outreach in the Archdiocese of Philadelphia, but this year it may also help other ministries of the local church and its parishes.

Archbishop Charles Chaput kicked off the start of the 2016 annual fund drive Jan. 28 at St. Katherine Day School in Wynnewood, one of four schools of special education run by the archdiocese and a recipient of appeal funds.

The appeal’s theme this year is “A New Vision,” and the archbishop announced a new goal of $15 million for the appeal, a 50 percent increase from $10 million in recent previous years.

He explained that the first $10 million raised will continue to go toward serving the poor of the region, an activity he identified as being essential to Christian life. Any amount over that, anticipated to be an additional $5 million, will fund other ministries in the archdiocese and parishes.

That extra money from the expanded appeal would preclude a second archdiocesan collection, which Archbishop Chaput said “is very irritating to our people and our pastors.”

It is also a recognition that archdiocesan belt tightening over the past four years has put limits on the services and outreach the archdiocese is able to provide in the region, and makes the case for new donations from the Catholic faithful.

When Archbishop Chaput came to Philadelphia in 2011, the archdiocese was carrying a $17 million operating deficit. By last year that had been reduced to a $700,000 deficit, but it stubbornly remains red ink and prohibits the archdiocese from offering evangelization and other programs or growing staff and resources to church offices.

“We can’t continue to operate at (that) annual deficit for very long,” Archbishop Chaput said.

Paying for them previously relied mainly on revenues from parish assessments, but with a fraction of people today attending church on a regular basis, a fraction of the revenue must support vital ministries, all of which leads to a deficit.

The hope is that money gathered from a diocese-wide collection as part of the Catholic Charities Appeal could eliminate ongoing deficits and help grow the church’s support ministries.

The appeal altogether will serve more than 200,000 people in the region regardless of religion or background.

Nearly 180 agencies, programs and offices across five categories are beneficiaries: four schools of special education; dozens of Catholic Social Services agencies and Nutritional Development Services; needs of retired clergy and seminarians; a group of 16 “mission parishes” in need of assistance in disadvantaged areas; and support of evangelization, parish and spiritual life throughout the archdiocese.

The archbishop termed the expanded appeal an “experiment this year to see if it works.”

He said he personally is hesitant to ask people for money. But the practice of donating generously to the church is rooted in the earliest Christian community, as the Acts of the Apostles records St. Paul seeking donations from the faithful to support the good works of the nascent church.

That is why “we shouldn’t be ashamed to ask for money, or to give,” Archbishop Chaput said. “We’re hoping for a wholesome embrace of this campaign from clergy, religious and lay people.”

The Catholic Charities Appeal will become more visible in coming days, according to organizers. By next weekend (Feb. 6-7) parishes will have brochures and other materials including a video and announcements to be read from the pulpit in support of the appeal, and speakers will be available to talk to parishioners at Masses.

The greatest source of donations to the appeal comes from responses to its packet mailed to every registered household in the archdiocese, and those mailings go out this Friday, Jan. 29. Online donations can be made at the website CatholicCharitiesAppeal.org, where more information about the appeal is also available. 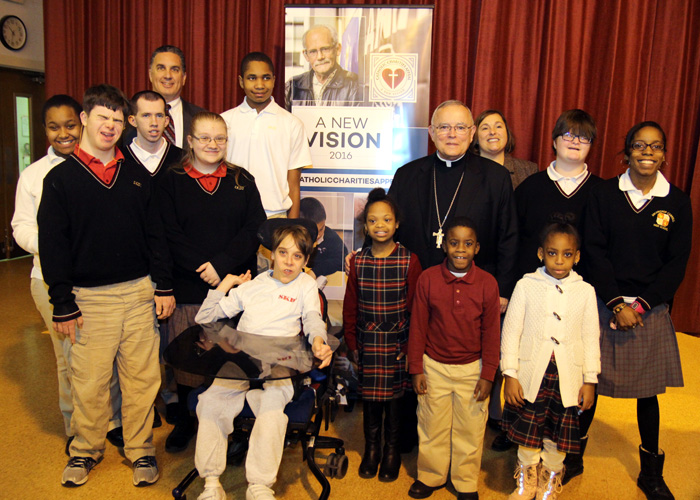