Mother’s Home helping bring babies into the world, for 25 years 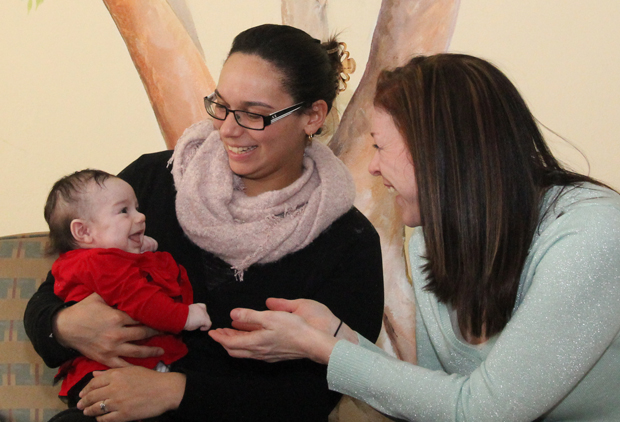 Brigid Risko (right) executive director of Mother's Home in Darby, enjoys time with baby Sabrina and her mother, Hannah Kaskey, a resident of the home for women in crisis pregnancy, located in Darby, Delaware County. (Photo by Sarah Webb)

As a huge number of Americans, including many Catholics, are preparing to descend on Washington, D.C., on Jan. 22 for an annual show of dissent of the 1973 Supreme Court Roe v. Wade decision that legalized abortion throughout the land, it might do well to recognize individuals and groups who put that conviction into action every single day of the year.

Locally, one of the most prominent such groups is Mothers’ Home, located in the former convent of Blessed Virgin Mary Parish in Darby. Over the past 25 years it has quietly provided housing and many other services to well over 1,000 young women who were experiencing an unplanned pregnancy.

Mother’s Home celebrated its 25th anniversary at Ivy Hall in the Overbrook section of Philadelphia on Jan. 3 by honoring Dr. George and Patricia Isajiw, two of the founding members and tireless supporters. Long before Mothers’ Home was established the Isajiws were actively assisting young pregnant women with financial and medical support. Over time they invited a total of 33 of women into their own home for the duration of their pregnancy and in some cases beyond.

At the recent celebration a testimony was read from Dr. Julie James-Asuzu, who as a young refugee from Africa and the married mother of two was overwhelmed with bills. She and her husband could not afford another baby at that point. Resisting pressure to abort her third child, she stumbled on the phone number of Dr. Isajiw.

“Without the slightest coercion nor persuasion, he promised to provide all my baby would need. From clothing to diapers, feeding, furniture and medical care, etc.” she wrote in a testimonial.  “All my burdens were lifted, and my fear banished.”

Her son from that pregnancy is now a biomedical engineer, and Dr. Isajiw, in her view, is “an angel of light and a beacon of hope for so many pregnant women.”

While such personal charity was and is important, in 1991 a more formal arrangement was needed to help pregnant women and girls who did not have a home support group.

When Mothers’ Home was organized, the site chosen was the large, unused Blessed Virgin Mary Convent, which they still lease. At that time there was considerable resistance from local community groups, but in the end the organization prevailed, recalls Msgr. Frank Schmidt who was the pastor at the time.

Mothers’ Home has enjoyed continued support from the parish which is now headed by Father Joseph Corley.

“Resident numbers fluctuate from women at this time,” said Helen McBlain, a founding member who is a former executive director of Mothers’ Home and currently the board chairman. The number is usually somewhere in the 20s, but in early January it stood at 17. “There is usually a drop off around Christmas time, probably because families are more willing to take their daughters back,” McBlain said.

Mothers’ Home doesn’t advertise, but most of the women who need assistance find it through friends, family or Facebook. For the majority of women this is their first pregnancy. Most come from low income areas in West Philadelphia, South Philadelphia and Delaware County.

While most of the founders and many of the supporters are Catholic, it is really interfaith in its mission, receiving financial support from churches, organizations and individuals representing a number of denominations, and a number of volunteers supplementing the full and part-time staff.

The program focuses on teaching the resident women life skills so important to raising a family of their own. There is also case management, health care, therapy if needed, and very important, assistance in obtaining housing when they are ready to go off on their own.

“We focus first of all on getting (the women) to like themselves; most come from a fractured family,” McBlain said.

Most outcomes are positive, with the women equipped to be independent and able to make good decisions for themselves and their children. Some former residents have become very successful, finishing college.

Some maintain contact long after they leave and several have become donors to Mothers’ Home themselves.

Contrary to the propaganda put out by abortion advocates, the mothers are not put out after their child is born. Some women arrive just a few weeks into their pregnancy, others in their ninth month, with a typical stay of about a year because the woman usually stays for six months after the baby is born.

“You can really see the transformation in the women while they are here,” said Brigid Risko, who has been executive director since August and is herself a mother of four young children. “Most of them are very grateful,” she said. “It’s a pretty amazing place.”
For her the great thrill is getting to help people and the babies. “They are amazing, they are so happy,” she said.