Appreciating the Mass, in any language

Jesus the shepherd leads us through our deserts to better place

A love that makes the miles melt 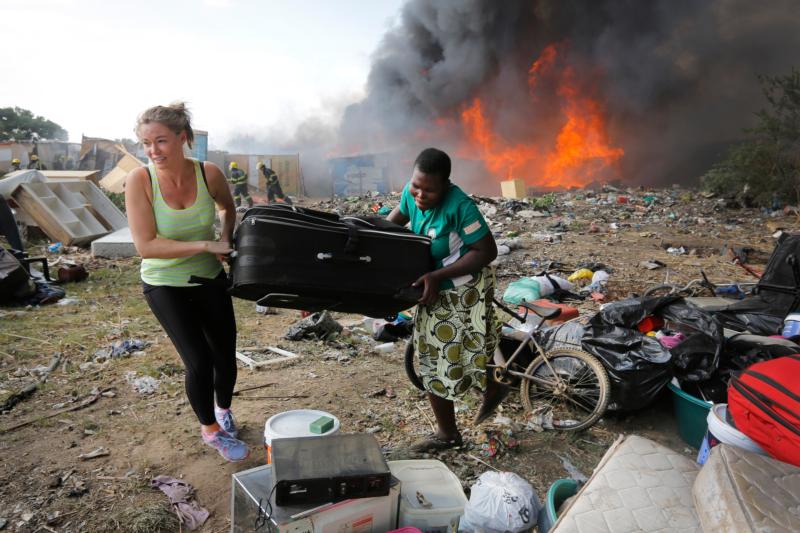 A white women helps a black women remove her belongings as a fire rages through an informal settlement in Johannesburg, South Africa, in this Nov. 11, 2015, file photo. (CNS photo/Kim Ludbrook, EPA)

VATICAN CITY (CNS) — Salvation is not found through extraordinary things or powerful people and alliances, Pope Francis said at his morning Mass. God offers it freely in response to “simple” acts of faith, like helping those in need, he said.

“In our minds, salvation must come from something big, from something grandiose,” the pope said Feb. 29 during the Mass in the chapel of the Domus Sanctae Marthae.

People think that “only the powerful are saved, those who have strength, money, power, they can be saved. (But) God’s plan is something else,” he said.

The pope’s homily looked at the day’s reading from the Second Book of Kings (5:1-15) in which the army commander, Naaman, doubted the prophet Elisha’s simple instructions that washing in the Jordan River would cure his leprosy.

Jesus also tells the story of Elisha and Naaman in the day’s Gospel reading from Luke (4:24-30), which triggers fury in his listeners — in “the doctors of the law who were seeking salvation in moral casuistry” and in many laws, the pope said, according to Vatican Radio.

The doctors of the law and “the Sadducees, who sought salvation in compromises with the powerful of the world, with the (Roman) Empire — the one group with the network of clerics, the others with political networks — they sought salvation that way,” he said.

The people had little confidence in these leaders and instead “believed in Jesus because he spoke with authority.” However many leaders were indignant “because they cannot understand that salvation only comes from little things, from the simplicity of the things of God,” the pope said.

Jesus never spoke about the path of salvation being linked to “great things” but rather, he said, to the “little things” expressed in the Beatitudes and the “Judgment of the Nations,” which refers to feeding the hungry, welcoming the stranger and the other actions mentioned in Matthew 25:31-46.

Pope Francis asked that people prepare for Easter by reading the Beatitudes and the “Judgment of the Nations” and reflecting on what things caused any discomfort or feelings of disdain in them. Contempt is “a luxury that only the vain, the proud can afford,” he said.

If something in either text stirs up any feelings of disdain, he said, then “ask for the Lord’s grace to understand that the only path of salvation is the ‘foolishness of the cross,'” Jesus emptying himself and making himself small.