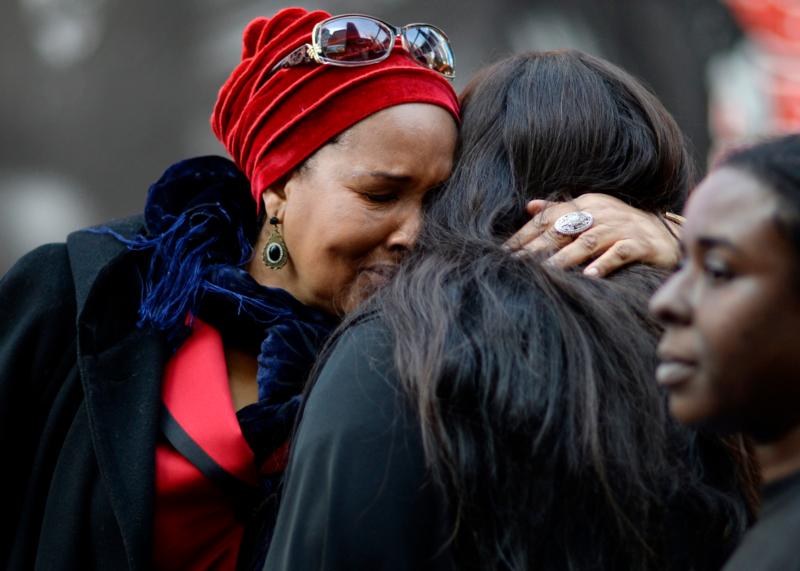 In this Oct. 22, 2015, file photo, mothers who lost their sons to police shootings hug one another during an event in New York City where names of people who died from police violence were read aloud in Times Square. (CNS photo/Justin Lane, EPA)

VATICAN CITY (CNS) — We must always forgive others who have wronged us because that is how our hearts are opened to receive God’s grace, pardon and healing, Pope Francis said at his morning Mass.

During Mass March 1 in the chapel of the Domus Sanctae Marthae, the pope reflected on Jesus telling Peter he should always forgive and using a parable about a king forgiving his servants’ debts. The Gospel reading (Mt. 18:21-35) showed how the king showed mercy to his servants and he expected his servants to be merciful and forgiving in kind to each other.

“In the Our Father, we pray, ‘Forgive us our trespasses as we forgive those who trespass against us.’ It’s an equation — they go together,” the pope said in his homily, according to Vatican Radio.

People might say, “But Father, I forgive, but I cannot forget that horrible thing done to me,” the pope said, highlighting the difficulty of letting go of the past and the need to ask for the Lord’s help.

Forgiveness is not pardoning with a caveat of “You will pay for this,” too. “No. Forgive like God forgives, forgive to the full,” he said.

When God forgives, the pope said, his pardon is so great “it’s as if he ‘forgets.’ The complete opposite of what we do with our gossip, ‘Well, this person did that and that and that.'”

“We don’t forget. Why? Because we don’t have a merciful heart,” he said.

The pope prayed that Lent would help prepare people to receive God’s forgiveness and then to do the same with others — to forgive “from your heart.”

“By forgiving, we open our heart so that God’s mercy comes in and he pardons us. Because all of us have to ask for forgiveness, all of us,” he said. “Let us forgive and we will be forgiven. We show mercy to others and we will feel that mercy of God who when he forgives, forgets.”

NEXT: Pope writes most tender answers to kids’ hardest questions