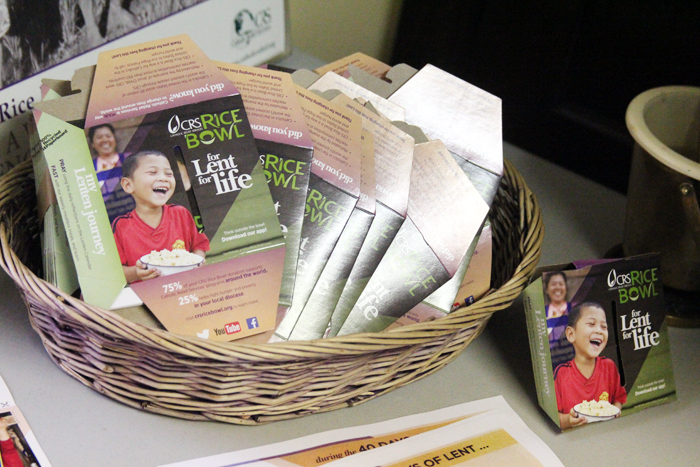 When I was a kid, two small boxes appeared in our home at roughly opposite times of the year. They were both flat, so I’d follow the instructions and place Tab A into Slot B, and so forth, until the square box about the width of a peanut butter and jelly sandwich was put together. The open slot at the top invited me and my brother and sister to place coins from our allowance inside, for charity.

The first box came along before Halloween, in support of UNICEF, the United Nations program for children around the world. The second box came out at Lent. As I remembered it, the donations we put into the box went not only to children but anyone in need, especially local people.

That box represented Rice Bowl, a program that began in the Allentown Diocese in 1975, got a stratospheric marketing boost through the International Eucharistic Congress in Philadelphia in 1976, and has been growing ever since. A couple generations later, people like me are still using the Lenten collection program now called CRS Rice Bowl.

The three-letter rebranding indicates how much this humble yet effective charity has grown over the years, because CRS stands for Catholic Relief Services. That is the overseas relief program of the U.S. Catholic bishops that supports disaster relief, anti-poverty initiatives and human development programs in countries of Latin America, Africa and Asia.

People still do drop coins in their box, but they’re just as likely to slip in a few dollar bills, or fold a check into the slot. Of course there are more efficient ways to donate these days, either by check or online payment. 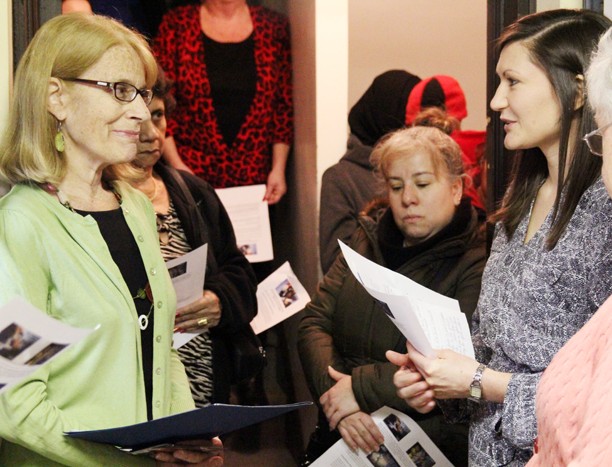 And those dollars go further than ever while also staying close to the needs near home.

I discovered this at the CRS Rice Bowl kick-off event at St. Joan of Arc Rectory in Philadelphia’s Frankford section on Thursday, Feb. 4. St. Joan’s is no longer a parish, having merged with Holy Innocents Parish. But the large rectory at St. Joan’s functions now as a neighborhood outreach center with a small food cupboard run by Sister Linda Lukiewski, S.S.J.

Unfortunately, the need for the foods that the cupboard provides increases as the end of the month nears, and families’ budgets run out. That’s where CRS Rice Bowl helps.

Donations not only help needy people around the world, they also support local outreach programs like the one at St. Joan’s. It is one of 50 such food cupboards at parishes in the Archdiocese of Philadelphia.

In fact last year the faithful of the archdiocese donated $342,379 to Rice Bowl last year and more than $91,000 stayed here in the archdiocese to aid programs like St. Joan’s, according to Cheryl Mrazik of CRS who spoke at the kick-off event.

But having the box sitting on a table at home or at work says more than “give here.” It is a reminder of Lent, and the tried-and-true three-fold practices of prayer, fasting and “alms-giving;” in other words, giving to charity.

This Lenten season, in addition to those three practices, you can add a fourth: Learn.

Mrazik recalled some moving life stories of people in Rwanda, Laos, Colombia and Honduras (watch a short video on each project) who because of CRS programs, received material assistance and training to build up their communities.

The CRS Rice Bowl program again this year offers information on those domestic and foreign families touched by the generous donations from ordinary folks in the Philadelphia region.

The hope is that we each might deepen our Lenten devotions by praying more, giving more and while we fast, to think of our brothers and sisters near and far who are also doing without, even if not by their own choice.

When I think of the people with many needs living in a wealthy society such as ours, I need to remember them as individuals, not a faceless mass for whom I can pray collectively then forget. I feel privileged to know them as persons, and together with other faithful people living simply, we can make counterweight gestures like filling that small fold-up box on their table. 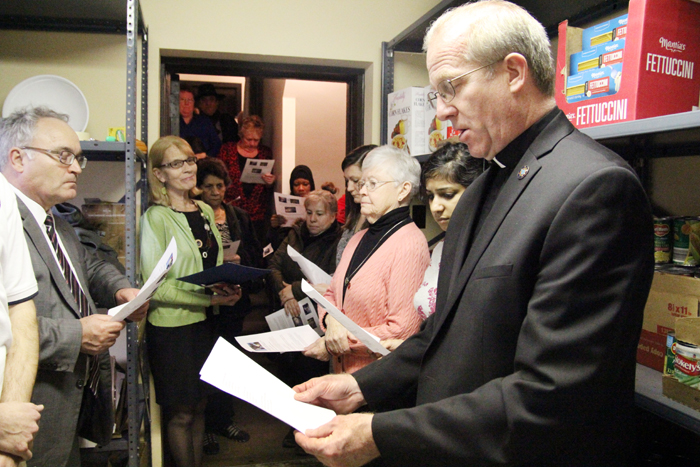 Father Thomas Higgins, pastor of Holy Innocents Parish in Philadelphia that is served by the St. Joan of Arc food cupboard, leads a prayer during the CRS Rice Bowl kick-off event at the small cupboard in the city’s Frankford section Feb. 4. (Sarah Webb)

PREVIOUS: A message from St. Valentine: Sacrifice yourself in love for others

NEXT: In the Year of Mercy, open doors of mercy are everywhere