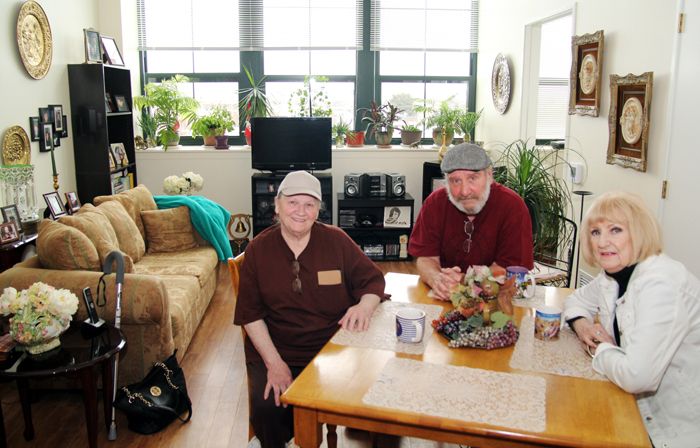 Residents of Nativity B.V.M. Place, Theresa Beckowski, Francis Hyduk and Mildred Roman, enjoy a cup of coffee in a resident's apartment, one of 63 units in the new senior housing facility of archdiocesan Catholic Health Care Services. (Photo by Sarah Webb) 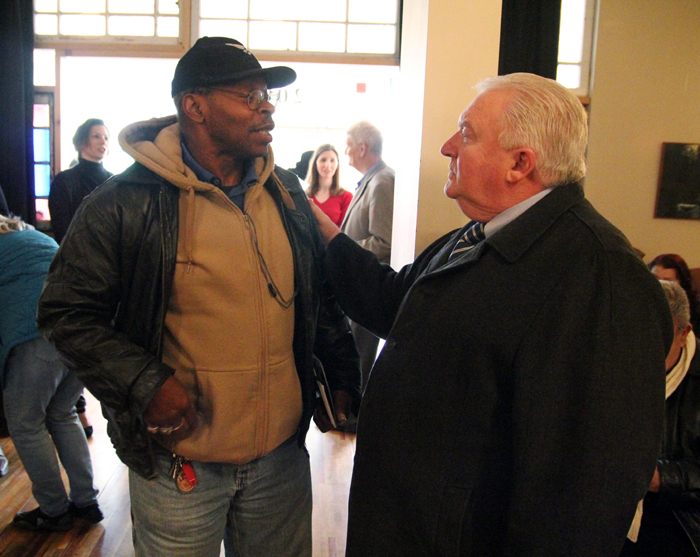 Melvin Fullwood, left, chats with John Wagner of Catholic Health Care Services as he waits for his number to be called to fill out an application for St. Francis Villa, a new senior housing community.

Judging by the number of elderly people lining up on the first day for applications at St. Francis Villa, a 40-unit affordable housing facility for low income senior citizens in Kensington, there is a crying need for such housing in that poor section of Philadelphia north of center city.

The apartments developed by the Archdiocese of Philadelphia’s Catholic Health Care Services won’t be ready until June, but applications were accepted for the first time on Monday, Feb. 8 as hopeful seniors crowded into a nearby facility appropriately named “Circle of Hope” on Frankford Avenue. They each had a story of why they are seeking an upgrade from their current home.

(See a photo gallery of potential residents signing up for St. Francis Villa, and those already enjoying their new home at Nativity B.V.M. Place, here.)

“I live in a basement and all I have is a toilet. If I want to take a shower I have to get a number to go upstairs,” said Melvin Fullwood, a minimum-wage earner who lives in a Kensington rooming house.

Fullwood, who is 63, meets the minimum age requirement of 62, and other requirements including income level and proof of citizenship or legal residency, stipulations dictated by the government agencies that provide the funding.

Hoping for an affordable upgrade

Should he obtain an apartment at St. Francis Villa it will be a palace compared to his present living conditions. They will include a full kitchen, living room, bedroom and bath, an elevator — which is a boon to seniors — on-site laundry facilities, all utilities and common areas.

The maximum gross annual income will be $34,080 from all sources. If it is a couple sharing the apartment, the maximum income is set at $38,940 and the rent in either case is based on their particular income.

Santos Leon is now living by himself in a very old house in need of upkeep, and he was applying because, “My daughter wants me to move,” he said.

Yvonne Fisher is already a resident in a senior citizen facility in the suburbs but wants to come back to the city because “my doctors are in the city and I grew up around here in Holy Name Parish.”

Interestingly enough, looking at the St. Francis Villa site and seeing all of the higher end housing construction going on nearby, it’s probably going to be a much different neighborhood than the one Fisher knew.

St. Francis Villa takes its name in part from nearby St. Francis Inn, where Franciscan Father Michael Duffy was an early advocate for such a program in the neighborhood. 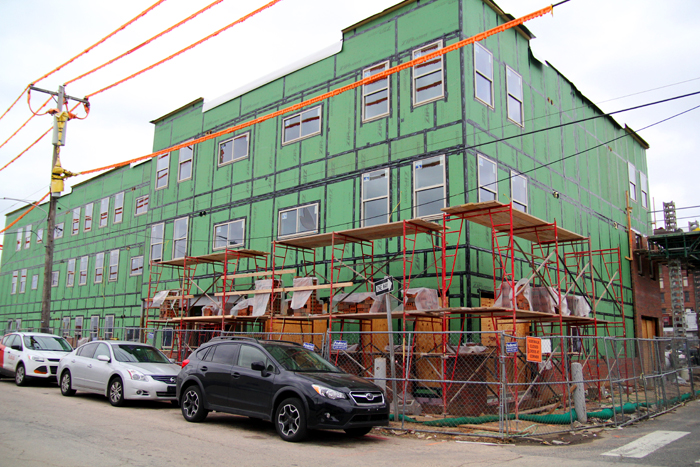 St. Francis Villa is a new-construction senior housing facility expected to be ready for residents to move into by June.

“St. Francis Inn was really involved in the genesis of the project,” said Heather Huot, who is asset manager for Catholic Health Care’s Senior Housing. “Father Duffy had this vision and he approached John Wagner with Catholic Health Care Services about it.”

(Learn more about a new Catholic outreach project also in Kensington, which has many needs, here.)

St. Francis Villa is the third such facility developed by the Philadelphia Archdiocese.

The oldest, St. John Neumann Place in South Philadelphia, has 75 apartments, and the recently opened Nativity B.V.M. Senior Housing in Port Richmond has 63 units, according to Huot. With the 40 new units at St. Francis Villa and St. John Neumann II scheduled for 2017, the total will be 230 units available for seniors.

Catholic Health Care Services plans, develops and owns the housing, obtaining the necessary funding whether it be through federal, state or local grants, tax credits or a combination of sources, and continues to generally oversee the apartment complexes.

When the new units open they will be operated in true ecumenical fashion by Presby’s Inspired Life, which was founded 60 years ago as an offshoot from the Presbyterian Church. At this point Presby’s operates 31 senior living facilities in the Philadelphia region.

Some are at market rate while others like the archdiocesan complexes are subsidized, according to Melissa Fordyce, communications director for Presby’s. At this time they have 2,169 units of senior housing of their own or managed for others, and they continue to grow, Fordyce said.

The whole idea behind the push by Catholic Health Care Services into affordable senior housing is to help elderly men and women of limited means who do not need nursing home care to age in place with dignity, often in their own neighborhood.

A visit to recently opened Nativity B.V.M. Senior Housing, which is located in the former Nativity parish school in nearby in the city’s Port Richmond neighborhood, gives a sense of how it works.

In addition to the apartments which are furnished by the residents themselves there is an onsite business manager, social worker and maintenance person as well as around-the-clock security, which residents can access if there is a medical emergency or other need.

Theresa Bechowski, 72, who was living in South Philadelphia and took an apartment at St. John Neumann after her husband’s death, heard about Nativity when it was opening and transferred because she has a son who lives two blocks away and she enjoys her granddaughter’s coming to visit.

Bechowski’s apartment, which beautifully displays her own furnishings, is neat as a pin. 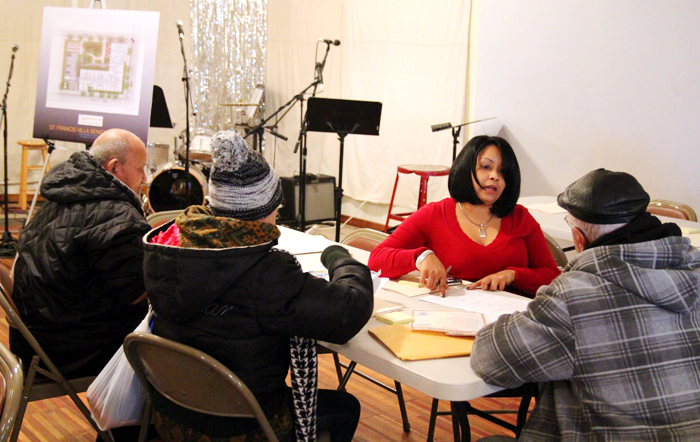 Potential residents fill out applications for St. Francis Villa, some with the help of Spanish-speaking translators.

“I like it,” she said. “I like the independence. I do my own cooking and I’m going to keep going as long as I can. I’m a people person and I don’t want to sit around in a rocking chair.”

Francis Hydub on the other hand is not the type to cook; he eats out. But Nativity is a big step up.

“I lived in the third floor walk-up and it was hard,” he said. “The place was a dump and the landlord was nasty. My kid in Boston heard about this from a friend. I moved in the first day it opened and I love it. Here everything is swell, and I always make friends.”

Mildred Roman, a former secretary, was living alone in her own house after her husband’s death, and it was really getting to be too much at 77, lugging the laundry to the basement and putting out the trash.

Moving into Nativity was a marvel for her, especially the light from the huge windows, which are a holdover from the days it was a school. “This is great for me, I’m happy here,” she said.

That’s pretty much what it is all about, according to Sara Popkin, the social worker at Nativity. “People who age in place tend to live longer,” she said.

PREVIOUS: Jump start your spiritual life with a lively revival