They bring mercy to the streets where it’s needed most 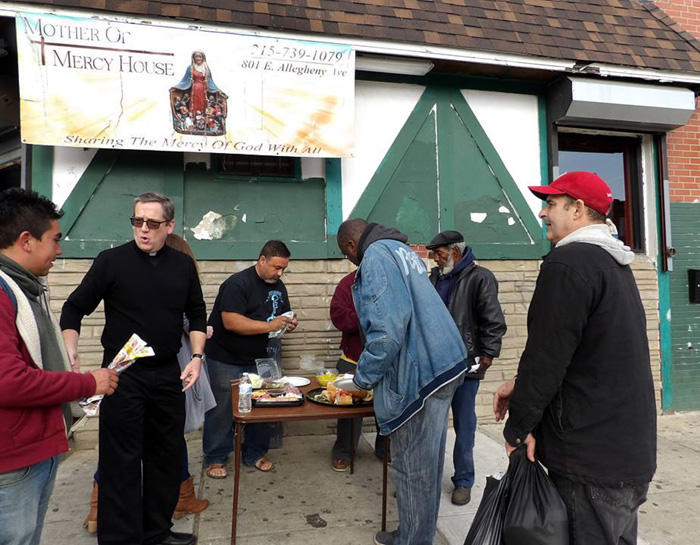 Father William Murphy speaks with residents of the Kensington neighborhood who share hoagies and snacks at Mother of Mercy House. 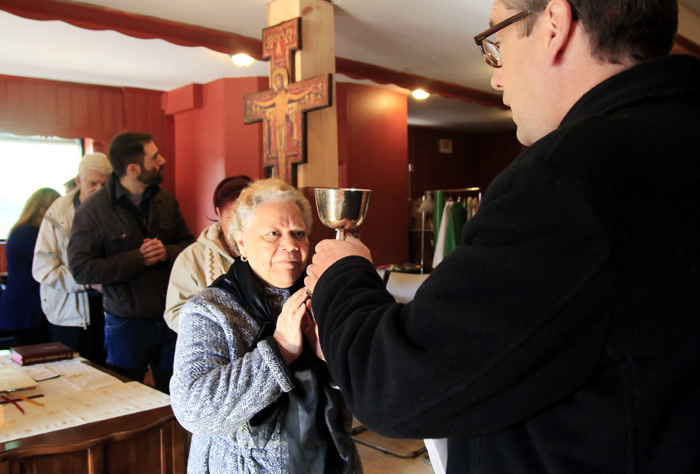 People line up to receive holy Communion during daily Mass at Mother of Mercy House, a renovated former bar in Kensington. (Sarah Webb)

“Two Irishmen and a nun entered a bar….” What’s the punchline? There isn’t one because this is no joke, but rather a new Catholic outreach effort of the Philadelphia Archdiocese that has taken firm root in a former bar in a tough section of the city.

The one-time bar at Allegheny Avenue and G Street in Kensington — within the “K&A” (Kensington and Allegheny Avenues) neighborhood — is now Mother of Mercy House which opened last July as a place of worship and social ministry. It’s a haven of hope in a neighborhood where hope has been in short supply for years, although there are slight hints of a comeback.

It all started when nearby once-huge Ascension of Our Lord Parish closed in 2012, and Archbishop Charles Chaput asked his priests for ideas on what could be done to keep a Catholic presence in Kensington, and Fathers Devlin and Murphy both independently volunteered to be missioned there.

(Watch a video on Mother of Mercy House:)

“It has met expectations,” said Father Devlin, after a small community Mass in late January. “I’m more and more convinced an obvious presence of the church is needed in the neighborhood and the people are very happy and receptive. They say, ‘Wow, the church is back.’

“They know they can come and receive help. We offer Mass and prayer to people who have not the ability to go to Mass and they can seek spiritual help from a priest.”

Although Mass is celebrated most weekdays for a small knot of people, Mother of Mercy is not a parish, and both priests have weekend ministry in suburban parishes – Father Murphy at St. Andrew in Newtown and Father Devlin at St. Anastasia in Newtown Square.

By doing this, they are not taking parishioners away from local parishes and they have the opportunity to increase awareness and involve others in their inner city spiritual and social ministry.

“We are at the heart of the neighborhood and we are working with the neighbors,” Father Murphy said. “It is very exciting.”

His former parish, Assumption in West Grove, had a coat drive that enabled him to distribute 200 coats to people in Kensington. Also, Mother of Mercy distributes donated foods to people who come often before or after Mass.

“We welcome anyone who is addicted to come to the meetings that are held right here,” Father Murphy said, adding they also work to get people with addictions into available treatment programs.

An evening prayer group has already been started, but another outreach, the offering of Masses in private homes, had to be dropped because in the psychology of the neighborhood people are unwilling to welcome others they do not know well into their homes.

Sister Ann Raymond, who knew both Father Devlin and Father Murphy well, was invited to join the team, which she did with the hearty approval of her congregation.

For her the first theme is to help the people spiritually because they have a spiritual hunger and secondly to assist them with their other needs.

As a woman, she feels she complements what Fathers Devlin and Murphy can do. 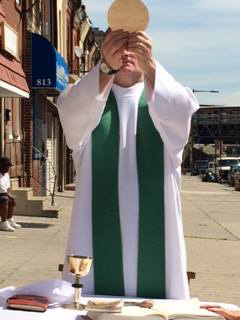 Mother of Mercy isn’t a ministry exclusively for religious, and the founders are working to involve lay Catholics in the work.

Dr. Frank McNesby, a pediatrician at St. Christopher’s Hospital who attended the Mass and is an active member of the Philadelphia Guild of the Catholic Medical Association, said the CMA is actively exploring ways to engage in some form of outreach in Kensington.

“The goal is to treat the body to get to the soul,” he said. “Our first mission is the corporal works of mercy, and we hope to engage the needy population to bring them in and then we can embrace whatever their faith needs are.”

McNesby was proud to mention a summer boot camp on Catholic bioethics the CMA runs at St. Charles Borromeo Seminary for medical students, but med student Geoff Gusoff, also attending the recent Mass at Mother of Mercy House, doesn’t need a boot camp on Catholic principles — he is already committed.

“I heard about this at the Catholic Worker House,” said Gusoff, a third-year medical student at the University of Pennsylvania. “I don’t know how, but I want to connect, to help the community, to meet the neighbors.”

Families amidst drugs and violence

Some of those neighbors are also interested in Mother of Mercy House.

George, who was relaxing on a nearby stoop, said, “They are not bad neighbors, I go to St. Francis Inn too.”

Benny, another neighbor, said, “They gave me clothes for myself and my kids too. Drugs are out of hand here and I love these people for what they teach.”

Father Devlin is in agreement that there is indeed a great deal of drugs and violence in the neighborhood, but in spite of that, “there are friendly people here with a strong sense of community. There are wonderful families who work hard, try to take care of their children and try to take care of each other.”

With the help of Mother of Mercy House and similar outreach programs in Kensington, that task is made so much easier for people faced daily with almost insurmountable challenges.

Learn more at the website of Mother of Mercy House.

NEXT: Seminary’s vocations’ focus is fun — and it’s working