ManUp Philly returns in March with mission to transform men 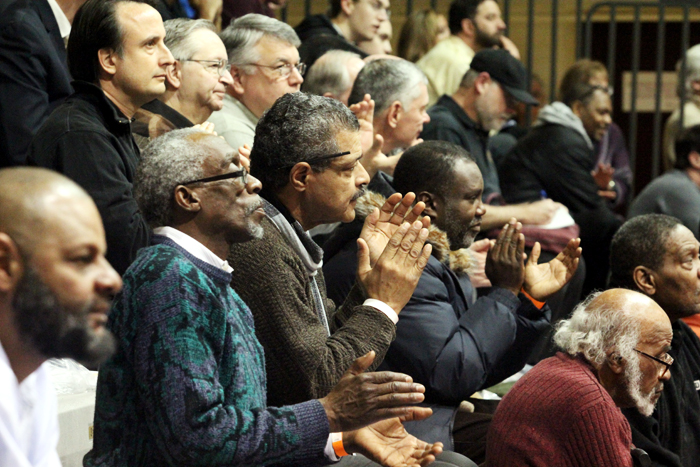 Men gather to pray and learn together at last year's Man Up Philly conference at St. Joseph's University, the same site as this year's event on Saturday, March 12. (Photo by Sarah Webb)

What does it mean to be a real man? Authentic portrayals of men are rare in today’s culture, and misrepresentations of manhood and fatherhood are prevalent in advertisements, TV shows and movies.

Fortunately, men in the Archdiocese of Philadelphia have the opportunity to hear the truth about being an authentic man and the value of living their Catholic faith. For the past eight years, thousands of men have attended the ManUp Philly conference that offers presentations by guest speakers, time for Eucharistic adoration and confession, and a closing Mass.

This year’s conference will be held Saturday, March 12 in the Hagan Arena at St. Joseph’s University. The day begins with registration at 7:30 a.m. with morning prayer following at 8:30 a.m.

Ed Klenk, president of the ManUp Philly committee, said this year’s theme, “Transforming Men, Transforming Families,” emphasizes the important role that fathers play in the faith lives of their family. “When we transform men, families too will be transformed,” Klenk added.

The conference, he noted, will help men better understand the importance of their role in the family and also provide them with encouragement to live their Catholic faith.

“I hope they will be re-energized in their faith,” Klenk said. “First and foremost I hope they go home and be a beacon of hope and strength in their families and that it would radiate out to others in their community through their children, through their spouse.”

He added that the conferences have spurred the growth of men’s faith sharing or Bible study groups in parishes across the archdiocese. Klenk estimates there are approximately 50 men’s groups that have formed in recent years, and he said members of the ManUp Philly conference committee can provide help with starting a faith sharing group or Gospel reflection group.

For one young man, the ManUp conference literally helped change the trajectory of his life. Max McGallagher, 26, was in the midst of converting to Catholicism when he attended his first conference.

“It was very formative. I heard a lot of great speakers – normal guys that I could really relate to and spoke my language,” McGallagher said. “They were living out the faith, and it was quite attractive in the sense they were real men, not phony guys you see on television but authentic men with good hearts trying to do what God wanted them to do.”

The second conference he attended happened at a pivotal time in McGallagher’s life. Although he was dating a woman at the time, he also felt that God was calling him to the priesthood. “I had felt the seeds of a vocation almost immediately from my conversion,” he said. “It was like God was speaking to me through the speakers, the guys who attended the conference, and through the priest who heard my confession.”

McGallagher eventually ended the relationship with his girlfriend and decided to attend a retreat to discern whether he was being called to the priesthood.

Following the retreat McGallagher began the process of applying to St. Charles Borromeo Seminary. He entered the seminary last fall. “Being here at St. Charles is amazing; I love it,” he said. “I’m blessed beyond belief. If you had told me when I was 18 that I would be a seminarian, I would have said you were crazy.”

McGallagher is planning to attend this year’s conference and encourages men to “come with open ears and open hearts.”

“We all have our issues, but if we come with an open heart and open ears, everything will work out,” he said. “Without the ManUp Philly conference, I wouldn’t be quite sure of who I am, let alone having a vocation.”

Klenk anticipates another successful event with more than 1,000 men in attendance. To those who have never attended the conference, he invites them to “come and be surprised at how good you’ll feel.”

He added: “Men have walked away from the conference saying, ‘This is exactly what I needed even though I didn’t realize it.’”

For more information about the ManUp Philly conference and to register, go to the website ManUpPhilly.com.

In addition to the men’s conference, an archdiocesan Catholic Women’s Conference will be held Saturday, Oct. 29 from 8:30 a.m. to 4 p.m. at the Shrine of Our Lady of Czestochowa in Doylestown. The conference theme is “Mother of Mercy, Make Our Hearts Like Yours!”

NEXT: They bring mercy to the streets where it’s needed most