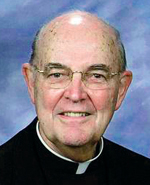 Msgr. Robert T. McManus, 89, pastor emeritus of St. Joseph Parish in Downingtown, died Feb. 17. He was also a former pastor of Our Lady of Fatima Parish, Secane, and a retired colonel in the United States Air Force.

Born in Drexel Hill, the son of the late Leo P. and Pauline R. (Staley) McManus, he attended several parochial schools including St. Andrew School in Drexel Hill, from which he graduated, and West Catholic High School for two years before entering St. Charles Borromeo Seminary.

He was ordained May 10, 1952 by Archbishop John F. O’Hara at the Cathedral of SS. Peter and Paul and his first assignment was at St. Canicus Parish, Mahanoy City. He also served as parochial vicar at Our Lady of Good Council, Southampton; St. Mary, Saint Clair; St. Helena, Center Square and St. Mary Magdalen de Pazzi, Philadelphia.

He entered the Air Force as a chaplain in 1959, at which time his seminary classmates Father (now Monsignor) James Mortimer and Father (now Bishop) Louis DeSimone accompanied him to his training post at Lackland Air Force Base, Texas.

“We were tennis partners in the seminary,” Msgr. Mortimer said, “and we were best of friends ever since. In the seminary he was considered a very pious, holy guy, a prayerful fellow. He was always soft-spoken and a gentleman. We were just compatible and always vacationed together.”

“Our class was very close,” Bishop DeSimone said. “Bob was always a soft-spoken gentleman who had time for everybody, and he was a great pastor in Downingtown, they loved him.”

After training, there were a number of assignments as he moved up the chain of command, initially to Georgia, then Canada, Washington, D.C., Japan, Massachusetts, Korea, Alabama, Illinois, Germany twice,    Mississippi, New Jersey and Hawaii.

Upon his retirement from the Air Force in 1987 he returned to the Philadelphia Archdiocese, where he was appointed briefly as a parochial vicar with Bishop DeSimone at St. Monica, South Philadelphia. This was followed by pastor of Our Lady of Fatima in 1987 and in 1991 pastor of St. Joseph Parish where he served until he was named pastor emeritus in 2001.

“I worked with him closely at the parish. He was such a gentleman and I couldn’t say anything against him, he was so gracious and kind, and an eloquent preacher,” said long-time St. Joseph parishioner Tom Keenan. “The parish came to life under him. He started new ministries, got lay people involved. He understood stewardship and was firm about things being done well.”
“Those happy 10 years were filled with the activities of a very robust group of parishioners and the opportunity to stimulate a lively and committed parish,” Msgr. McManus himself would later write.

Msgr. Gerald McManus, who is Msgr. McManus’ nephew and also recently retired as an Air Force chaplain with the rank of colonel, will preach at his funeral. He was not so much influenced by his uncle in his choice of the priesthood because the elder priest’s military career did not bring him to Philadelphia often.

“It was about the time I was ordained and he was assigned to Maguire Air Force Base, I got to see him more often,” he said. “He encouraged me to enter the military because of the shortage of chaplains.

“He was very down to earth and people oriented,” Msgr. Gerald McManus said. “He was very much for the common man. He had a great sense of humor and was very devoted to the family.”

A viewing will be held for Msgr. McManus at St. Joseph Church on Tuesday, Feb. 23 at 6 p.m. followed by a parish Mass at 7.

Msgr. McManus is also survived by his sisters-in-law, Rita McManus and Denise McManus, his brother-in-law, Jack Reynolds and many nieces and nephews.