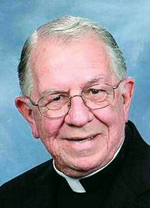 Born in Philadelphia, the son of the late Peter B. and Ellen (McCrossan) Burke, he attended St. Callistus School, Our Lady of Lourdes School, and St. Joseph’s Preparatory School before entering St. Charles Borromeo Seminary, and was ordained May 19, 1962 by Archbishop John J. Krol at the Cathedral of SS. Peter and Paul.

The priesthood was his goal from a very early age, according to his sister, Sister Mary Elizabeth Burke, R.S.M.

“I think from the time of his first Communion he went to Mass every day,” she said. “He really took being a shepherd very seriously and he was able to create community by bringing people together, and he was revered.”

After ordination his initial assignments were as parochial vicar at St.  Joseph, Ambler; Nativity of Our Lord, Warminster and St. Ambrose, Philadelphia. In 1972 he was appointed dean of men for the Theology Division at St. Charles Seminary, and although he was only there for five years, he had a profound impact on many of the young men completing their studies for the priesthood.

“He was only 10 years ordained when he came,” said Father Michael Murphy, who was a seminarian at the time. “He was very compassionate, very pastoral, extremely understanding and he had a very giving heart. He really represented what Pope Francis talks about.”

The two kept in touch over the years, vacationed together at times, and in retirement Msgr. Burke would often visit Father Murphy for dinner at St. Dorothy, Drexel Hill.

Faced with kidney failure in 2007 he retired and took up residence at St. Eugene Parish.

“He did this because it was near the hospital where he had dialysis and I could drive him,” explained Sister Mary Elizabeth, who is a nurse. He eventually received a kidney transplant but remained at St. Eugene.

“How very blessed we were to have him here,” said Sally Grande, Director of Religious Education at St. Eugene. “He was very humble, definitely a faithful servant, and very approachable and loving. He was a visible presence even though he was retired. Everyone knew him – the school children, the CCD children, the altar servers. He’ll be missed not just by the rectory staff, but the whole parish.”

His funeral Mass was scheduled to be celebrated by Archbishop Charles J. Chaput at St. Eugene Church on Tuesday, Feb. 2 at 11 a.m., preceded  by a 9 a.m. viewing. Concelebrants include Fathers Joseph Diekhaus, Joseph McDermott, Jeffrey Stecz, Thomas Sodano, Joseph Gleason, Michael Colagreco, Christopher Rodgers and Father Murphy, who will be the homilist.

In addition to his sister, Msgr. Burke is survived by his nieces Maureen Julien and Melissa Shields; nephews Peter Burke and Brenda Burke; and great-nieces and nephews.

NEXT: Retired pastor and Air Force chaplain dies at 89