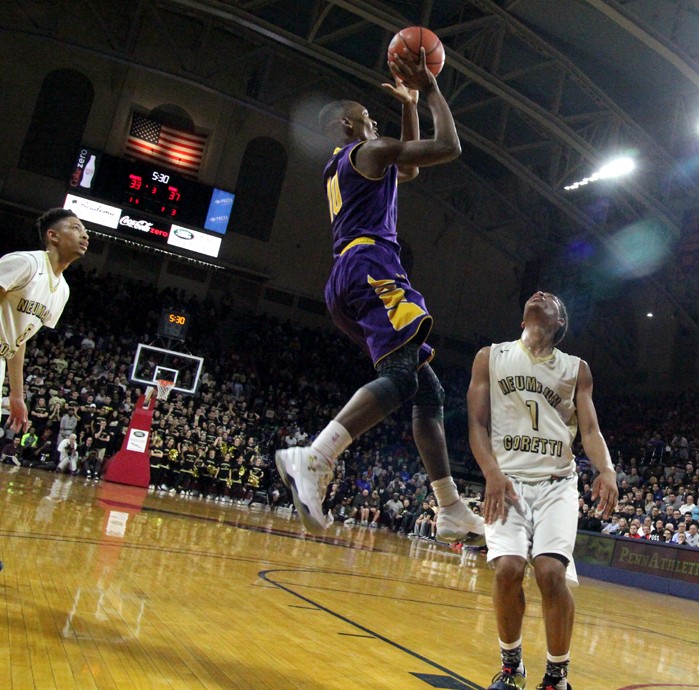 To coin a description popular with teenagers, Lamar Stevens was a beast.

There is no way of getting around it. No way of sugarcoating the obvious.

While his teammates contributed plenty, there was something about the 6-foot, 7-inch, 215-pound senior’s 22-point, 13-rebound performance that exemplified Roman Catholic’s 72-65 victory over Neumann-Goretti in the Catholic League championship Feb. 22 at an electrified, sold-out Palestra.

(See a photo gallery of the game here.)

“Definitely the biggest game of my life,” said Stevens, surrounded by friends and family who interrupted the giant with a constant barrage of picture requests. “There has been a lot of adversity, and someone had to step up, and a lot of us did.”

Delved more deeply, Stevens said he had a specific motivating factor that aided his tenacious effort.

“This was for my grandmother,” said Stevens. “She was admitted to the hospital and wasn’t able to be here. I dedicated this game to her.”

The defending champion Cahillites (21-4), who also beat Neumann-Goretti (22-3; 13-0 in the league during the regular season) in last year’s final, stunned the Saints when they sped to a 13-0 lead. Neumann-Goretti gradually crept closer, and when junior sniper Quade Green (15 points, five rebounds, four assists, three steals) drilled a long three – his only one of the night – with 1:48 remaining in the third quarter, the Saints had tied the game at 44-44.

Undaunted, Roman Catholic engineered a 14-6 run to go ahead, 58-50, late in the fourth quarter. The Cahillites would have won handily had it not been for poor free-throw shooting, as they missed nine of 15 attempts from the foul line in the fourth quarter, thus allowing Neumann-Goretti to climb back at 68-65 with 30.5 seconds left in regulation.

“All I do know is that I’m glad it didn’t cost us a championship. We fought so hard. We weren’t going to be denied. Even when they got closer, I was never concerned.”

Neumann-Goretti coach Carl Arrigale was disappointed that the Saints connected on a dismal 2 of 22 from three-point land, a far cry from a superb 20 of 31 from inside and a solid 19 of 25 from the free-throw line.

“This is one of the best three-point shooting teams we’ve ever had,” said Arrigale. “Tonight, they didn’t drop.”

Among those who struggled mightily from long distance was the usually reliable Green (1 for 9) and senior Vaughn Covington (0 for 7), though the latter tallied 16 points and hit on 8 of 9 from the foul line.

Neumann-Goretti’s inside game was manned by junior Dhamir Cosby-Roundtree. A force defensively with six blocked shots and the altering of several more just because of his presence, Cosby-Roundtree scored 14 points and snared a season-best 18 rebounds. Senior Zane Martin added 15 points.

As he did in last year’s title game, Roman senior Nazeer Bostick provided several momentum-turning baskets and defensive stands before finishing with 12 points and 11 rebounds.

“During crunch time, I pride myself in coming through in the clutch,” said Bostick. “I’m glad I was able to do that tonight. The atmosphere was fantastic. So many fans and so loud … it was great.”

Like Neumann-Goretti, the Cahillites will now focus their sights on the PIAA state tournament.

“I think we can win that, too,” said Bostick.

He isn’t the only one.

NEXT: Wood makes believers of Saints in upset title victory