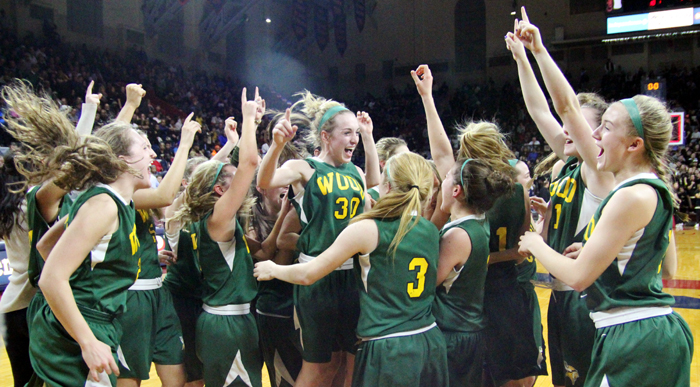 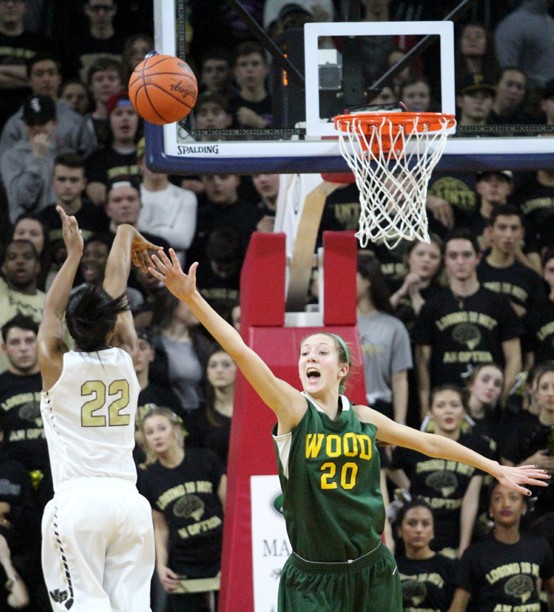 Wood sophomore Kate Connolly contests a shot in a stifling team defensive effort that held the high-scoring Saints to their lowest output of the season.

About 30 minutes had passed since the girls’ Catholic League championship had ended. A reporter who had not been present approached a colleague and asked a question.

“How much did Goretti win by?” he said.

A long, blank stare later, the reporter asked if the colleague was serious.

“Yup,” said the colleague. “I was surprised, too.”

About the only people not surprised that Archbishop Wood shocked previously unbeaten and nationally ranked Neumann-Goretti, 40-36, in the league final Feb. 22 at the Palestra were the Vikings’ players and coaches.

And when it comes to believing in a team, they are really the only people that matter.

“We played them tough during the regular season (a 45-38 loss on Dec. 15), so we were confident that we could beat them,” said senior standout Bailey Greenberg. “We knew they are a talented team but not as good as they were the past two years. We knew that if there was ever a chance we could win the championship, this was the year.”

The defending state champion Saints (23-1), who defeated Wood in the league final the past two years and whose overall winning streak of 53 was snapped, scored in single digits in each of the first three quarters. 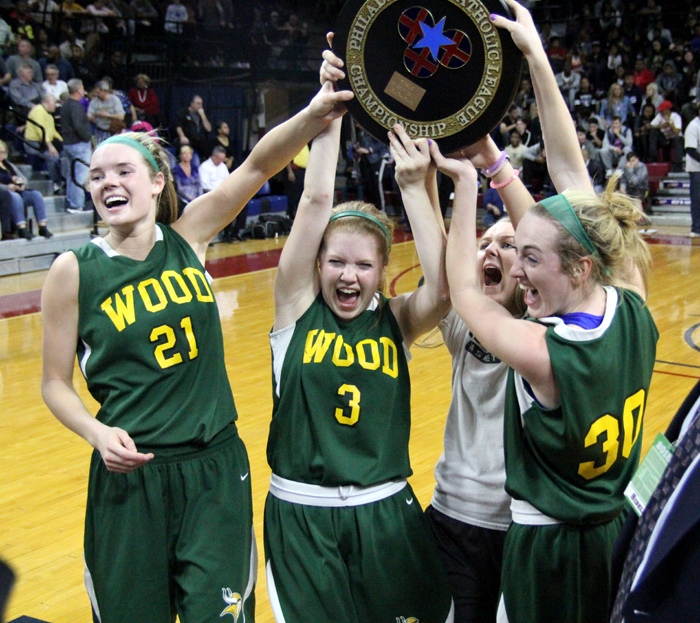 The Vikings (19-6), who won their 15th consecutive game after a 4-6 start against a powerhouse schedule, raced to a 5-0 lead and an 11-6 advantage after the first eight minutes. They increased their lead to 27-20 after three, then held off a desperate Saints team that outscored Wood by 16-13 in the final stanza.

Leading by five with 11 seconds remaining, Greenberg stood on the foul line with a chance to clinch the win. By making both freebies, she did just that, giving Wood an insurmountable seven-point lead.

“I never get ahead of myself,” said Greenberg, “but when we were up by three possessions, I couldn’t help but smile. I knew we were definitely going to win.”

Wood sophomore Katie May, who in the regular-season loss to Goretti had scored 19 points, understands why many people emerged stunned by her team’s triumph.

“Some may find this surprising, but my team and I were very confident going into the game,” said May. “We were definitely the underdogs on paper and in most people’s minds, but we did not feel that way. They are a very good team but we knew we had a really good chance at beating them.”

May said the “main difference” was that the Vikings “played together.”

“We knew we would have to beat them as a team and did just that,” said May. “We were smart time management-wise and just overall taking care of the ball. Bailey took over, which obviously always helps.”

The sound of the final buzzer will forever be transfixed in May’s memory bank.

“Right when it went off, all that was in my mind was pure joy,” she said. “I was so excited for myself, the team and coaches, but especially Bailey and Claire (Bassetti), our two seniors. They deserved this win more than anything. They were the best leaders throughout the year and it was a perfect way to exemplify that.”

Late in the contest, Goretti came close to tying or going ahead, But a jumper by sophomore Kate Connolly, which May voted as the key play of the game, quelled the Saints’ momentum.

“We knew it would be very difficult to beat Neumann-Goretti,” said Connolly. “They are a great team and we knew it would take our best effort to beat them. We feel like we are a much better team than we were two months ago and we’re really gelling.

“We really wanted to win this game for each other, especially for the seniors. There was never really a point where we were sure it was going to be a win; we knew that Goretti was capable of coming back at any time so we couldn’t really relax. When the buzzer sounded we knew we finally did it. It was a great feeling, winning the Catholic League championship, especially against a great team like Neumann-Goretti. I’m sure it’s something we’ll remember for the rest of our lives.”

Both squads will participate in the PIAA postseason. Last year, the Saints seized the state crown while Wood lost in the state final. It is far from inconceivable that both teams could run the table and bring home a state championship to their respective schools.

In neither case will anyone likely be remotely surprised.

NEXT: GMA’s defense shows no mercy in capturing league crown