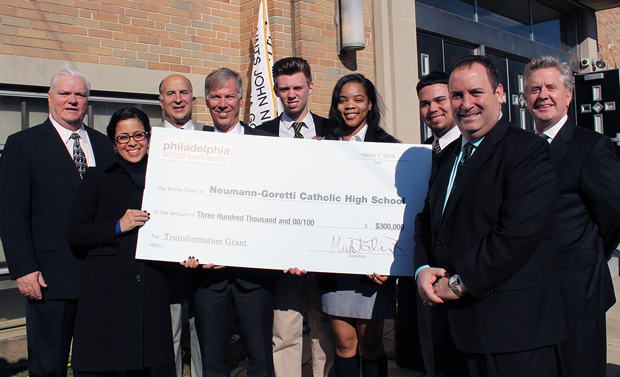 Proudly displaying the award of $300,000 SS. John Neumann and Maria Goretti High School from the Philadelphia School Partnership are students, school officials, PSP representatives, civic leaders and officials of the Philadelphia Archdiocese March 1 at the school in South Philadelphia.

SS. John Neumann and Maria Goretti High School has received a $300,000 grant from the Philadelphia School Partnership (PSP) to improve education at the archdiocesan school in South Philadelphia.

Termed a “turnaround grant” in a news release announcing the award March 1, the money will go toward implementing a “comprehensive transformation strategy” that was developed thanks to a $150,000 grant from PSP last year.

The new grant money will be used for a three-pronged strategy of increasing students’ performance through the use of academic data, helping teachers provide better instruction in the classroom through mentoring, and raising the overall expectations of achievement at the school.

Neumann-Goretti currently enrolls 450 students, according to its website, and 90 percent are Catholic. Slightly less than half are minority and low-income students, and lower academic performance among them is prompting the turnaround effort at the school. After generations of operating as two separate Catholic high schools for boys and girls in South Philadelphia, the two merged into one co-ed school in 2004.

To raise those grades and close the “achievement gap,” the school has adopted the Common Core State Standards. They emphasize strengthening students’ writing, problem solving and creative thinking skills, which are required by college placement tests such as the SAT.

The school has also eliminated the traditional Catholic high school “tracking” system that places students in groups according to their academic performance.

School President Bruce Robinson explained to CatholicPhilly.com that previously, if a student began to struggle academically or entered the school at a low level, he or she could be dropped to track three or four, resulting in a “watered-down education.”

“If things get hard, we’ll make it easier,” was the approach, and because the student’s grades improved, he and his family were pleased. But doing so does not prepare the student for college.

“Everybody is getting a college prep curriculum today,” Robinson said of the change of culture at Neumann-Goretti. “They have aspirations of something better.”

By doing away with tracking, all students have broader access to advanced placement and honors courses, and other college preparatory programs.

Even if a student does not want to attend college right after high school graduation, he or she will have a good education, Robinson added.

And if a new student enters Neumann-Goretti with lower achievement, he or she is not simply put in a lower track. “We identify the gaps and use the data to make progress” for the student, Robinson said.

As part of the turnaround strategy, teachers also are getting more help. Administrators regularly observe each teacher then meet with him or her to offer feedback to improve classroom instruction, Robinson explained, all of which helps to better engage students with their teachers.

He sees the changes at his school as a pilot program whose results he is sharing with the archdiocese’s Office of Catholic Education for the benefit of all the 17 archdiocesan high schools.

Chris Mominey, archdiocesan secretary for Catholic education and chief operating officer for Faith in the Future Foundation, which operates the archdiocesan high schools, said the focus on urban schools like Neumann-Goretti “is a key component of our overall strategy for growth, innovation and change.”

He hoped that the grant by PSP to Neumann-Goretti, one of eight archdiocesan high schools in Philadelphia, “will be the first step of many as we seek to strengthen all sectors of education in the City of Philadelphia. Catholic schools, K-12, stand at the ready to serve those students who seek our rigorous academic programs coupled with Gospel values, especially here in our most vulnerable neighborhoods.”

The nonprofit PSP is raising $100 million in private funds to provide grants for the transformation, growth and startup of high-performing public and private schools in Philadelphia, according to the news release.

In the last five years PSP has invested more than $53 million in Philadelphia schools to help some 20,000 students gain access to a high-quality education. These grants include approximately $34 million to public charter schools, $14 million to district schools and $5 million to private schools.

More than a third of all investments, the organization said, have been turnaround grants to help schools improve academic outcomes for all students, especially low-income and minority children.

“The Neumann-Goretti leadership team has a bold vision for transforming the school to ensure all students, regardless of race or income, are prepared for success in college or careers, and we are excited to help bring that vision to life,” said Jessica Pena, director of PSP’s Great Schools Fund.

“As the student body has become more diverse, the school is working harder to meet the needs of every student. This is an investment in the team’s plan to improve instruction and rigor to give every student the opportunity to excel academically.”

NEXT: More local Catholic churches join 24 Hours for the Lord this weekend