Catholic young adults feed the homeless, and listen to them 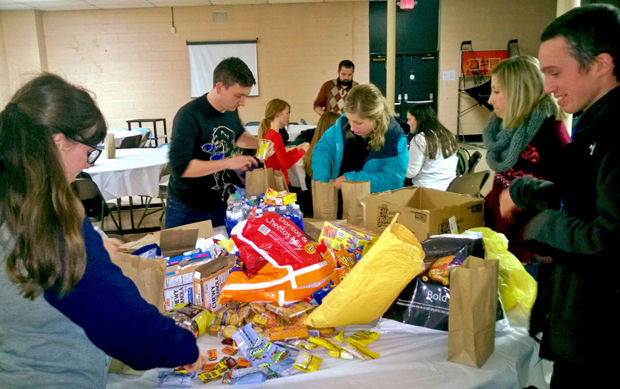 Young adults prepare bags of personal items and religious articles Feb. 19 for the "Jesus Run," a monthly outreach to the homeless in center city Philadelphia. 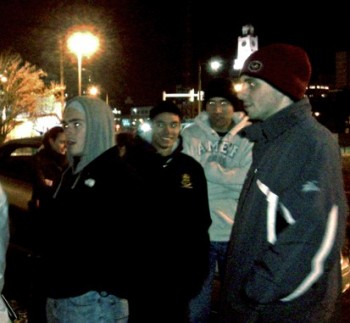 Members of the Jesus Run prepare to fan out in center city Philadelphia.

Inspired by the call from Pope Francis to live out the year of mercy, Dawid Ogar, a parishioner of St. Gabriel Parish in Philadelphia, wanted to help the homeless in Philadelphia by exercising the corporal works of mercy to the marginalized in the city.

Along with other like-minded friends and groups, he organized “Jesus Run,” which is a monthly outreach in the center city Philadelphia area that gives food, drink, bibles, rosaries and clothes to the homeless.

The idea for the outreach, he explained, is “for people to come together and have a deeper encounter with Christ in the poor.” Ogar also felt that it was the perfect way to answer the pope’s call for the Catholic Church to be a poor church, for the poor.

When Ogar moved to the Philadelphia suburbs in Essington in the fall, he brought Jesus Run along with him and inaugurated the first event last November, which became a success.

A group of 30 young adults joined him on Friday, Feb. 19 to give out new clothes to help keep homeless men warm. They gave out more than 100 cups of hot chocolate and peanut butter and jelly sandwiches prepared by various homeschooled groups and young adults. They also had personal hygiene products, rosaries and bibles to give out.

What motivated Ogar was his own personal experience while living in the Bronx, New York, where he had an epiphany and knew that he had to help the less fortunate.

“For the past two years I lived and did mission worked with the Franciscan Friars of the Renewal,” Ogar recalled. Through his time at St Anthony’s Shelter in the Bronx, he found fellow men who “wanted to dedicate a year or two of their life serving the poor and the homeless.”

Through the ministry and its life-changing experience, he knew he had to share that love with other young adults when he came to Philadelphia.

In helping the poor living on the streets of the Bronx, Ogar said he “felt fulfillment, and I experienced true joy and happiness.”

Considering Pope Francis, his patron St. Francis and soon-to-be-saint Mother Teresa of Calcutta, Ogar said they all “had such a love for the poor.” They, like many of his peers, “want to be the change in this world,” he said.

Through his experience with Jesus Run, Ogar was inspired by the fact that Christ was in the poor and how “they are persevering in their faith.”

For Letty Boelte, a parishioner from Our Lady of Lourdes in Overbrook, she had an eye-opening experience during her encounter with the poor.

“I felt a real solidarity with them in that if certain circumstances were different I too may be on the streets,” she said. After seeing humanity from another perspective, she felt she “was not different from them.”

Luke Bizal, a parishioner of St. Joseph’s in Downingtown and currently a junior at Temple University, was another who was moved by the experience.

Though many would view homeless people as scary, they “are human like all of us.” He suggests everyone should consider going as a group and reaching out to the poor.

“When you gather with other people to help the homeless, you will be amazed at how they are seeking God like we are,” Bizal said.

For Ogar, the best part of his ministry in Philadelphia is the human interactions it brings.

“The best conversations I had with people are in my encounters with homeless people on the street,” he said. “They are the most joyful people I have ever met.”

Although they have no place to lay their head at night, the only thing the homeless people want to talk about is the Lord, Ogar observed. “They are so in love with the Lord, it’s contagious,” he said.

The young adults of the Jesus Run pose for a photo before heading out on the streets to encounter Christ in the poor.