Joy of Socks thrills homeless people, and the man who gives them 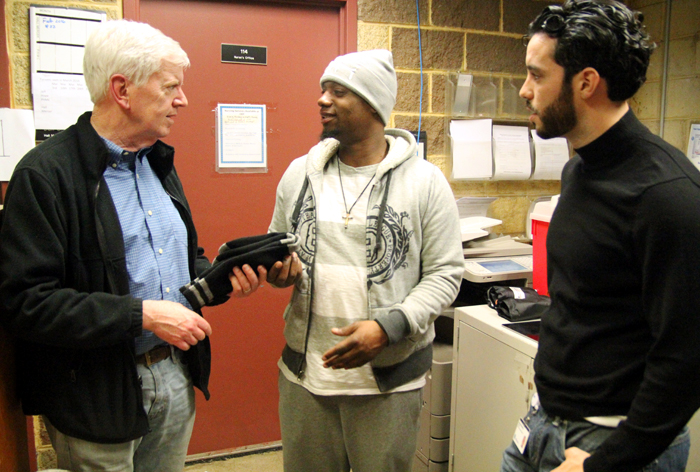 Tom Costello, left, founder of The Joy of Socks, gives a new pair of warm socks to Keith, a visitor to Our Brother's House, a shelter in Philadelphia, on March 3. At right is Gerald Gibbons, a third-year medical student and director of Jeff HOPE Clinic at Our Brother's House, which is fully run by volunteer Jefferson students. (Photo by Sarah Webb) 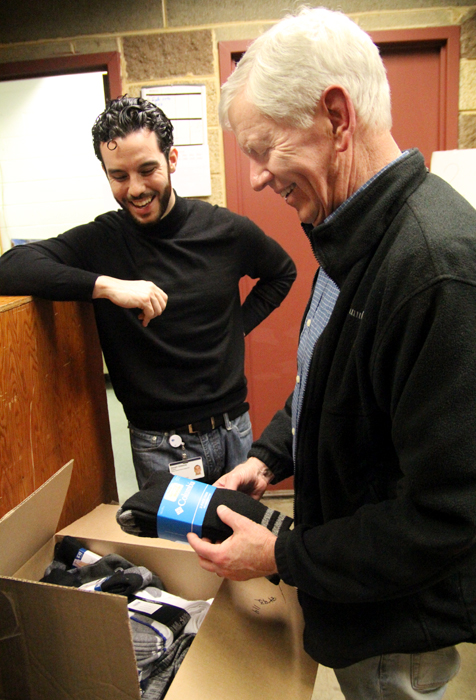 Gerald Gibbons, left, director of JeffHOPE Clinic at Our Brother’s House, is glad to receive two full boxes of socks that Tom Costello delivers as part of The Joy of Socks, the charitable organization he founded. (Sarah Webb)

Tom Costello Jr., 68, is the founder and “Chief Sock Person” at The Joy of Sox, a niche nonprofit 501c3 whose sole purpose is the distribution of socks to the homeless.

Over the past five years, by his estimate, the organization has distributed more than 182,000 pairs of socks to men, women and children living in shelters or on the streets.

The reason this charity is needed, Costello explains, is that while many people donate clothing for the needy, they rarely include socks.

By his own admission Costello, a member of St. Thomas of Villanova Parish in Villanova, was up until about seven years ago an unlikely candidate for outreach to the homeless because of an irrational phobia of street people. If he encountered a homeless person he would cross the street to avoid any contact.

His wife, Nancy, had no such inhibition, and she persuaded him to accompany her to St. Vincent’s Parish soup kitchen in Germantown, where she was volunteering at a meal program for the homeless.

“When we got there, I had a panic attack and couldn’t get out of the car, but she grabbed my hand and took me in. We served breakfast or lunch,” he recalls.

On the way home Nancy mentioned to him many street people have horrendous foot problems because of the need for socks. It took a while for him to get up the nerve to do something, but around Christmas he purchased a large quantity of socks and put them in bags to distribute on their next visit to the soup kitchen.

One lady walked up and said she needed another pair for a friend who wasn’t there. When he dropped another pair into her bag she started to cry, and said, “Nobody has ever given me socks before.”

She reached and hugged him. “I had never touched a homeless person before. I hugged her back, and that was my epiphany moment,” he remembers.

Costello contacted suppliers for donations and also volunteers to help with solicitation of socks and distribution.

What started very modestly at St. Vincent’s and St. Francis Inn in Kensington literally snowballed, especially after a feature story in the Philadelphia Daily News and further publicity on ABC News and the Huffington Post.

A big source of socks are drives conducted by schools — colleges down to elementary.

“The Catholic schools have been wonderful in using this as a service project,” Costello said.

Most recently, SS. Simon and Jude in West Chester, SS. Philip and James in Exton and St. Isidore in Quakertown have conducted sock drives, according to Costello.

As a practical matter, The Joy of Sox finds it most efficient to give the socks to the various outreach programs for distribution to their visitors. So far that has been 61 facilities in the Philadelphia area alone, including Face to Face, Our Brother’s Place, Interface Hospitality Network, Covenant House, St. John’s Hospice, Whosoever Mission, the Salvation Army and Mothers’ Home, just to name a few.

As a practical matter, The Joy of Sox recommends donation of men’s cotton blend crew socks in darker shades, because 80 percent of the people on the street are adult men, and very often they will wear the socks 24 hours a day until they wear out.

While the Philadelphia area is home base, through publicity and the Internet the word has gotten out. Up to this point socks have been sent out to groups in 25 states, the District of Columbia and three other countries.

Costello encourages groups from other areas that wish to run sock drives to look for programs locally that need the socks, rather than to ship them here. In some cases groups simply send money, which is helpful, because although The Joy of Sox relies heavily on volunteer workers, there are such costs as shipping, insurance, postage or buying additional socks.

The furthest away gift so far has been from a donor in Norway who read about the program on the Internet.

On March 3, Costello made a typical drop of a couple of large cartons of new socks to Our Brother’s Place, an emergency shelter for 149 men on Hamilton Street in Philadelphia.

The facility is one of the network of shelters conducted by Bethesda Project, which was founded by Norbertine priests from Daylesford Abbey, Paoli.

On this particular night, volunteer medical students from JeffHOPE, an outreach program at Sidney Kimmel Medical College of Thomas Jefferson University, were on hand to provide routine medical care to transient men, resident or non-resident at the shelter, and assist them in obtaining more critical care when needed.

“This is one of the best things I do, said med student Meredith LaRose. It helps us remember why we are studying medicine.” As for socks, “we take them for granted, sometimes the guys really need them.”

One of the guys was Keith, who said he was in transition waiting for housing.

“Socks are crucial, we do a lot of walking,” he said. “It’s good to have extra socks so you can switch off. It’s going to snow tomorrow and we will definitely need them.” 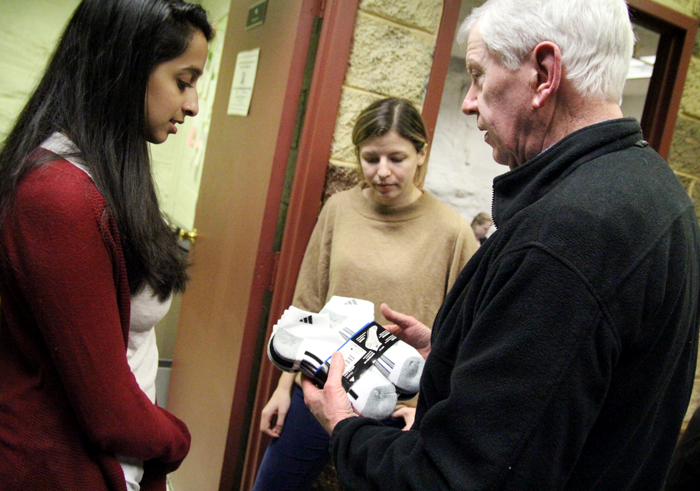