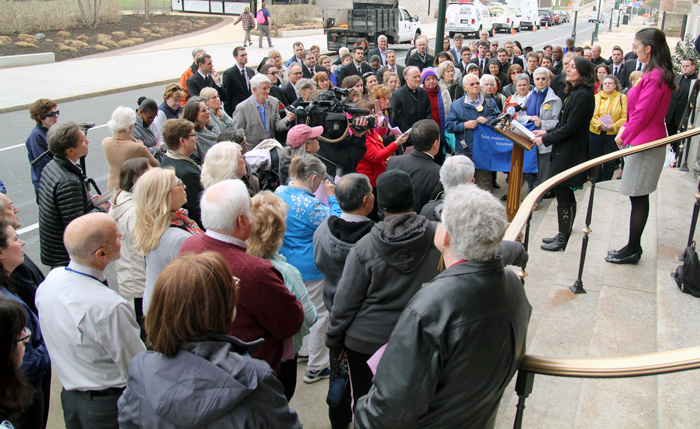 About 100 people gather on the steps of the Cathedral Basilica of SS. Peter and Paul in Philadelphia in support of the Little Sisters of the Poor, whose appeal to the U.S. Supreme Court was beginning at the time of the morning rally Wednesday, March 23. (Sarah Webb)

The slogan on the yellow buttons was catchy — “We’ll Have Nun of This” — and a point of protest was made at a morning rally March 23 on the steps of the Cathedral Basilica of SS. Peter and Paul in Philadelphia where about 100 people came to support the nuns in question, the Little Sisters of the Poor.

(See scenes from the rally in our photo gallery here.)

The religious congregation operates free homes for the indigent aged through the country and the world, including Holy Family Home in West Philadelphia.

The rally, conducted by a group called Women Speak for Themselves in conjunction with the Archdiocese of Philadelphia’s Office for the New Evangelization, was objecting to the “HHS mandate,” the U.S. Department of Health and Human Services regulations under the Affordable Care Act that require employers to provide health insurance including contraception.

While such groups as the Little Sisters, the Catholic dioceses of Pittsburgh and Erie and Catholic Charities organizations, are not required to directly include contraceptive coverage, according to the federal HHS they must report the names of exempted employees to the government, which would then arrange for the coverage.

The Little Sisters and the other appellants argue this reporting mandate makes them complicit in supplying a service that is against their religious beliefs.

At the precise time of the rally at the cathedral, 10:30 a.m., the United States Supreme Court was conducting oral arguments on the case concerning the health insurance plans of church affiliated agencies, including the Little Sisters.

At the rally those in attendance heard an appropriate liturgical reading for the day from the prophet Isaiah: “The Lord is my help, therefore I am not disgraced … I shall not be put to shame, he is near who upholds my right.”

There was also a recitation of the very appropriate Chaplet of Divine Mercy and a collection of personal care items for the residents of Holy Family Home.

After the rally about 10 representatives of Women Speak for Themselves continued the day with an afternoon of direct service to the residents at Holy Family Home, according to Megan Schriever, a local spokesperson who said the Philadelphia event was one of 19 conducted nationally including one in Washington at the Supreme Court.

What the court will decide won’t be known until probably June, but Meghan Cokeley, director of the Office of the New Evangelization, said, “Given the other decisions that have gone in favor of religious freedom I do have hope in this one.”

Ellen Giangiordano of St. Margaret Parish in Narberth suggested the mandate to the church-affiliated entities fails Thomas Jefferson’s test of what is forbidden by the Religion clause of the Constitution, something that “breaks my leg or picks my pocket.”

“It doesn’t break the leg of the Little Sisters, but it picks their pocket,” she said.

Helen Hallowell of Our Lady of Fatima Parish in Secane, who brought 2-month-old daughter Eva Mary with her, said, “How could you not love the Little Sisters of the Poor? We have to speak for them.”