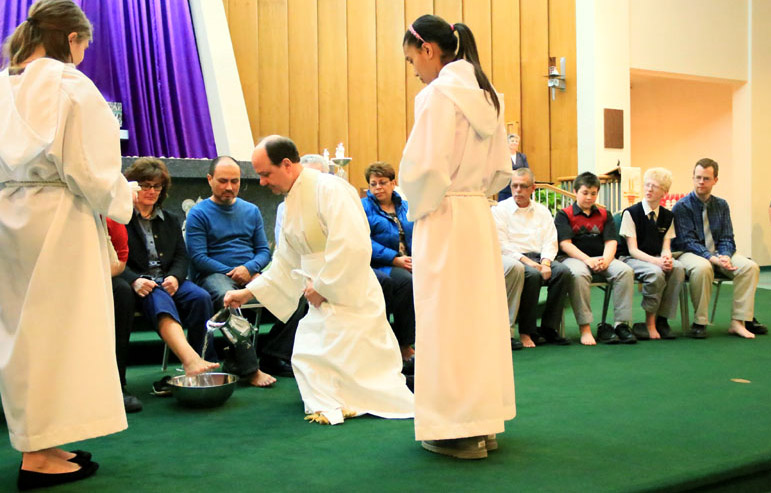 Father Thomas Nasta, pastor of Our Lady of Ransom Parish in Northeast Philadelphia, washes the feet of children, parents, grandparents and members of the deaf community to represent all the people of the parish, on Holy Thursday evening in 2015. (Photo by Sarah Webb)

The next three days will be the holiest – and busiest – days of the year in Catholic churches in the Archdiocese of Philadelphia and the world.

On Holy Thursday morning, the traditional Chrism Mass will be celebrated at 10 a.m. in the Cathedral Basilica of SS. Peter and Paul by Archbishop Charles Chaput and concelebrated by hundreds of priests from across the archdiocese, with a typically full congregation of religious women and men and lay faithful.

During the Mass the archbishop will bless the Oil of Catechumens and the Oil of the Sick as well as consecrate the Oil of Chrism. The oils will be used in parishes throughout the year in the celebrations of the sacraments. Priests at the Mass will also renew the promises made at their ordination.

The Chrism Mass will be streamed live at www.archphila.org and broadcast live on the Catholic Channel on Sirius XM radio as well as Holy Spirit Radio 1420 AM and 1570 AM.

While the cathedral will host the liturgies of the sacred triduum, they will also be celebrated by pastors along with lay people and religious at all parish churches in the archdiocese – find a parish near you through a full list here.

Later on March 24 Lent officially ends with the start of the Mass of the Lord’s Supper at 7:30 p.m. in the cathedral. Archbishop Chaput will lead the celebration and Father Kenneth Brabazon, parochial vicar at the cathedral parish, will preach the homily. The Mass commemorates the Last Supper, during which Christ instituted the sacraments of the Eucharist and holy orders.

Remembering Jesus’ commandment to love one another and following his example of washing the feet of the apostles at the last supper, Archbishop Chaput will also wash the feet of 12 congregants.

Adoration of the Most Blessed Sacrament will continue in the cathedral until 11 p.m.

The basilica will reopen at 9 a.m. on Good Friday, March 25, and from 12 noon to 3 p.m. meditations on the passion of Christ will be presented. Confessions will be heard by priests in the sacrament of penance and reconciliation from 12:30 to 2:30 p.m.

The Celebration of the Passion of the Lord – a solemn liturgy but not a Mass — will take place at 3 p.m. At 7 p.m. the Procesión con el Vía Crucis, Las Siete Palabras, will take place, which is a traditional Good Friday devotion and procession of Hispanic Catholics. The Good Friday liturgies recall prayerfully the crucifixion and death of Jesus.

On Holy Saturday, March 26, the cathedral will again open at 9 a.m. with the celebration of the sacrament of penance at 11 a.m., as Catholics commemorate the day that Jesus lay in the tomb.

The Resurrection of the Lord at Easter begins with the Easter Vigil Mass, the most solemn liturgical celebration of the church year, celebrated by Archbishop Chaput at 8 p.m.

The Easter Sunday Mass schedule at the cathedral includes morning liturgies at 8, 9:30 and 11 a.m., the latter a solemn Mass. Afternoon liturgies are at 12:30 p.m., celebrated by Archbishop Chaput in the basilica, and 2 p.m. in Spanish in the cathedral chapel.

In addition to the Masses at the cathedral and at parish churches, celebrations of the Living Stations of the Cross and other such devotions will also take place in churches, as well as many el Vía Crucis devotions on the streets of communities nearby the churches. Watch CatholicPhilly.com for continuing coverage in these holiest of days.