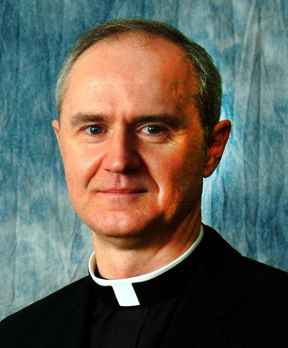 Vincentian Father Gregory J. Semeniuk, 54, who began his duties as Vicar for Cultural Ministries for the Archdiocese of Philadelphia on Feb. 29, faces an awesome challenge in this increasingly multi-cultural diocese.

In keeping with the formal name of the Vincentian Fathers, the Congregation of the Mission, he will in effect be the chief home missionary for the Hispanic Catholics in 36 parishes, 39 other multicultural ministries as well as 15 sites for black Catholics, most of whom have American roots tracing further back than the majority of European Americans.

Like his predecessor, Redemptorist Father Bruce Lewandowski, Father Semeniuk is of Polish heritage. He was born in Chelm, Poland, but raised in Perth Amboy, New Jersey. The name Semeniuk, in its ancient roots from the Tatar language, means “foot soldier,” and he was set on the path of becoming a foot soldier for the Lord early in life.

As the child of an immigrant family, he is very aware of the challenges immigrants face. His task, as he sees it, is to be an advocate for the various groups and also to form a bridge, to connect them to the archdiocese and pastorally to get to know the people, to appreciate their culture and to pray with them.

“The people are very much engaged in the church; their faith is challenged but it is very strong,” Father Semeniuk said.

“In retrospect,” he wrote in a recent letter to his Vincentian confreres, “I see God’s hand moving me to this new ministry. Our Polish parish served as a refuge that allowed my family to shape its faith and Catholic identity, especially through Sunday Eucharist, devotions, culture and Catholic schools.”

He first encountered Vincentians through vocation talks in grade school, then went on to St. Joseph Preparatory Seminary in Princeton for his high school years. He also studied at St. Vincent Seminary in Germantown for a year and at Mary Immaculate Seminary in Northampton, Pa., where he was ordained in May 1989 for the Eastern Province of the Congregation of the Mission.

“As a Vincentian seminarian,” he wrote, “I was exposed to ministry to black Catholics, Hispanic Catholics and other immigrant groups. Prior to entering the major seminary, the Vincentian Community sent me on an extended pastoral experience in the Republic of Panama.”

His first priestly assignment was back to St. Joseph’s Prep in Princeton as director of students. Beginning in 1993, he volunteered for a new Vincentian Hispanic ministry based at St. Martha Parish in Uniondale, in the Diocese of Rockville Centre, New York.

This was a field he had been interested in for some time, especially because of his own life experience and his Panama service. Because his Spanish was not yet perfected, the Vincentians sent him for a three-month immersion program in Guatemala before taking up his new duties. He would remain in Hispanic ministry for 10 years and through it, “I grew to appreciate the depth of Gospel values such as the attention to person, Marian devotion, the care of the suffering and the joy of celebrating life,” he said.

In 2003 he was charged with opening a house of vocation discernment for Hispanic candidates at Miraculous Medal House in New York. He also completed doctoral studies at Weston Jesuit School of Theology at Boston College and successfully defended his dissertation on the writings of Hans Urs von Balthasar and his theology of sacrifice, in terms of the sacrifice of Christ, prayer and Eucharist, and its biblical foundation.

“As a graduate theology student at Boston College,” he recalled, “I studied with priests, religious and laity from Africa, Asia, Latin America and Europe.”

From 2011 to 2015 he was dean of students and a faculty member at his congregation’s St. John’s Seminary in Camarillo, California.

“My experience at St. John’s Seminary helped me see the vibrancy of the church among the Korean, Vietnamese, Hispanic and Ugandan communities,” he said. “The faculty and seminarians from those communities represented the beauty of the multi-cultural face of our Catholic Church.”

At this time Father Semeniuk is the superior at a House of Formation located at the former St. Josaphat Rectory in Manayunk for Vincentian seminarians studying at St. Charles Borromeo Seminary.

Although he will continue in that work, his duties as Vicar for Cultural Ministries will most certainly be a large and important task. It is really a blend of spiritual ministry through the sacraments and catechesis, as well as social ministry with outreach programs and even assistance with immigration issues.

“It can be helping the local ethnic ministries (and) the priests in developing parish-based responses,” he said, and “the lay leaders in the community are very much alive.

“I look forward to this ministry. It adds an element of excitement to my ministry. Philadelphia is a place where the immigrant church blossomed especially through the work of St. John Neumann, who was an immigrant, and St. Katharine Drexel.”

PREVIOUS: She affirms life, right to the end

NEXT: From playground to pro hoops, Beck remains a Philly guy