From playground to pro hoops, Beck remains a Philly guy 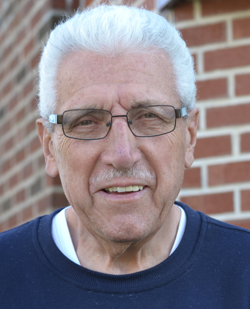 NCAA March Madness has captivated fans in the Philadelphia region especially with Villanova University’s men’s basketball team advancing to the Final Four, where they will take on Oklahoma this weekend in Houston, Texas.

One of those devoted fans who will be rooting for Villanova is Ernie Beck, who not only played basketball in grade school, high school and college, but went on to play for the Philadelphia Warriors in the National Basketball Association.

Beck, now 84, was a member of the Warriors team that won the NBA championship title 60 years ago.

Although Beck has lived in Sacred Heart Parish in Havertown for more than 50 years, he is undeniably a “Philly guy.”

He was born and raised in Southwest Philadelphia and went to Most Blessed Sacrament School and West Catholic High School for Boys. Beck graduated from the University of Pennsylvania and taught and coached basketball at the Edward W. Bok Technical High School in South Philadelphia for more than 30 years.

From the playgrounds of Southwest Philly

His love of basketball started at Mitchell Playground at 55th Street and Kingsessing Avenue which was around the corner from his house in Southwest Philadelphia. “The city built an outdoor basketball court there, and we used to play there all the time,” Beck said. “That’s where I really learned to play.”

At Most Blessed Sacrament School, Beck started playing in the CYO basketball league. That was the beginning of his experience with winning championships. He played on the MBS teams that won national CYO championship titles in 1948 and 1949. 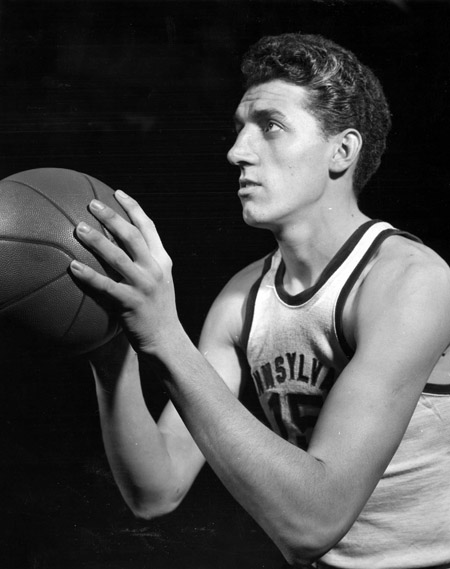 He also played basketball at West Catholic but not until his sophomore year. “I tried out for the freshman team at West and didn’t make it,” Beck said. “I didn’t have sneakers, so I was running in my bare feet at the try out, if you can believe it. People were poor in those days.”

A stellar collegiate career at Penn

Beck decided to go to the University of Pennsylvania and play for Howie Dallmar, who was a member of the Philadelphia Warriors team before he began coaching at Penn.

Although Beck wanted to be an engineer, the science lab courses he needed to take were scheduled in the afternoon. That would have prevented him from making basketball practices. Beck ended up majoring in insurance and at graduation he received the Spoon Award in recognition of his academic and athletic accomplishments.

As a freshman, Beck was not eligible to play on the team but his talent as a shooter and rebounder would eventually help Penn win the Ivy League title in 1953. “We went to the NCAA tournament in Chicago because the Ivy League champ was automatically invited,” he said. “We lost to Notre Dame in the quarterfinal game.”

In the NBA, still a Philly guy

After graduating from Penn, Beck was a first-round draft choice of the Philadelphia Warriors and played on the team for two years. The Korean War was under way, and he received his draft notice to serve in the military.

“I was in the Navy Reserve at Penn so I got myself activated,” said Beck who spent two years at Bainbridge Naval Training Center in Maryland. “My naval career was mostly playing basketball for Bainbridge.”

He got out of the service after two years and returned to play with the Warriors. During the 1955-56 season, Beck said his teammates included great players such as Paul Arizin, Tom Gola, Jack George and Neil Johnston.

At the time the NBA only had eight teams — the New York Knicks, Boston Celtics, Syracuse Nationals and the Warriors in the East, and the Minnesota Lakers, Detroit Pistons, St. Louis Hawks and the Rochester Royals in the West. 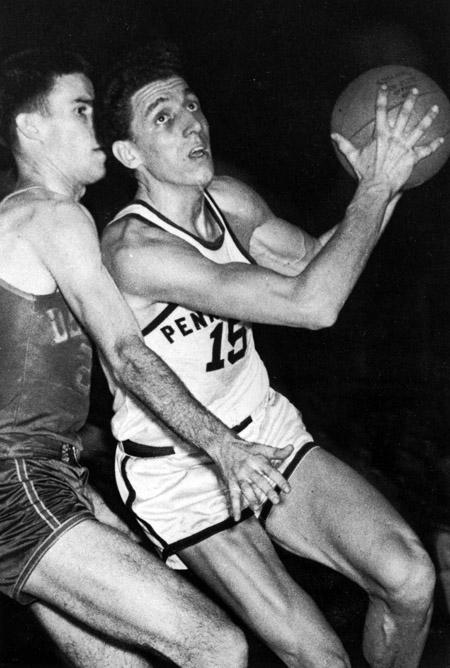 “We defeated Syracuse in the first round of the playoffs, and we defeated Detroit for the NBA title,” said Beck, who still wears the small ring he received as a commemorative of the championship. “Today they give a huge ring,” he added with a laugh.

One of his greatest basketball memories happened during the championship series which was played at the Philadelphia Convention Hall and Civic Center in Philadelphia, which was torn down in 2007.

“I had my best game in the first game of the championship series,” Beck said. “I was the sixth man on the team and came off the bench and scored 24, 25 points in that game. I did have a good series in the playoffs.”

In addition to the championship title, another highlight of his basketball career was playing against the Harlem Globetrotters during the summer months when the team was on a performance tour in South America.

“The Globetrotters were a tremendous basketball team,” Beck said. “I played two summers against the Globetrotters in South America. We were called the Texas Cowboys, but I never rode a horse in my life.”

Beck also had the opportunity to play with Wilt Chamberlain, one of the all-time great Philadelphia basketball players.

“I played with Wilt for one year; that was great,” he said. “When Walt came up to play for the Warriors, we went all over the United States. We played in California for the first time, San Francisco and Las Vegas, all because of Wilt. They all wanted to capitalize on the attraction of Wilt.”

Centered on the Catholic faith

While basketball has been an important part of his life, Beck’s faith has also been a mainstay. He and his wife Betty attend daily Mass either at Sacred Heart or at a neighboring church.

“Betty is a convert, and she’s a better Catholic than I am,” Beck said. “We got in the habit of going to Mass every day. We feel we start the day off right when we go to Mass.”

Beck remains physically active and enjoys playing golf, walking and maintaining his lawn or meeting up with friends and family. Even then, he doesn’t ignore his faith.

“I always have a rosary with me. I carry it in my back pocket,” he said. “When I’m driving in the car by myself I always say a rosary.”

Beck, who enjoys walking on a nearby track, prays the rosary as he does his laps. “Two laps around the track I do the joyful mysteries,” he said. “Sometimes if I’m walking good, I’ll do around seven laps and get through the joyful mysteries and maybe the sorrowful and glorious mysteries.”

Still a fan, and still a Warrior

Watching pro and college basketball games on TV continues to be one of his favorite activities.

“Pro ball has always been my main interest after I stopped playing, although I love the college game,” Beck said. “I love to watch the Golden State Warriors with Steph Curry. I’ve never seen a young player as good as him.”

As a former Warrior, Beck was invited to go to San Francisco last year when Golden State won the NBA championship. “I hate to fly, so I turned it down,” he said. “I feel so bad that I didn’t do it.”

Although Beck didn’t make the trip, the Warriors sent him a copy of the championship ring, a small trophy and a jersey. “I gave the ring and the trophy to my grandson,” he said. “I gave the jersey to my nephew because he loves pro basketball.”

He was able to attend the Sixers-Warriors game in Philadelphia on Jan. 30 where the Warriors emerged with a 108-105 victory, thanks to a last-second three pointer. “The Sixers were losing by 20 points, and they tied it up. It was a great game. It’s a shame they lost, but I enjoyed the game.”

Beck is planning to watch the Villanova-Oklahoma game Saturday night, and it’s a safe bet this Philly guy will be praying for a Villanova victory.

PREVIOUS: Philadelphia’s rivalries give way to love for Villanova in Final Four