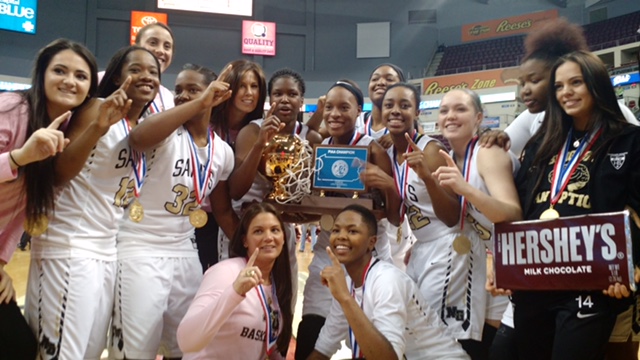 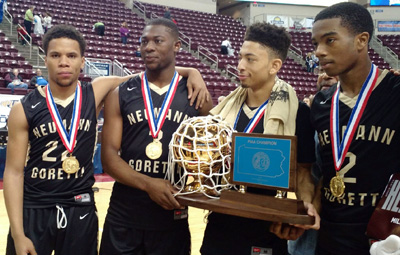 Some members of the Neumann-Goretti boys squad proudly gather around the championship trophy they earned at the PIAA state finals March 18 in Hershey, Pa.

Both basketball teams – the boys and the girls – had just lost in the Catholic League championship; the girls to Archbishop Wood, and the boys to Roman Catholic. Finding a smile on a Saints player, coach, or fan posed quite a daunting task.

“They’ll feel this for a while,” said boys’ coach Carl Arrigale. “This won’t go away anytime soon.”

Both coaches, however, predicted that their players still possessed enough drive and energy to make the most of the upcoming PIAA post-season. Just give the players some time to gather themselves, they said. The season isn’t over.

Fast forward to this past Friday night, March 18. Read everything above, and turn it around to be just the opposite.

At the Giant Center in Hershey, both Neumann-Goretti teams emerged as state champions. A few hours after the girls annihilated North Star High School, 65-28, to win the Class AA title, the boys followed suit in a Class AAA tilt against Mars High School, pounding the aptly-named Fightin’ Planets by a misleadingly close 99-66.

Both teams had successfully defended last year’s crown, though for the boys, it marked their third straight and sixth state championship in seven years. In the process, the boys established a new state championship game record for points and simultaneously tied another record for largest margin of victory in the 97 years of the PIAA’s existence.

“That’s more like it,” said junior Quade Green, after contributing 25 points and nine rebounds. “This feels a whole lot better than it did (in the Catholic League championship loss). We obviously would have liked to win both and will always be disappointed that we didn’t get the job done, but this is definitely a great way to end the season.”

“Our offense plays best when we’re hitting our threes,” said Arrigale. “We were unselfish and moved the ball well. When we do that, we’re at our best.”

“When they’re shooting the ball from the outside like that, they have to be one of the best teams in the country,” said Carmody. “They are very strong and physical. They don’t have any weaknesses.”

“We just kept playing our game,” said senior Zane Martin after an electric 33-point performance. “We didn’t slow down. Just kept coming at them.”

“Everyone made the most of their playing time,” said Martin. “Great team effort.”

Many of the Neumann-Goretti girls stayed around to watch their male counterparts, undoubtedly in a happy mood throughout the six-hour lull before tipoff. Their championship effort befitted a surgeon’s approach to an operation – methodical, confident and thorough.

“We wanted to make a statement,” said University of Syracuse-bound senior Alisha Kebbe, who led all scorers with 20 points. “We didn’t want to just go through the motions. This was our last chance to do something very special and we wanted to play the entire tournament hard.”

As they did during their state title march last winter, the Saints (29-1 this year, 59-1 over two years, and 88-2 over three years) did not toy around with any of their opponents. The unfortunate North Star squad (28-3) was barely able to get the ball up court, as the Saints forced 27 turnovers.

“We never care about who gets the glory,” said Kebbe. “We’ve always tried to play like a team.”

N-G’s players echoed their coach, Andrea Peterson, who constantly preaches the importance of defense. Never had the Saints been as dominant.

“Coach talks about it all the time,” said Smalls. “It starts with defense.”

Players from both squads said that having both genders win a state championship is especially meaningful because it benefits the entire community. They should know, for this is the second straight season that both teams returned home with gold medals.

It also means the season is over, and that saddens Peterson.

“When you realize that there is no practice tomorrow, it’s sad,” said Peterson. “We’ve been working with these seniors for the last three or four years. They’re like our own kids. So it’s great to go out on top for them.”

“They wore that uniform proudly,” she said.

NEXT: Philadelphia’s rivalries give way to love for Villanova in Final Four