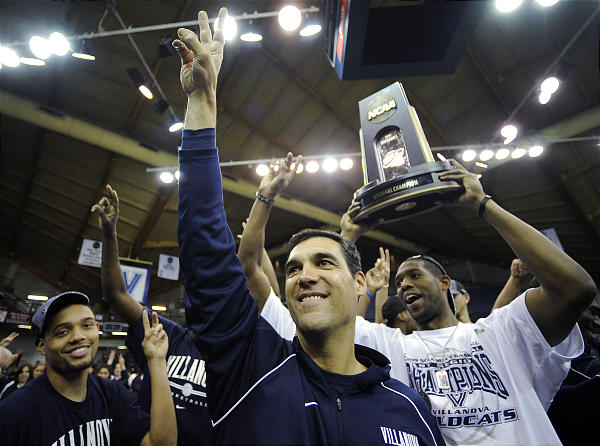 Villanova men's basketball Coach Jay Wright celebrates the last time his squad went to the Final Four of the NCAA tournament, in the 2008-2009 season.

Two patrons were standing in line at a local fast-food location trying to figure out what to order. They were both Villanova University basketball fans.

Why have only conditional love for Villanova? It turns out they don’t even attend ‘Nova, never have attended ‘Nova, and possess no emotional ties to the university. Davis attended Temple University; Becker, Ursinus.

These days, however, it doesn’t seem to matter where a local person attended – or attends – college. Most appear to be rooting hard for Villanova as it prepares to play Oklahoma tomorrow night in Houston. The winner will face the survivor of North Carolina vs. Syracuse in the NCAA Division I basketball championship two nights later.

Heck, take a walk around bitter rival St. Joseph’s University and you’ll see people donning blue and white instead of crimson and gray. Well, a handful of people, but more than you’ll ever see at any other time of the year.

“One of the wonderful things about Philadelphia is the overall knowledge and enthusiasm of its fans,” said Villanova coach Jay Wright. “Deep down, Philadelphia wants Philadelphia to do well, whether it’s professional or college. People in Philadelphia identify with Philadelphia.”

Part of Villanova’s support lies in the likability of its coach. No matter what the situation, Wright always displays a level emotion. He listens to a question, thinks about the answer, and then delivers what usually amounts to an eloquent response.

Wright has remained consistent after wins, after losses, during halftime interviews … and his players have noticed.

“He’s our leader,” said senior captain Ryan Arcidiacono. “He doesn’t get too up or too down. He’s a great person and a great coach.”

Arcidiacono said that although the Wildcats have maintained a “business-like” countenance not only this year but for the past four, he, his teammates, and his coaches understand how fortunate they are to be representing a college whose mission is built around its Catholic Augustinian heritage.

“It’s a special place,” he said. “It’s a privilege to put on the uniform, to even be associated with Villanova. I love this school.”

Arcidiacono echoed his teammates when reporting that the Wildcats are not “caught up” in the media circus that is invariably connected to the Final Four.

“People are excited,” he said. “They have a lot of questions. It’s a nice part of everything, and it’s surreal, but we are not getting caught up in that type of thing. We really are focused on preparing for the game.”

When the tournament teams were announced, Villanova was one of 10 Catholic colleges in the field. Dayton, Iona, Holy Cross, and Seton Hall lost in Round One. Xavier, Providence, and St. Joe’s fell in Round Two. Gonzaga was ousted in the Sweet 16, and Notre Dame advanced to the Final Eight.

The Cats are the only Catholic team remaining.

“Hopefully we will be the only team left on Monday,” said Arcidiacono.

That’s a sentiment that all Philadelphians can rally around.

NEXT: From playground to pro hoops, Beck remains a Philly guy