At meeting, priests hear of call to show mercy in everyday life 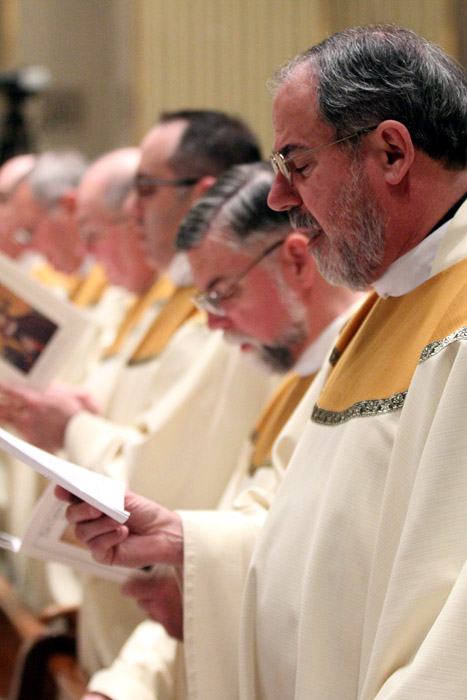 Msgr. Thomas Mullin, seen at right at the Holy Thursday Chrism Mass at the cathedral, gave a talk at the Spring Workshop for Priests of the Philadelphia Archdiocese April 12 in Cape May, N.J. (Sarah Webb)

Priests of the Philadelphia Archdiocese heard one of their own present a talk on the Biblical foundations of mercy during the April 11-14 Spring Workshop for Priests held in Cape May, N.J. The theme of the gathering — “The Priest, Missionary of Mercy” — tied into the Jubilee Year of Mercy initiated by Pope Francis.

“The more deeply we reflect upon the grace/favor, the mercy/kindness, and the compassion of the God of the Old Testament covenant, the more clearly we will appreciate Jesus as the fullest revelation of the Father of Mercies,” Msgr. Thomas M. Mullin, pastor of St. Elizabeth Parish in Upper Uwchlan, Chester County, told the priests in his talk April 12 at the Grand Hotel in the South Jersey resort town.

“And,” he continued, “the more readily we might embrace our call as priests and ministers to manifest this divine mercy in our daily interactions with fellow priests and with the People of God.”

The pastoral reflections of Msgr. Mullin, a former professor of Sacred Scripture at St. Charles Borromeo Seminary, on divine mercy in the Old Testament included “a brief look at divine mercy in the Torah,” citing covenant foundations in Exodus, wilderness wanderings in Numbers and covenant renewal in Deuteronomy.

“In the end, the Old Testament prophetic and wisdom writings confirm Pope Francis’ conviction that ‘God’s Name is Mercy,’” Msgr. Mullin said. “To live as disciples of Jesus Christ, in whom the fullness of God’s mercy has been revealed, demands that we accept God’s mercy and forgiveness in our everyday dealings with each other and the people we serve.”

“What is in my mind and heart?” Father Esposito challenged priests to ask themselves when discerning their own “practical approaches” to the spiritual and corporal works of mercy, since “on such things we will be judged,” he quoted Pope Francis as saying in his Lenten Message for this Jubilee Year of Mercy.

“Detachment from self” is essential, Father Esposito insisted, because “we priests are sought after for mercy.”

His pastoral reflection on the spiritual works of mercy included assigning a word for each letter in the word mercy — for example, M stands for Marian devotion; E stands for the gift of the Eucharist; R stands for the sacrament of Reconciliation; C stands for Charity, the heart of mercy; and Y stands for our personal “Yes” that we say or renew.

“Mary has successfully preceded us on our pilgrimage of faith,” Father Esposito said. She is our “role model for the spiritual and corporal works of mercy” because “her immediate impulse,” when she learned that she was to become the mother of Jesus, “was to help (her cousin Elizabeth) and not to look for a throne to sit on.”

Reconciliation was achieved for us because “God first sacrificed his Son for the forgiveness of our sins.”

Charity is the “essence of our life” enabling priests to “live in harmony in one mind and heart intent upon God,” Father Esposito said, adding, “’yes’ is our response to God’s call.”

The Spring Workshop for Priests was also offered April 5-7 at Malvern Retreat House, and will be offered April 18-21 at the Grand Hotel in Cape May, N.J.