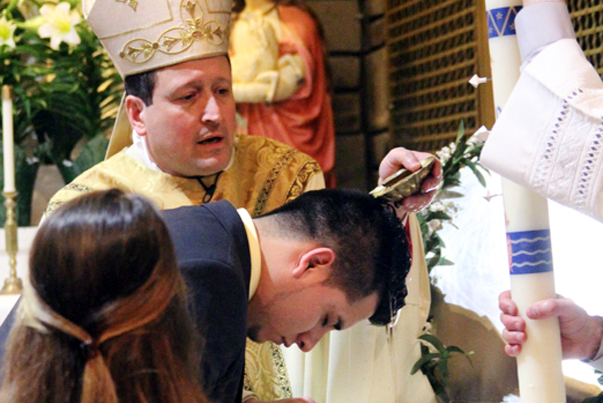 This year, according to statistics compiled by the archdiocesan Secretariat for Evangelization, 587 men and women were received into the Catholic Church through parish RCIA programs (Rite of Christian Initiation of Adults) this year.

That included 246 previously unbaptized catechumens and 341 previously baptized candidates who will be confirmed by Archbishop Charles Chaput on May 15, Pentecost Sunday, at the Cathedral Basilica of SS. Peter and Paul in Philadelphia.

Still, by examining the 2016 stats there might be lessons to learn.

The catechumens and candidates this year all came from 118 parishes, which means more than 100 parishes had no catechumens or candidates.

The statistics point out three parishes with the highest number of catechumens and candidates — Holy Innocents with 25, St. Veronica with 23, and Visitation B.V.M. with 21 — have two things in common. All three are in Philadelphia-North, an area of the archdiocese that has generally been losing its Catholic worshipers; but more to the point, all three parishes include a flourishing Hispanic population.

St. Joseph Sister Kathleen Anderson, who has been coordinator of parish life and ministry for the past nine years at Holy Innocents, said of the candidates and catechumens for the parish, 22 were Hispanic and two were Vietnamese.

“Historically we have always had a significant number from the Hispanic community,” she said. “Many were baptized before they came and complete their sacraments here. We do offer RCIA in both Spanish and English, and have Hispanic catechists, but some will choose to take it in English.”

At St. Veronica, where all the candidates and catechumens are Hispanic, most of the classes are conducted in English because the majority of those who come are Puerto Rican and bilingual.

“Every May we start with fliers and messages and in the parish bulletin,” explained parish’s director of religious education, Mother Incarnation, a member of the Servants of the Lord and the Virgin of Matara. “We are happy with the program. It brings people to the church or back to the church. Many are moms who bring their children who are coming to religious education classes and they stay for the adult classes.”

Visitation Parish also homes in on the parents or family members of PREP students (Parish Religious Education Program) to instruct catechumens and candidates, according to Redemptorist Father John Olenek, the pastor.

“We have the RCIA classes at the same time as the classes for children who are in CCD,” he said. “Three of our candidates are Vietnamese, the rest are Hispanic.”

Again, although the people will generally attend the Spanish Mass, most are bilingual and attend RCIA in English, but there is one Sunday class for those who are not fluent in English.

As a special feature, this year at Visitation there will also be a joint marriage celebration for those members of the RCIA class who were not married sacramentally or living as a family without marriage.

“This year our community is really jumping and we have two really good coordinators for the Hispanic ministry in Tom Boylan and Paul Witte,” Father Olenek said.

Many other archdiocesan parishes have a larger-than-average number of catechumens and candidates. Some of them have Hispanic ministry and some do not.

Of course the welcoming of new members into the faith around the Easter season is a universal ritual throughout the nation and the world.

As reported previously on CatholicPhilly.com, the largest American group was in the Archdiocese of Galveston-Houston which welcomed 2,240 candidates and catechumens.

Other dioceses and archdioceses with numbers reported in excess of 1,000 include Los Angeles, New York, Washington, Newark, Fort Worth and Orange (Calif.).

PREVIOUS: Earth Day to be observed in ‘Catholic style’

NEXT: At meeting, priests hear of call to show mercy in everyday life