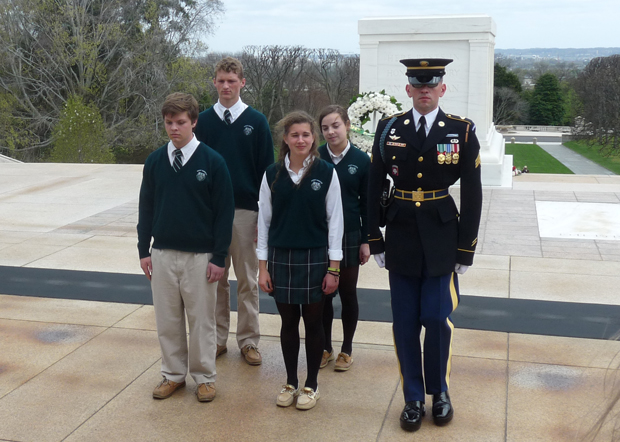 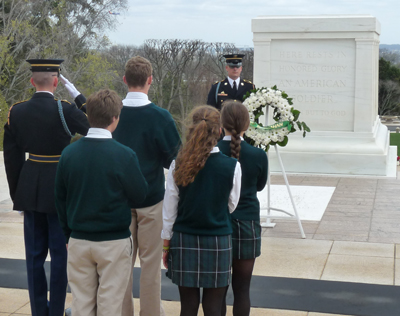 Students of Bishop Shanahan High School participated in a wreath laying ceremony March 31 at the Tomb of the Unknown Soldier at Arlington National Cemetery.

For the eighth time Shanahan teacher Roger Arthur led students of his Honors U.S. History Themes classes from the archdiocesan high school in Downingtown to Arlington, Va., for the solemn ceremony, which he arranged with the cemetery and for which Bishop Shanahan provided the wreath.

Selected by the 43 students on the trip to represent them in the ceremony were Lauren Ciarrocchi, John Kozinski, Margaret Boncek, and Patrick Nulty.

Following the Changing of the Guard Ceremony at the tomb, the Relief Commander of the 3rd U.S. Infantry Regiment (the Old Guard) accompanied the four students down a staircase toward the Tomb of the Unknown Soldier where they were met by a wreath bearer who had ceremoniously carried the Bishop Shanahan wreath to the site.

The students moved forward to accept the wreath and the wreath bearer then assisted Ciarrocchi and Kozinski in placing the wreath on a stand before the tomb. A bugler sounded “Taps” before all four students were escorted back to their places.

“I felt honored,” said Boncek, “to be able to experience the changing of the guard and the wreath laying up close. It was a powerful moment, especially because we were honoring not only the unknown soldiers who died in the wars, but also all who devote their lives to our country.”

Several students were able to locate and visit their relatives’ gravesites while at Arlington National Cemetery.

PREVIOUS: Local refugees recall peace in the Middle East, not long ago