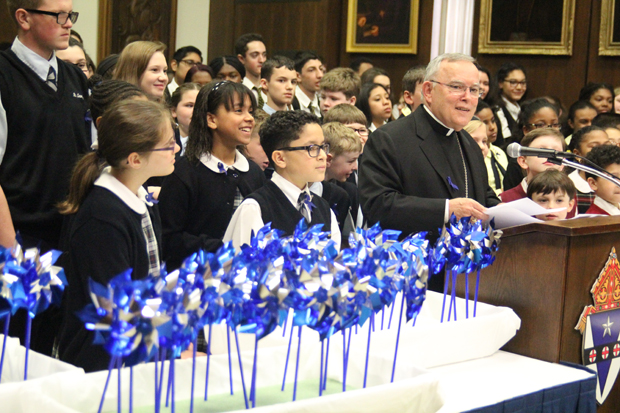 Archbishop Charles Chaput leads about 150 students April 7 at the Archdiocesan Pastoral Center in the "Pinwheels for Prevention" event, part of the National Child Abuse and Prevention Month, in April. (Photos by Sarah Webb) 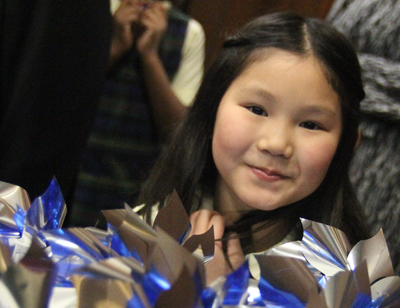 Justine Weng, third grade student at St. Francis de Sales School in Philadelphia, is one of more than 150 students to plant her “Pinwheel for Prevention” April 7 at the Archdiocesan Pastoral Center during National Child Abuse Awareness Month in April. (Photo by Sarah Webb)

The students who came from 13 Catholic schools and the archbishop displayed the blue and silver pinwheels, which he called “symbols of a carefree childhood,” at the Archdiocesan Pastoral Center in center city Philadelphia. (See a photo gallery here and watch a video here.)

Due to expected rain in the morning, the event was moved inside but organizers for the archdiocese plan to display the pinwheels publicly outside the center’s doors on 17th Street.

In his remarks Archbishop Chaput noted that all children in Catholic schools and Parish Religious Education Programs in the Philadelphia Archdiocese receive safe environment training, which can enable them to spot potential child abusers and guard against abusive behavior. 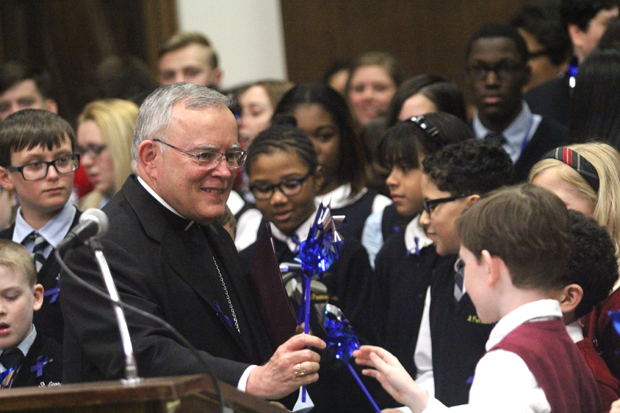 He said the church shares in that duty “with motherly care,” but added, “we haven’t always lived up to our responsibilities.” He went on to stress the church’s commitment to continue its child protection programs.

In addition to more than 100,000 students completing safe environment training each year – more than a million children have received the training through church educational programs since 2003 – the archbishop also said 92,000 adults who have regular contact with children in any Catholic setting throughout the archdiocese have been trained on child protection and safe environment best practices since 2003.

Leslie Davila, director of the archdiocesan Office for Child and Youth Protection, said between 6,000 and 9,000 adults in the archdiocese are mandated to receive the training each year. They also must obtain criminal background checks and child abuse clearances. The adults include mandated reporters (a class of child supervisors required by Pennsylvania law to report suspected child abuse) as well as clergy, lay and religious employees and volunteers.

The office she leads has spent $2.4 million on education and training programs in the archdiocese since 2006.

It also reaches out to help survivors of childhood sexual abuse — men, women and children — and their families heal from their experience. A fact sheet from that office indicated that in the fiscal year ended June 30, 2015, the archdiocese spent $1.7 million for the needs of survivors. Services included counseling, medication, help with travel and child care, and vocational assistance.

By training adults and children on how to recognize improper conduct and to report it, the goal of the archdiocese is to build a strong network of awareness of the issue of child abuse throughout society in order to prevent future crimes against children.

The annual pinwheel event on Thursday was an outgrowth of the national “Pinwheels for Prevention” movement that was developed as a grassroots initiative by a secular organization, Prevent Child Abuse America. 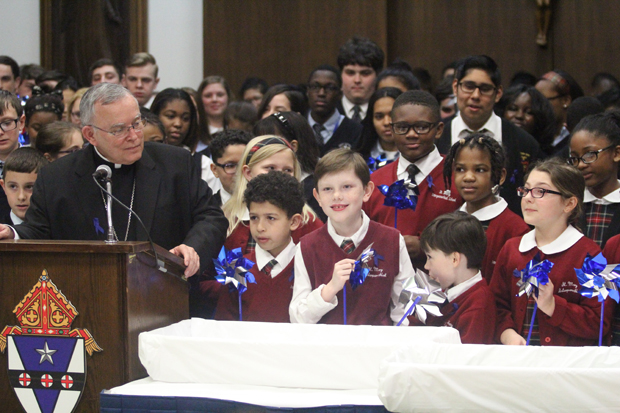 NEXT: Archbishop Chaput: Thankful for pope’s thoughts on marriage, family