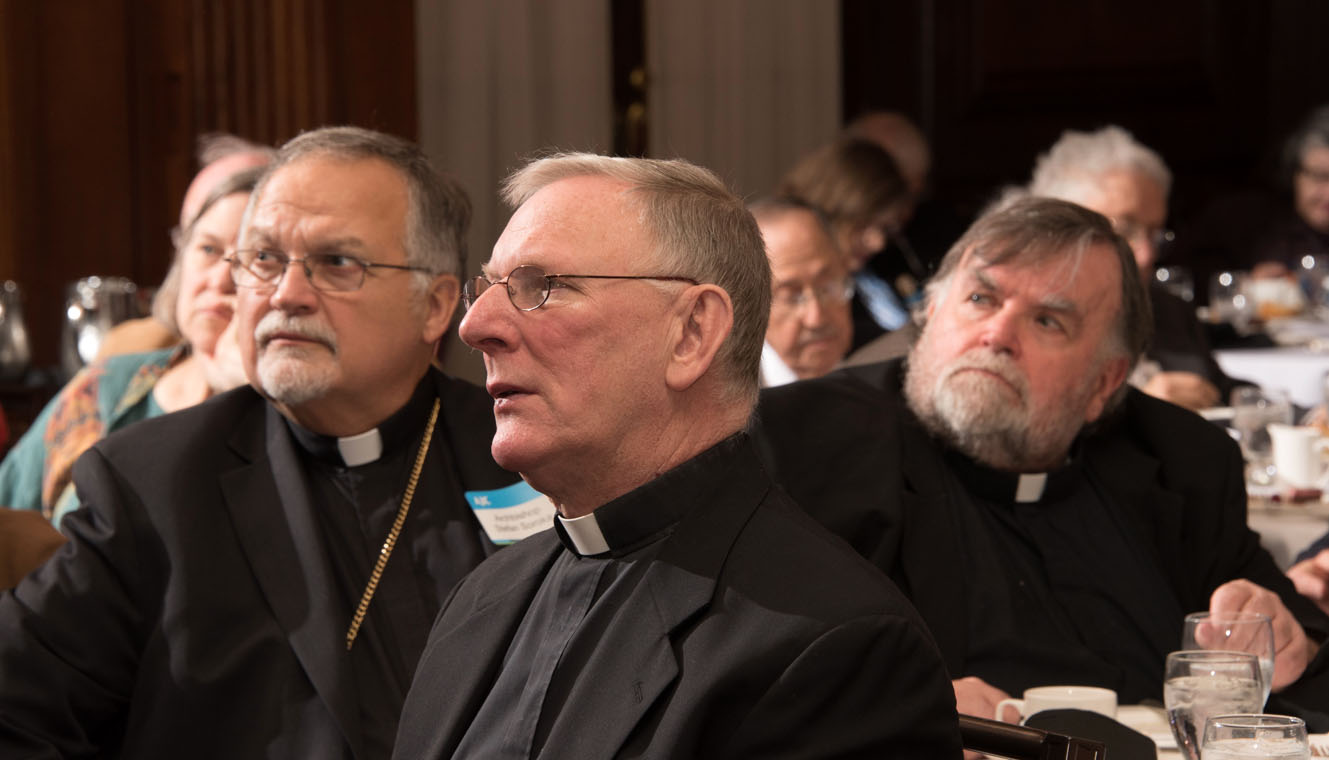 Local clergymen including Ukrainian Catholic Archbishop Stefan Soroka (left) and Ukrainian priest Father John Fields (right), listen to lecturer Felice Gaer speak April 11 in Philadelphia about violations of religious freedom around the world, and what might be done to address them.

A lecture sponsored by the American Jewish Committee April 11 in Philadelphia drew a range of Christian supporters, including Catholic leaders, who heard a clear message of interfaith solidarity on religious freedom.

Felice Gaer, director of the AJC’s Jacob Blaustein Institute for the Advancement of Human Rights, urged her audience at the Union League in center city to speak out for religious minorities worldwide.

“We have an obligation to speak out for those who are voiceless,” she said in the annual Murray Friedman Memorial Lecture.

It was a result of various partnerships including the Archdiocese of Philadelphia, the Ukrainian Catholic Archeparchy, Bucks County Christian Coalition, Temple University’s Dialogue Institute, the Knights of Columbus, the Institute for Jewish-Catholic Relations at St. Joseph’s University and the Jewish Community Relations Council of the Jewish Federation of Greater Philadelphia.

“We pray that the word peace — shalom, Salaam — may not only be a word of greeting, but may become a reality in the troubled Middle East and throughout the world, ending the religious persecution and genocide that has become a scourge in this, the 21st century,” he said.

Emphasizing the need for peace especially in the Middle East, Archbishop Soroka quoted the three Abrahamic traditions on peace in citing a passage from the Torah, a prayer attributed to the prophet Muhammad and the well-known prayer of St. Francis.

“Each of us here today,” said the archbishop, “from our respective religious traditions knows all too well the suffering our brothers and sisters have suffered throughout history, especially during the 20th century and in the present age.”

The AJC has a special obligation to do so, she said, adding “those who know what it is to be denied their rights also have a particular duty to speak up” when they see others so violated.
She presented a number of case studies from around the world as illustrating the ongoing of abuses of religious freedom, which she categorized into two groups: abuse by non-state actors such as the Islamic State and other violent militant groups; and governments themselves, which disguise oppressive policy in the form of laws sanctioning a particular morality or “public safety.”

Many of these cases involved Catholic and Christian people across China, Egypt, Syria, Pakistan, and Eritrea.

Gaer tirelessly drove home what she called “the universalist approach” to stopping the oppression of others, which calls for people to speak out on behalf of those in need, regardless of what they believe.

The approach was one of “focusing on the deed, not the creed,” she said, explaining that people’s common faith or lack thereof should have no bearing on one’s outrage at discrimination levied toward others.

“Judaism,” she said, “holds that the moral ills of this life can be overcome here, now.” This can-do attitude, she said, was a call to arms in a broken world.

Congressional action, she argued, would translate to larger visibility to the issue — and sanctions against those countries who violate the rights of others.

“They need to hear that you and your congressman care about these issues, and that they are not just abstract ideals,” she said.

Archbishop Charles Chaput, who served on the U.S. Commission on International Religious Freedom with Gaer between 2003 and 2007, was unable to attend Monday’s lecture. In his stead Msgr. Michael Carroll, the archdiocese of Philadelphia’s former director of ecumenical affairs, was invited to deliver closing remarks in line with the day’s theme.

“We live in a time of great amnesia,” he said, believing that people easily forget about threats to religious freedom. “To borrow from the Psalmist: ‘They have mouths but do not speak; they have eyes but do not see; they have ears but do not hear.’ We must not stand by and do nothing, but instead oppose evil and build amid civilization’s ruins.”

“There is no better time than now,” Gaer added.

The day’s lecture was organized by the Philadelphia and Southern New Jersey branches of the American Jewish Committee, which was established in 1906 to aid Jewish refugees fleeing anti-Semitic violence in the Russian Empire.

Today it is one of the oldest religious advocacy groups of its kind in the United States. It aims to raise awareness of civil liberties issues and advocate for nondiscrimination — both for the Jewish people and, in Monday’s case, religious minorities. 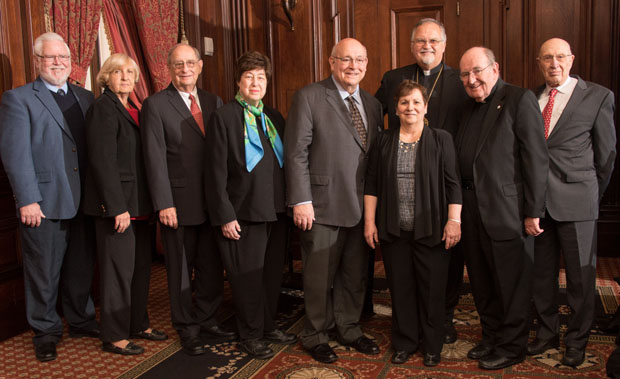 NEXT: Earth Day to be observed in ‘Catholic style’