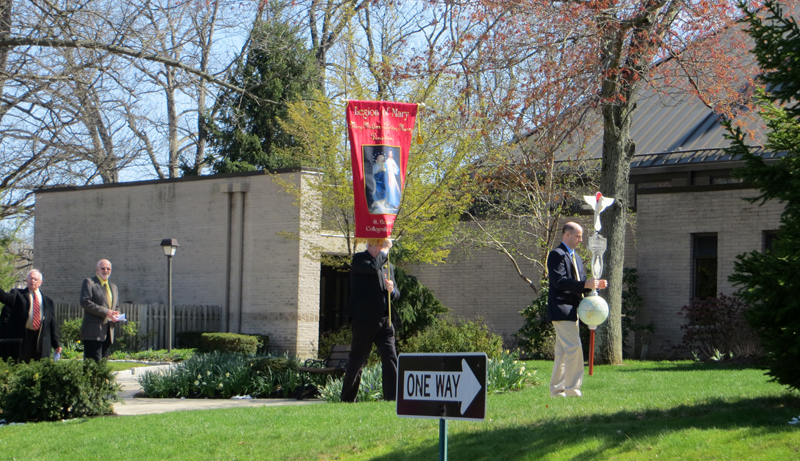 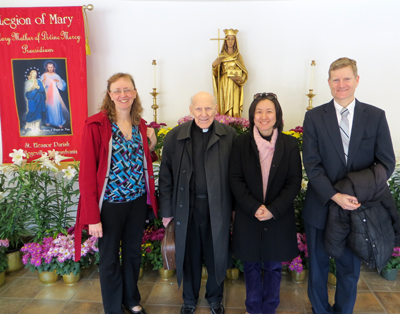 At the Acies ceremony April 10 at St. Eleanor Church, during which members of the Legion of Mary renewed their consecration to the Blessed Mother, are (from left) Edel Lukens, Father Francis Lendacky, Susie Guhm and Chris Vounas Lane.

Members of many of the thousands of units worldwide in the Legion of Mary assembled Sunday, April 10 at their local churches to participate in a unique ceremony called the Acies, according to Bob Nowak, an officer with Mother of Mankind Praesidium, a local unit of the Legion in the Norristown area.

The observance typically is celebrated near the Feast of the Annunciation, the commemoration of the visit of the Angel Gabriel to the Blessed Virgin Mary to inform her that God had chosen her to be the Mother of Jesus, and her acceptance of this momentous duty.

The feast day is usually March 25 but was delayed this year until April 4 because of the Easter season, which meant most Legion groups delayed their Acies ceremony.

For the ceremony, members of their local group gather at a church for a ceremony which includes a procession, prayer, a talk by the presiding priest, Benediction and most important, renewing their commitment. One by one, each member approaches the altar and renews his or her consecration to the Blessed Virgin by reciting, “I am all yours, my Queen and my Mother, and all I have is yours.”

In Nowak’s case, he and other members of the Commitium participated in their annual Acies renewal ceremony at St. Eleanor Church, Collegeville, on Sunday afternoon.

In so doing they were participating in a ritual established by Frank Duff, who founded the Legion of Mary in Dublin, Ireland, in 1921. As an apostolate it has since grown to approximately 3 million men and women as active members worldwide and millions more as auxiliary members.

Duff, along with two other distinguished Legion of Mary leaders, has a cause for canonization under consideration in Rome. When the Legion was established by Duff, in the very beginning it was all women, according to Christine Coakley, who is president of the Philadelphia Senatus, because he was also a member of the St. Vincent de Paul Society and did not want to take members away from that.

Membership very quickly changed to men and women which is logical because the charisms of the two are quite different. In general one might say the SVP Society has a greater emphasis on charity while the Legion of Mary is more oriented to spirituality, especially the spirituality of St. Louis de Montfort. 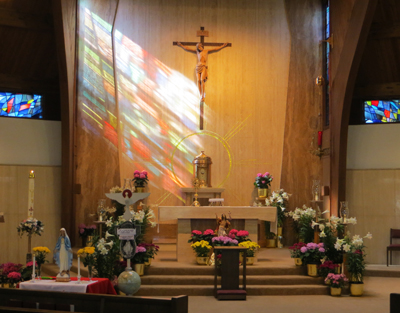 The sanctuary of St. Eleanor Church includes a small shrine to Mary, used during the Acies ceremony in which Legion of Mary members in the Norristown Commitium renewed their consecration.

Organizationally it has a bit of a military flavor with the basic parish unit called the praesidium, which harkens back to the Roman Praetorian Guard, the elite unit of the Roman army. Other units in ascending order go up to senatus, eight of which are in the United States and finally, the Concilium in Dublin.

There are eight senatuses in the United States, including the Philadelphia Senatus which includes all of Pennsylvania, southern New Jersey, Delaware and a small section of Maryland.

“My group is Our Lady of the Nativity Praesidium, which meets at Nativity of Our Lord Parish” in Warminster, Coakley explained.

There are also different levels of membership, although full members attend weekly meetings that include the rosary and other prayers based on the Magnificat, along with apostolic work.

One example of such work is that of Nowak, who volunteers at the Brother House ministry for homeless and needy men in Norristown.

“If able, it includes daily Mass and Communion and reading a couple of sections of the Liturgy of the Hours,” said Al Taggert, a past president of the Philadelphia Senatus.

While the various groups of the Legion of Mary held their Acies at churches throughout the Archdiocese of Philadelphia, the Senatus Acies was held at St. Vincent de Paul Church in Germantown on April 10. 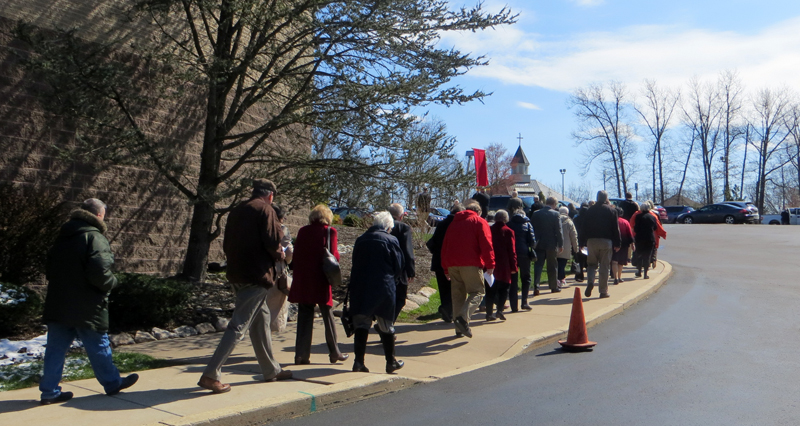