Monthly music fest moves the young, and others, to deeper prayer 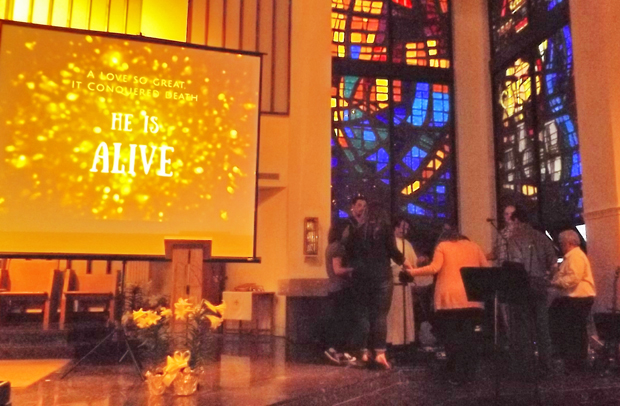 The Christian praise band Firehill Worship prays together before leading a song for the 150 or so worshipers at Festival of Praise April 1 at St. Norbert Church, Paoli. Lyrics to all their songs were displayed on a large screen for all to follow along. 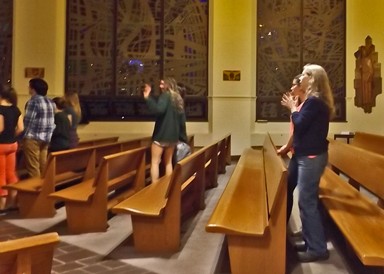 If you ever go near St. Norbert Church in Paoli on a Friday night early in the month, don’t let your ears fool you. You’re nowhere near a major amphitheater where some rock band on tour is performing, although it might sound like it.

Instead that thunderous noise is coming from inside the church, where the parish’s monthly Festival of Praise is taking place.

Led by the eight-piece praise band Firehill Worship, the event takes place every first Friday. Starting at 7:30 p.m., the ensemble leads worshipers through two hours of music that alternates between slow ballads and songs that raise the roof. Every lyric is projected on a large screen so that people can sing along.

On a cold and rainy April 1, the evening started as the lighting became subdued. Then leader Mark Griswold told the roughly 150 attendees, “John Paul II said, ‘We are an Easter people and “Alleluia” is our song.’ We want to give glory to our resurrected Lord and put aside anything that would cause us to worry or have anxiety and focus on this miracle of Jesus risen from the dead for you and me.”

With that Firehill launched into the first of many rousing numbers that brought the assembly to its feet. Many people raised their hands in prayer and didn’t let them down.

And while one would expect the event to attract only the very young, that is far from the case. In the congregation were couples, families, small children, seniors, teens, young adults, a religious sister, those who have only just recently qualified for AARP, and all other age brackets.

Naturally, there were a fair number of teens in the audience, including a group of 20 or so from Bishop Shanahan High School in Downingtown, as well as a smattering of Devon Prep, public school, and homeschooled students.

By the movements of one teen girl, it seemed evident that she felt every sentiment of each word projected on the screen. But there was also a woman who looked to be in her late 60s who was giving her younger sister a run for her money, a passionate intensity etched on her face.

It wasn’t all music, however. There were also times of silence.

For instance, after a half-hour of rousing praise music, the parish’s parochial vicar, Norbertine Father Carl Braschoss, placed the monstrance on the altar. Afterward the smell of incense subtly wafted through the church and remained in the air the rest of the evening.

Father Braschoss told CatholicPhilly.com that Festival of Praise began “10 to 15 years ago” under the aegis of Father Dominic Rossi, another Norbertine who currently serves as pastor of St. Gabriel Parish in Philadelphia but who previously served as pastor of St. Norbert’s.

A musician and composer, Father Rossi brought together other musicians for Sunday Mass and then started this monthly custom once the church’s oratory was built.

Asked why the event has lasted so long and draws such a diverse crowd, Father Braschoss pointed to the music enjoyed at the Festival.

“The music is very reverent even though it’s contemporary and appealing to the young, but I think it really spans the generations,” he said. “People respect music of all types that is really reverent and really does want to praise the Lord. So that’s what draws people together.”

He loves the fact that it draws families together, and adds, “It’s wonderful to be a part of this.”

For her, the greatest value is that it is “a time outside of Mass to give myself to (God) that’s different than the sacraments and different than silence. It doesn’t matter what age you are, the (Festival of Praise) gives you the opportunity to give glory to God through the power of worship and to encounter him in a different way,” she said.

Devenney noted that the sense of “surrender” in Festival of Praise “allows the community to come together and grow in what God desires for us and in the gifts that we’ve received from him,” she said.

Although she emphasized Catholics need the Eucharist, Scripture and the shared prayer of the Mass, the Festival of Praise “is important because in this setting some people allow themselves to have their walls broken down and” experience Jesus in a close and personal way, Devenney said.

Some people would prefer more traditional hymns or even chant and polyphony with their Catholic liturgy, and Devenney acknowledges the Festival of Praise is not for everyone.

“We all have different ways to enter in communion with God,” she said, adding the Festival is the best way for her.

On the way out to her car, St. Norbert parishioner Ann Cusumano recalled she has been coming to the Festival of Praise for the last two or three years. Her reason is simple.

“I find it very uplifting,” she said. “I am touched by the whole spirit of the whole group and by the families with children that come. It’s just inspiring.”

Asked what this experience gives her, Cusumano’s answer is similarly simple.

“It fills me with peace and joy.” 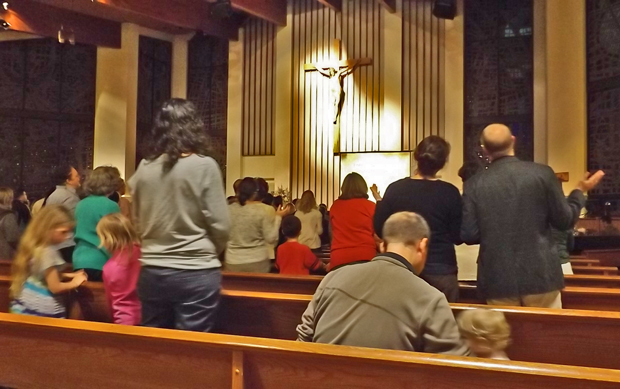 PREVIOUS: Three parishes in So. Phila., two in Delaware County, will partner in June