Three parishes in So. Phila., two in Delaware County, will partner in June 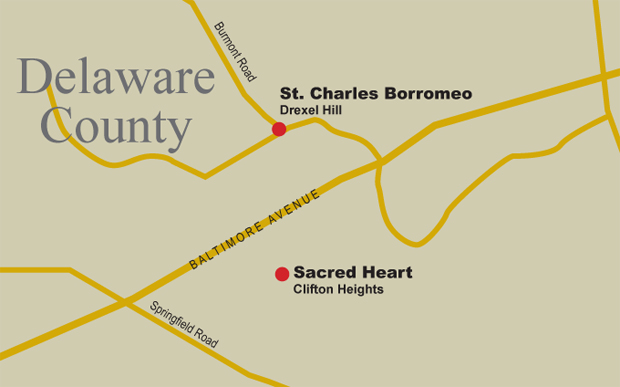 Two nearby parishes in Delaware County will engage in a partnership whereby they will remain open but share one pastoral administrative staff. (Graphic by Barbara Hagan) 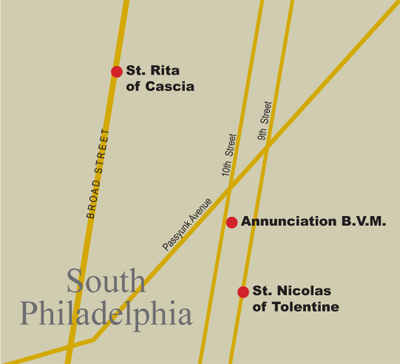 Three parishes in South Philadelphia, along with two in Delaware County, will enter a partnership in June. (Graphic by Barbara Hagan)

As announced last weekend, two groups of parishes in South Philadelphia and Delaware County will engage in a “partnership.” The relatively new concept in the Archdiocese of Philadelphia’s pastoral planning process calls for parishes and their churches not to close but to be managed jointly by one pastor.

The National Shrine of St. Rita will continue to operate as a separate entity from the parishes.

Key to the partnership arrangement is the Augustinian order of priests, who currently staff both St. Rita’s and St. Nicholas parishes, each with a pastor and three to four Augustinian priests serving as parochial vicars or in residence.

Because of the presence of many Augustinian priests and the close proximity of the parishes in South Philadelphia — St. Nicholas is located only four-tenths of a mile, or seven blocks, from Annunciation — the pastoral service to parishioners in the partnership is different than that announced for Delaware County.

Each parish currently has a resident pastor. Sacred Heart had 520 registered households in 2014 and St. Charles 2,220, for a total of 2,740 households among the two.

Under the partnership, as in South Philadelphia, one parish administration will serve both parishes and their churches will remain open. The Delaware County parishes’ plans also were reviewed by the Strategic Planning Committee and approved by Archbishop Chaput.

Both partnership plans go into effect in June, according to a statement from the Philadelphia Archdiocese.

A similar plan was announced for five parishes in Philadelphia’s Port Richmond section, the first phase of which will occur this June and the final phase in 2017.

NEXT: Monthly music fest moves the young, and others, to deeper prayer