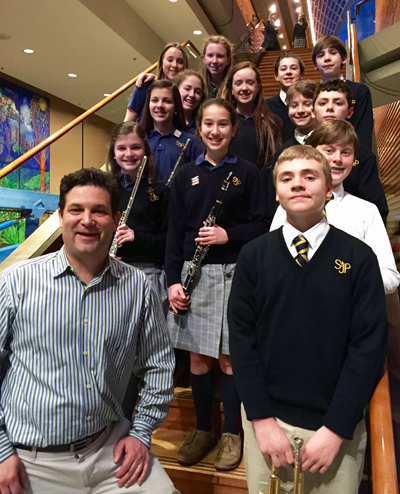 Alex Schmauk stands with his students from St. Joseph the Protector School, Glenside, before their performance with the Archdiocesan Honor Band at the March 22 Concert of Excellence at Philadelphia’s Kimmel Center.

“The proof of the pudding is in the eating,” according to the old proverb. When it comes to school bands, one might say the proof is how well they do under peer review.

St. Joseph the Protector School, a medium size elementary school in Glenside, does very well indeed in that respect.

This year St. Joseph’s had 13 music students invited to play at music festivals and concerts, including participation in the 90-student Archdiocesan Honor Band that performed at the March 22 Concert of Excellence at Philadelphia’s Kimmel Center.

The band made a smooth transition as one of the premier elementary school bands in the Archdiocese of Philadelphia.

While St. Joseph the Protector is his major school band directing work, he also teaches at St. Genevieve, Flourtown and St. Basil Academy, both of which had students play at the Concert of Excellence.

He is also the founder of the Jenkintown Community Band  and the Alexander Brass Quintet.

His wife, Melia Repko Schmauk, is an accomplished harpist and also a graduate of Peabody and New England Conservatory. She teaches music at Queen of Angels School, Willow Grove, and their daughter, Elsa, 7, just stated on the clarinet.

His personal passion, starting from his high school days, has been the trumpet, and he plays regularly with local Philadelphia orchestras and symphonies and also with bands or artists that happen to be passing through, most notably with Josh Groban, Maureen McGovern and the rock band Kansas.

Teaching elementary school students was not his original intention as a career but he has found it surprisingly rewarding, especially so in the local Catholic schools because they do not graduate students into a separate middle school. He can start children at fourth grade and continue with them all the way through to eighth grade.

“The elementary and middle school years are fun, there is no baggage,” Schmauk said. “They are very excited and don’t know what they can’t do; they are very teachable.”

St. Joseph’s has about 65 kids in the band, mostly trumpets, saxophones, flutes and clarinets, with a smaller number of percussion instruments.

Schmauk will teach them in very small groups during the day in weekly half-hour sessions, with the larger band rehearsals after school. He finds very small groups with students at approximately the same level of advancement to be the most effective way to give them the individual attention that is needed.

“When you see the excitement and pride in the eyes of a student when they hit a perfect note or complete a flawless performance, you know you’ve made a difference,” Schmauk said.

For him, the greatest joy is seeing these children — many of whom started with him in fourth grade — go on to high school and college where they will continue their music and some become music professionals themselves.

Who knows? They may be teaching the next generation of children the joy of music.

In addition to support of the parents, “school support is making the music program successful,” Schmauk believes. “The teachers and the administration are fabulous. It is really a pleasant environment. It wouldn’t be if teachers were rolling their eyes when a child is taken out of the classroom for a music lesson. They want to do well and of course, because I am there three days, if there is a test or something the lessons can be flexible.”

One of the clarinetists at this year’s Concert of Excellence was eighth grader Mary Theresa O’Hara, is the seventh child in her family to be trained by Schmauk tracing back to the Immaculate Conception School years.

“Mr. Schmauk teaches more than music,” she said. “He teaches us about hard work, believing in ourselves and in giving back and sharing our blessings and talents with others.”